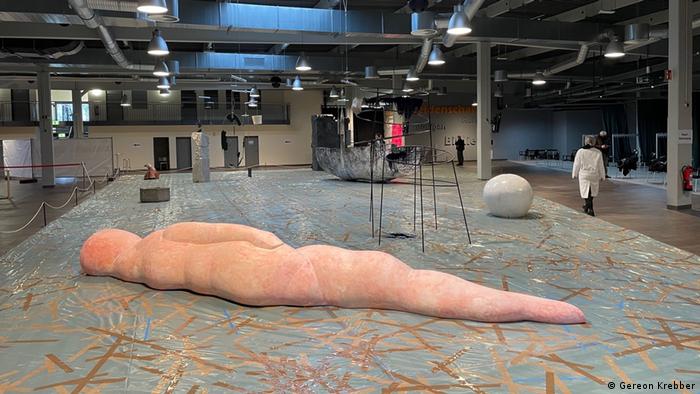 Sculptures at the Bottrop vaccination center

A pink human-like shape lies on the floor; something that looks like a bear's claw juts from a rock-like sculpture; a kind of half-pipe and large marble blocks offer glimpses of their insides.

Gereon Krebber, a sculptor and professor at the Düsseldorf Art Academy, has transformed part of the large steel-and-concrete hall of the Bottrop vaccination center into a sculptural landscape.

Weeks before people would come in to be vaccinated, the city of Bottrop in western Germany therefore unexpectedly found itself with a new venue for culture.

The project is grabbing attention, because like everywhere else in the country, cultural events and institutions are all in lockdown. Bottrop, which usually holds an annual organ festival and a puppet theater festival, is no exception. The Josef Albers Museum, named after the former Bauhaus teacher and famous son of the city, is also closed. 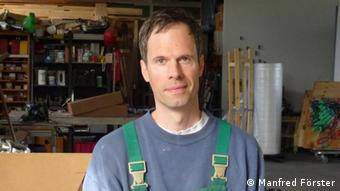 The open space in the vaccination center came in handy as Bottrop native Gereon Krebber was supposed to show his sculptures at the new extension of the Josef Albers Museum. "We in Bottrop have, what we have," Bottrop city spokesman Alexander Pläsken told DW.

So a new art space in the vaccination center is a nice coincidence, even if the center hasn't opened its doors yet due vaccine shortage. For now, mobile vaccination teams are touring the city's retirement homes to administer the first doses of the vaccine.

But the artworks at the vaccination center are bound to have an effect — not against the virus, of course, but perhaps they can help take people's minds off the dire situation for a short moment.

'Microscopic but not visible'

"I wanted to find images for something that is there on a microscopic level but not visible," Krebber said — images for the invisible, deadly threat.

His sculptures are a mix of amorphous and architectural forms, which should not come as a surprise in light of the fact that he studied with two artists who work with opposing formal languages, Tony Cragg and Hubert Kiecol.

Krebber told DW he sees himself as a "sculptor of discord," but he emphatically does not want to come across as an "illustrator of the pandemic." He is concerned with analogies, and wants people who see his artworks to find themselves in the works' physicality. 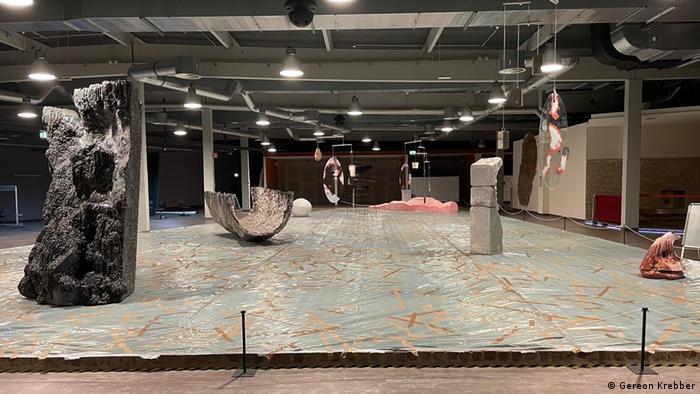 "This is a really tough place," mused Krebber, whose objects contrast with the hall's stark business-like optics. Of course they meet all the requirements to contain fire hazards.

On a silver platter

For fire safety reasons, Krebber had to cover the hall floor with plastic sheeting — but the ground sheet works well with the art objects, presenting them as if on a silver platter.

Bottrop is not the only German city that presents artworks in a vaccination center: the Bavarian city of Straubing put up art by regional artists on the walls. Art can help get a grip on the mental stress caused by the coronavirus crisis, argued Krebber, adding, "But you can also walk past it and don't have to look at it. That's the nice thing about it!"

How the coronavirus crisis inspired the cultural scene

The pandemic hit the arts sector particularly hard. With new concepts, theaters, clubs and museums have tried to make the best of a difficult situation.