Out of principle, the German government refused to take part in military action against Libyan dictator Gadhafi. But it appears selling arms to both sides of international conflicts has never been a problem for Berlin. 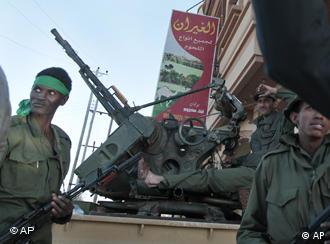 Gadhafi's soldiers fight with weapons made in Germany

At the end of February, a shaky video appeared on YouTube showing Moammar Gadhafi's son Saif al-Islam addressing a raucous crowd in Tripoli. Struggling to keep the regime supporters quiet long enough to speak, Saif promises that weapons will be handed out to fight the opposition forces. As if to show what kind of weapons he means, Saif waves a large machine gun.

This gun has been identified as a Heckler and Koch G36, manufactured in Germany. It's the standard weapon of the German army, is used by police forces around the world, and is considered one of the deadliest assault rifles there is. 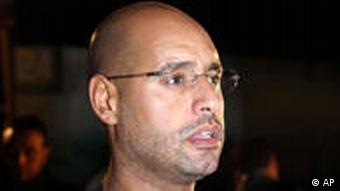 Saif promised to arm his supporters to fight the opposition movement

No-one knows exactly how Saif got his hands on one of these. Heckler and Koch, a world-leading gun manufacturer based in the leafy town of Oberndorf in southern Germany, were not allowed to sell the weapon to Libya, and they say this one is either a dummy, or was bought illegally. This is not unlikely - anti-arms activists believe nearly every terrorist group in the world is equipped with Heckler and Koch guns.

Jürgen Grässlin is a veteran activist and chairman of the non-governmental organization Armaments Information Bureau (RIB), which seeks out the details of Germany's weapons exports - both legal and illegal. He has received a lot more requests ever since popular uprisings began in the Middle East and North Africa earlier this year. Many journalists and politicians have been calling to find out precisely which German weapons are being used to suppress which opposition movements in which countries.

Grässlin discovered that in 2009 Heckler and Koch legally sold 13,000 rounds of ammunition for its G3 and MP5 machine guns to the Bahraini government.

"Now we see that in the last few weeks, the Bahraini police has used weapons, including these machine guns, against the democracy movement," Grässlin told Deutsche Welle. "We Germans are once again participating in killing around the world, in this case in Bahrain."

While Gadhafi was not allowed to buy any Heckler and Koch guns officially, he obtained plenty of other German weapons legally. For instance, the German-French owned EADS supplied Gadhafi with 168-million euros ($240 million) worth of anti-tank missiles, plus a number of tank transporters and other military vehicles.

It was inevitable that when the weapons embargo against Libya was lifted in 2004, respected German brands like Daimler and EADS would move in. In some cases literally - EADS even opened an office in Tripoli. Mark Bromley, a researcher with the Stockholm International Peace Research Institute (SIPRI), confirms that this was part of a general move.

"There was certainly quite a broad push by a number of defense companies, often with the support of their own national governments, to try to access a potentially lucrative arms market in Libya," he told Deutsche Welle.

But Bromley is not convinced Germany is a worse offender than any other European country. "If you look at the German export reports, Germany has granted licenses to export military equipment to Libya, but it was also denying quite a lot of licenses in the last couple of years, particularly ones for small arms and light weapons ammunition," he says.

"Italy, in contrast, recently granted quite a large license for the export of small arms to Libya, and Belgium granted a more limited one a couple of years ago."

Supplying both sides of the front

Any kind of armed conflict is good for weapons makers, but it's ideal when the customers are on both sides of the front. Since EADS also helps to build the Eurofighter Typhoon jet currently being flown by NATO, that is exactly the situation in Libya.

"If, as in the case of Libya, the EADS has supplied weapons to both sides, then management can really crack open the champagne, because then the war profits are higher," says Grässlin. "Then the shareholders get more dividends and the managers get a raise."

Most of Germany's major weapons manufacturers declined to talk to Deutsche Welle for this report, but Heckler and Koch did answer some questions in writing. The company argued that the defense industry is part of a worldwide security infrastructure.

On top of that, the written statement said, "A national defense industry ensures control, the independence of political decisions, and underlines the sovereignty of the state. For example, for the fighting troops in Afghanistan it is vitally important that their demand for high-quality and reliable manufacturers is covered."

"Every weapons export goes through a very tight vetting and authorization process, which is tied to a political evaluation of the reliability of the destination country," it went on. "The German weapons export law is among the strictest in the world."

SIPRI researcher Bromley agrees that Germany has relatively tight export control laws, but it's undeniable that the German government has done much to keep its arms industry happy. Over the past decade, it has approved more than double the amount of German weapons exports. As a result, the country is now the third-biggest weapons exporter in the world, behind the USA and Russia, with a market share up from 6 percent to 11 percent. 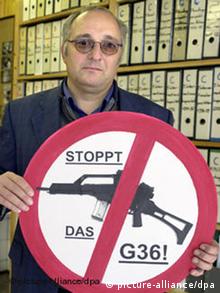 Germany now supplies 20 percent of the weapons in the developing world, where the vast majority of the world's wars are currently being fought. According an annual report for 2010 from the independent peace organization Bonn International Center for Conversion (BICC), Germany provided weapons to 40 countries whose human rights record was described as "questionable" - mostly in the Middle East, Latin America and South East Asia. Bromley says this is a new trend.

"Germany has had a reputation in the past for being a bit more restrictive with regards to certain destinations, particularly in the Middle East," he said. "That was probably more true in the past than it is now. I think Germany is now a bit more in line with other European states."

Grässlin says that what makes German weapons exports unique is the hypocrisy involved. While the two biggest weapons' exporters, the US and Russia, have a history of military intervention since the Second World War, Germany has always made a show of being pacifist. It was apparent in the opposition to the Iraq war, the reluctance to send troops to Afghanistan, and it was made clear again in March, when Merkel refused to vote for the United Nations resolution on military action in Libya.

Both the German Foreign and Economics Ministries declined to comment directly on Grässlin's accusations, but the Economics Ministry referred Deutsche Welle to its annual weapons exports report. In its explanation of the approval process that governs weapons exports, the report refers to a principle agreed by the cabinet on January, 19, 2000: "Armaments exports are categorically not approved if there is 'sufficient suspicion' that the armaments in question are being used for internal repression or other continuing and systematic human rights abuses."

In the cases of the EADS deals with Libya and the Heckler and Koch deals with Bahrain at least, it appears this principle was disregarded.

It's the gap between the human rights rhetoric and the active encouragement of the arms trade that Grässlin finds most "sickening."

"In Germany the contradiction is really extreme," he said. "They say on the one hand they don't deliver weapons to countries that abuse human rights, but then every year you can read in the weapons exports reports which human rights-abusing countries have been supplied with German weapons. There is no area of German foreign and economic policy that is so dishonest and which has so many consequences in terms of the number of victims than the arms industry."

New revelations exposing the extent of US funding to Syrian opposition groups could complicate US efforts to reengage with Syria at a time when the country's regime faces a serious challenge to its authority. (20.04.2011)