Europe tries to reconcile Libya criticism with booming arms exports | World | Breaking news and perspectives from around the globe | DW | 24.02.2011

Could Libyan leader Gadhafi be using weapons produced in Europe to crush the revolt against his regime? As governments grapple with the uncomfortable issue, a new report details brisk weapons sales by EU states to Libya. 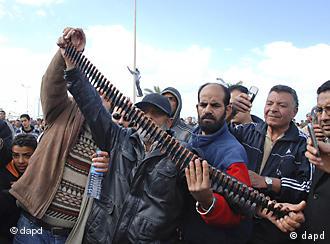 First published in January, the report has attracted renewed scrutiny after an escalation of violence against a popular uprising in the North African country.

The EU document, which refers to annual figures in 2009, says the bloc's member states granted export licenses worth 343 million euros ($470 million) to Libya. Italy was shown to have approved exports worth 112 million euros, the most taken up by military aircraft.

It was followed by Malta which, according to the report, authorized the sale of an 80-million-euro consignment of small arms. However, the Maltese embassy in Berlin said in a written statement to the Deutsche Welle that the findings were inaccurate and that Malta does not produce or export weapons.

Earlier, the Maltese government said in a statement that the Mediterranean island nation was only used to transit a shipment of weapons belonging to an Italian-licensed company. It said the arms did not "touch "dry land in Malta because the operation was conducted at sea.

Germany was third on the list, with 53 million euros of licenses, mostly for electronic jamming equipment used to disrupt mobile phone, Internet and GPS communication.

Analysts say the sales by themselves aren't surprising. In 2003, Gadhafi agreed to abandon efforts to acquire chemical, biological and nuclear weapons, effectively ending his international isolation. The following year, the EU lifted an arms embargo on Libya.

"Libya at the time had a huge amount of old, out of date military equipment dating back to the Soviet era and was looking to modernize its armed force," Mark Bromley of the Stockholm International Peace Research Institute (SIPRI) told Deutsche Welle. "It was the perfect opportunity for western arms companies to get a foothold in this lucrative market and incredibly oil-rich country." 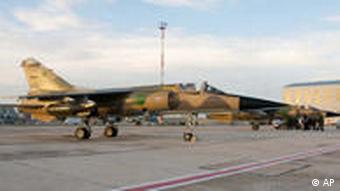 It's a trend that's continued. While Russia remains the biggest arms supplier to Libya, European defense companies, mainly from France, Italy and Germany have been steadily increasing business ties with Libya.

The US notably has largely kept out of the country's defense market.

"As opposed to Europe, the general perception in the US is to take a much harder line on Gadhafi," David Hartwell, Middle East analyst at UK-based IHS Jane's told Deutsche Welle. "There's a lot of political pressure within Congress not to do big business with Gadhafi after the Lockerbie bombing," he said.

Hartwell estimates that America's defense ties with Libya are in the region of hundreds of millions of dollar with most exports related to communications technology and not actual military hardware.

With defense budgets shrinking in several western nations, many arms companies have been scouting around for new markets beyond Europe and the US.

"EU arms sales both to North Africa and the Middle East have soared in recent years," Kaye Stearman of the British arms control group Campaign Against Arms Trade (CAAT) told Deutsche Welle. "For example between 2008 and 2009, in North Africa alone, they went from just under one billion euros to two billion euros."

While the sales may not have attracted attention, the brutal suppression of popular uprisings across the Middle East and now Libya has raised uncomfortable questions for western governments.

Could European-made arms technology have been used by authoritarian regimes to silence their own citizens? Analysts say that's hard to prove but reports that governments both in Bahrain and Libya may have done just that have sparked angry debates and accusations of double standards in some European countries.

In Britain, Prime Minister David Cameron this week revoked licenses for arms sales to Libya and Bahrain after fears surfaced that British tear gas or riot equipment may have been used against political demonstrators.

In Germany, there are worries that its electronic exports to Libya could have possibly been used by the regime to jam internet and GPS services.

Some point out that the concerns over the Libyan crackdown and its link to European arms provides a chance for the European Union to rethink and improve its mechanisms for arms exports.

The EU's 27 member states are bound by a code of conduct to share information about arms licenses and exports, including to sensitive destinations and countries that were subject to embargoes. 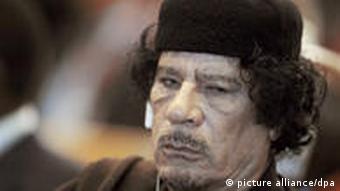 Gadhafi has relied on western arms exports to modernize his army

"It’s a good opportunity to have a focused debate on what was licensed to Libya since 2004 and how systems of information sharing and risk assessment could be improved." Bromley said.

But some believe only a complete halt to weapons exports to North Africa and the Middle East can ensure that arms don't end up in the hands of despots.

"Only if we stop selling arms to these countries, then their governments have much less chance of repressing their populations," Kaye Stearman said.

She added however that there's little sign of that happening.

British Premier David Cameron who was on a tour of the Middle East this week paid a visit to the International Defense Exhibition (IDEX) in Abu Dhabi with more than 1,000 companies showing their military equipment and services. Cameron was accompanied by eight leading British arms industry executives.

"That sends an absolutely disastrous signal to pro-democracy movements in the Arab world," Stearman said.

Opinion: Europe should take a stand against the Gadhafi regime

After the successful uprisings in Egypt and Tunisia, the Libyan people are also trying to free themselves from totalitarian rule. Ute Schaeffer looks at how Europe should respond to this movement. (22.02.2011)