The newly elected prime minister of Armenia has walked out of a live broadcast meeting immediately after it began. Police later arrested opposition leader Nikol Pashinian. 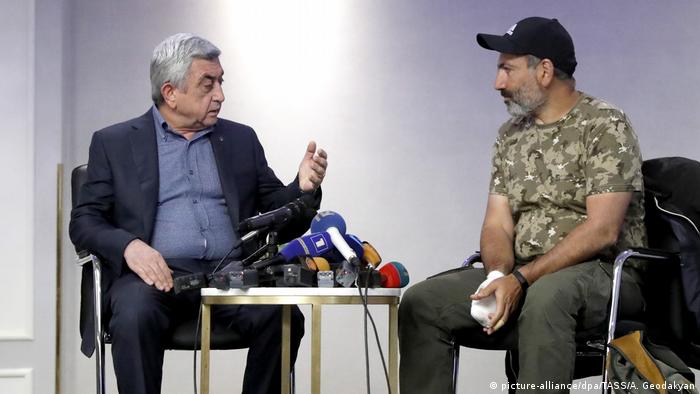 The failed meeting came after tens of thousands of people staged daily mass protests for more than a week against Sargsyan's attempt to maintain his grip on power.

Read more: Tens of thousands call for PM Serzh Sargsyan to step down after 'power grab'

How the live broadcast meeting went down 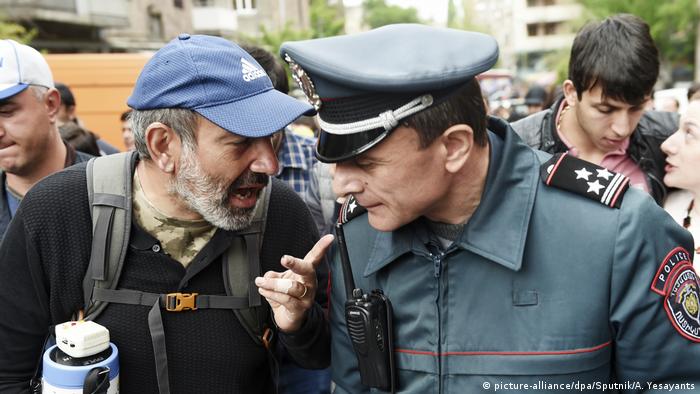 A lawmaker and former journalist, Nikol Pashinian (left) has been leading the protests

Prisoners 'must be released'

The EU's foreign service urged authorities to exercise restraint against protesters and figure out a peaceful way forward, saying it is "of utmost importance."

"All those who have been detained while exercising their fundamental right of assembly in accordance with the law must be released immediately," the EU's External Action Service said in a statement.

Deepening crisis: The clash between the premier and opposition leader will likely deepen a political crisis that has gripped Armenia since a controversial referendum in 2015 that shifted the political system to a parliamentary republic. Opposition protesters had hoped the meeting would have contributed to a political solution to the impasse.

Why are protesting? Critics of Sargsyan are upset that he was elected prime minister, despite already serving 10 years as president for two terms. Before taking on the premiership, Sargsyan worked to hobble the position of president into a largely ceremonial role, transferring all its important political functions to the prime minister.

Widespread protests: Crowds of up to 50,000 people have spent the past 10 days protesting in the cities of Yerevan, Gyumri, Ararat and Artashat. Police have detained hundreds of protesters for violating public order.

The election results: Sargsyan was sworn-in by lawmakers on Tuesday under a new parliamentary system after leading the landlocked South Caucasus nation of 2.9 million people for a decade.