Ariel Sharon: Hardliner and realist | World| Breaking news and perspectives from around the globe | DW | 11.01.2014

There have been few more divisive figures in the Mideast than Ariel Sharon. As a general, and later a politician, the former prime minister, who died after eight years in a coma, shaped Israel's history for decades. 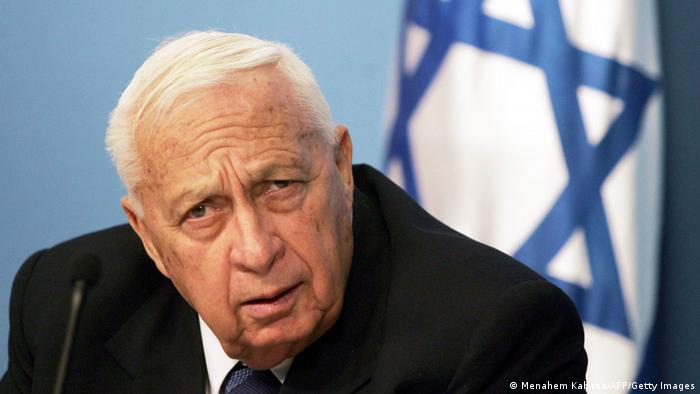 Ariel Sharon, or Arik, as he was known, who died Saturday (11.01.2014) aged 85 in a hospital near Tel Aviv, was often described as a hawk, or a hardliner. The English title of his autobiography proclaimed him a "warrior." Attitudes about him in the Middle East ranged from respectful and admiring to hostile and full of hatred. For many Israelis he was the hero of the Yom Kippur War in 1973, while for many Palestinians he was the "butcher of Sabra and Shatila."

Sharon was born Ariel Scheinermann in Tel Aviv in 1928. His parents were eastern European Jews who adopted the name of the Plain of Sharon, where they settled. Sharon's life was closely tied to the military history of the new state of Israel. In the 1948 War of Independence, often called the First Arab-Israeli War, he fought as a platoon commander. In 1953, he formed a unit that specialized in reprisals following attacks by Palestinian fighters, and two decades later, in the Yom Kippur War, his daring - and apparently unauthorized - crossing of the Suez Canal with a tank unit helped to secure victory over Egypt. During his military career, Sharon was considered one of Israel's greatest field commanders.

From officer to politician

As is the case with many leading Israeli politicians, Sharon's military experience became the springboard for a political career. He was elected to parliament for the conservative Likud party, and served both as agriculture and defense minister.

It was during this period that the invasion of Lebanon began. The purpose of the campaign was to expel the Palestinian Liberation Organization (PLO) from Israel's northern neighbor. But after the withdrawal of the PLO, a Christian militia allied with Israel attacked refugee camps at Sabra and Shatila in Beirut, killing hundreds of Palestinians. The massacres, which took place in Israeli-controlled territory, led to an international outcry.

An Israeli committee charged with investigating the massacres determined that Sharon also bore the responsibility, and he stepped down as defense minister in 1983, but remained in cabinet as minister without a brief. An investigation into Sharon's liability for the bloodbath was also initiated in Belgium, whose judicial system included the principle of universal jurisdiction, but this proved inconclusive.

None of this harmed Sharon's long-term career. In the years that followed he held the posts of foreign, trade, and construction ministers, before finally being elected prime minister in 2001. Following a power struggle within Likud, he announced his resignation at the end of 2005 and left to form the new centrist Kadima party.

Sharon always adopted an uncompromising, hard-line position towards the Palestinians, consistently stating that security for Israel was his highest priority. He was critical of the proposal for a independent Palestinian state and distanced himself from negotiations over Palestinian autonomy. Following a series of Palestinian suicide attacks against Israel, Sharon was quick to hold Yasser Arafat personally responsible, and defied international condemnation by putting the Palestinian leader under house arrest in his official residence in Ramallah.

Sharon did not shy away from other provocations, such as moving into an apartment right in the heart of the Arab quarter of Jerusalem's old town, and in September 2000 he incurred further uproar with a demonstrative visit to the Temple Mount, one of Islam's holiest sites. The resulting street fights developed into the second Palestinian intifada - which lasted four and a half years.

During his tenure, Sharon also withdrew a little from his uncompromising attitude. The aging hawk eventually ordered the Israeli military to withdraw from the Gaza Strip and clear the Jewish settlements there. In his autobiography, he wrote that Jews and Arabs could live together. But according to Avi Primor, Israel's former ambassador to Germany, the former prime minister always remained true to his basic convictions. "Ariel Sharon changed neither his ideology, his politics, and certainly not his instincts," he wrote in the German political journal Cicero. Instead, Primor argued, he was a realist merely accepting the changing circumstances.

On January 4, 2006, Sharon suffered a stroke and fell into a coma, leaving his deputy Ehud Olmert to take over as prime minister. He was later declared to be in a permanent vegetative state. On Wednesday, doctors said the 85-year-old's health had sharply deteriorated, and that he was suffering serious kidney problems.

In Jerusalem, protests and celebrations of Palestinian prisoner release

As Palestinians celebrate the release of family members, Israelis protest what they see as a bitter deal. Neither side is happy with international peace efforts. (31.12.2013)