Chinese investors want to buy large plots of land in Argentina to use for soy bean plantations. In Patagonia, a local uprising against landgrabbing is beginning to take shape. 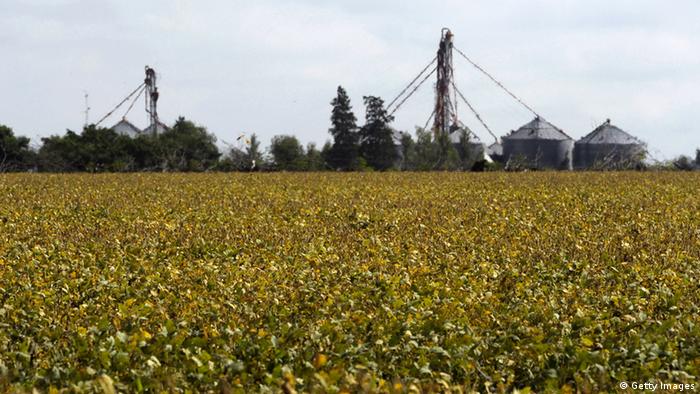 The city of Viedma is situated off the Atlantic coast in south-central Argentina, on the banks of the wide River Negro. This is where Patagonia begins.

In the late 1980s, Viedma was at the center of international media attention: The Argentine government had decided to move from Buenos Aires to the small town as a means to develop the country's deserted south. The plan never took off, however. Ultimately, President Raul Alfonsin's government lacked the funds for new ministries and a costly move. Viedma was crestfallen, and most of the people who had moved to the town in hopes of a new job left again.

Two years ago, Miguel Saiz, the governor of Rio Negro Province, returned from a visit to Asia, and rumors began to spread that Chinese investors wanted to lease 320,000 hectares of land for 50 years and build docks in the nearby deepwater port of San Antonio to ship soybeans to China. Local businessmen were ecstatic, but the population was appalled.

A dozen activists from the Food Sovereignty group have gathered at a bar on the banks of the Rio Negro. Theirs is a long battle against growing grain for biofuel that pushes food prices to astronomic levels. 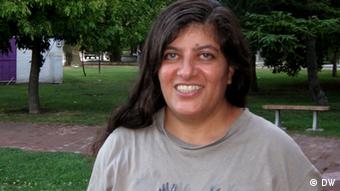 Vega is fighting against using her home for biofuel production

Fabiana Vega, who coordinates the protests against the governor's plans, says her group was especially angered by the governor's information policy. He only conceded information bit by bit, the 42-year old who works within the justice system told DW.

At first, he said a state-run Chinese company wanted to plant soy to fight hunger in the world - a noble aim meant to keep the activists at bay, Vega says. "Who can argue against fighting world hunger?" Next, the governor said the Chinese would process the soybeans for hog swill. In the end, he admitted to a biofuel project. 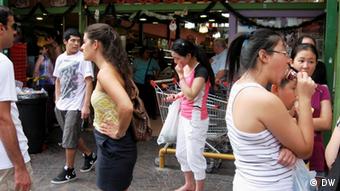 Locals are concerned about foreign involvement

The foreign ownership of property caused ill feelings among the local population as land prices rose and ordinary farmers found they could barely afford them anymore. In an effort to calm the atmosphere, the government passed a law limiting foreigners' land purchase rights - initially in Rio Negro Province. In December 2011, the law became effective in all of Argentina.

Laws alone are not the solution, however, says Gabriel Pecollo, a Viedma journalist. "Many rich folks from the north have a residence permit, and the Chinese don't want to buy land, they want to lease it," he argues.

An eye on the money

Argentine author Miguel Bonasso travelled to the Rio Negro region last year on a reading tour from his latest book, El Mal (The Evil). He blames the government for the exploitation of the country's soil, crude oil and minerals.
In the 1970s, Bonasso was a member of the Montoneros leftwing urban guerrilla group. He was persecuted and finally went into exile. Many of Bonasso's friends were murdered.
In 2003, President Nestor Kirchner nominated him as head of the parliamentary commission for natural resources - a position he held for eight years before resigning. Today, he is one of the most prominent opponents of Argentina's policies regarding its natural resources. Bonasso characterizes the new land purchase law as devious, adding that the legislation is not retroactive and thus does not apply to Turner or Benetton. "People like that already own 10 percent of our territory. Now they are allowed another five percent. That makes a total of 15 percent," Bonasso says.

Today, genetically modified soybeans grow on 22 million hectares of Argentina's farmland. Pesticides and fertilizers pollute the groundwater and leach the soil. Planes spray entire regions, with little consideration for villages and people living in the countryside.

Fabiana Vega's Food Sovereignty group was afraid the people of Rio Negro Province faced the same fate - and filed numerous lawsuits. An opposition parliamentarian also brought the project to the provinces highest court - with success. In November 2011, the court ruled the plan had not been sufficiently analyzed with respect to its environmental sustainability.

Two months earlier, the governor of Rio Negro Province lost a re-election bid. Now, Peronists rule the province as well as the country.

Fabiana Vega does not believe the Chinese soybean project has been laid to rest once and for all: The Chinese can wait, she says, while the Peronists rarely thwart investors' plans as long as the money is right.

After three years of discussions, the UN has agreed a document meant to protect local populations against land grabbing. It should help ensure the right to food. (12.05.2012)

After an outcry from developing countries, a UN meeting in Rome on global food security has adopted draft guidelines to protect communal land users, from wealthy, exploitative land grabbers. (12.03.2012)

Uganda is one of several African countries where the government has used its power to allocate land to investors, effectively shutting out local communities. (17.02.2012)