President Alberto Fernandez had been visiting a region in Patagonia devastated by forest fires when a mob protesting mining projects surrounded his entourage. 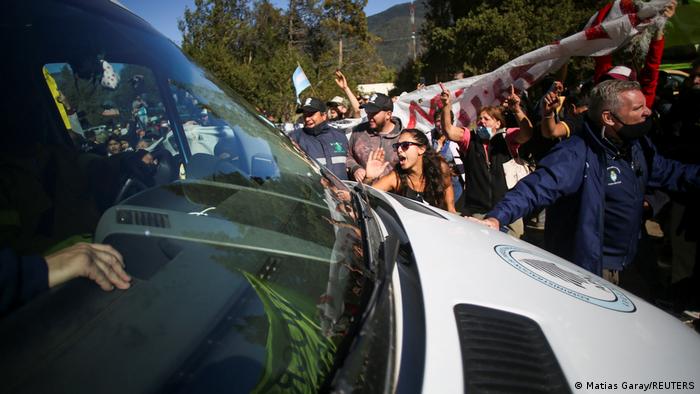 A crowd of demonstrators accosted Argentinian President Alberto Fernandez Saturday as he left a community center in the town of Lago Puelo in southern Patagonia, local media reported.

The demonstrators were able to surround the president's bus, with television footage showing some people throwing themselves on the hood, kicking the sides and pelting the vehicle with rocks that broke windows.

The bus and other vehicles in Fernandez's entourage managed to snake through the crowd and escape the mob. There were no injuries reported.

The president later finished his tour of the region by helicopter before returning to the capital, Buenos Aires, local newspaper Clarin reported.

Why were people at angry at Fernandez?

According to Clarin, the demonstrators vented their frustration about mining projects in Chubut province being pushed forward by the local governor Mariano Arcioni, which Fernandez supports.

The region at the foot of the Andes has large deposits of gold, silver and uranium, but the mining projects are opposed by indigenous communities and environmentalists, according to the NGO London Mining Network.

After the incident, Fernandez said on Twitter he is "sure that this violence is not shared by the Chubut people and by those who inhabit our beloved Argentina."

Fernandez was visiting the region to inspect the damage from massive forest fires that have destroyed 7,000 hectares of land, 200 homes, and left at least one person dead, according to Environment Minister Juan Cabandie.

The fires have been raging for days in the Chubut region.

It is unclear what sparked the fires, although Cabandie said they started simultaneously in several different places, which has led investigators to suspect arson.