Argentina in default for second time this century

Argentina has defaulted on its debts for the second time since 2000. But the government believes it can renegotiate its loans before the fallout hits the economy. 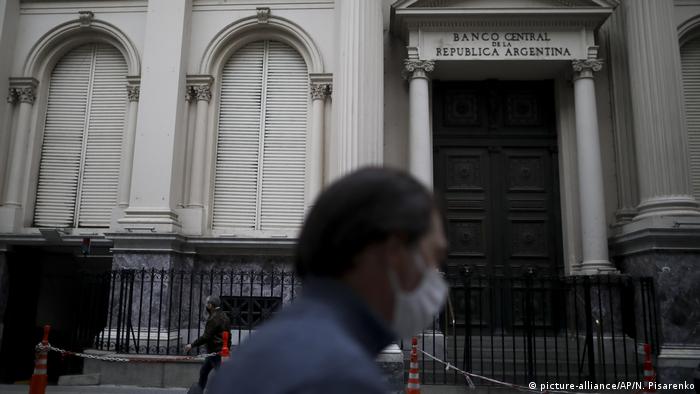 Argentina on Friday failed to pay around $500 million (€459 million) in interest on its already delayed bond debt, the second time the Latin American country has defaulted on its loans since 2000. However, it continues to negotiate to restructure its loans with its creditors, an official government source said.

"We're not paying but the negotiations are continuing," the source said.

Argentina had been widely expected to default on its loans. On Thursday, the economy ministry had announced it was postponing talks with international creditors for a second time, this time until June 2. The purpose of the talks had been to discuss restructuring $66 billion of the country's debt.

This is the ninth time in its history that Argentina has defaulted on its debts, after the most recent episode in 2001, when it owed $100 billion. A deep social and economic crisis followed.

The government of President Alberto Fernandez remains optimistic that an agreement will be reached before Argentina feels the effects of the default.

Economy Minister Martin Guzman said talks were on a positive course despite an "important distance" to cover before a deal is reached.

Argentina's economy has been in a recession for two years. The country currently owes $324 billion, or 90% of its GDP. It had been in the process of renegotiating its crippling debt when the coronavirus pandemic hit, slamming the country's economy even further.

The country's main creditors have demanded "a direct and immediate discussion" on the restructuring plan.

"The group is happy to see that Argentina has expressed its intention to work with the creditors, but actions speak louder than words," said the creditor group Ad Hoc Bondholder Group, made up of investment funds including BlackRock and Fidelity. "Over the last month, Argentina has communicated virtually nothing of substance to its creditors."

Argentina had previously asked bondholders for a three-year grace period on debt repayment, a 62% reduction on interest totaling $37.9 billion, as well as 5.4% on capital totaling $3.6 billion.

This plan was rejected, and the Argentinian government is currently reviewing a counteroffer. If a new plan is not agreed upon by the end of June — when more bond payments are due — bondholders might choose to settle the matter in court.

Argentina's government is trying to negotiate a restructuring of debt with creditors as the country's finances dwindle. Officials have presented creditors with a vastly grimmer economic prognosis than they did in April. (07.05.2020)

Argentina has imposed currency controls and seeks more time to repay its massive debt as part of efforts to stem fresh turmoil in financial markets. DW explains why the specter of another default looms ever larger. (02.09.2019)

Lebanon to default on debt amid financial unrest

The crisis-hit country won't pay a $1.2 billion Eurobond which is due next month. Prime Minister Hassan Diab says the national debt level, at 170% of GDP, is higher than his country can bear. (07.03.2020)