Former Argentine President Cristina Fernandez is facing new corruption charges, with a judge asking for her arrest. She is alleged to have headed an illegal group that collected bribes in exchange for public contracts. 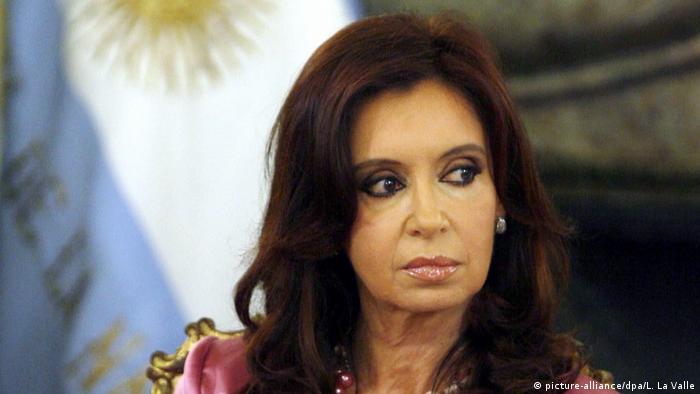 Argentina's former President Cristina Fernandez has been indicted on corruption charges and a federal judge has requested that her immunity be lifted.

On Monday, Judge Claudio Bonadio accused Fernandez of "being the boss of an illegal association" and running a corruption network between 2003 and 2015. The period covers her two terms as president as well as that of her late husband and predecessor, Nestor Kirchner.

Fernandez is a senator and has immunity from arrest but not prosecution. It is unlikely Congress would lift her immunity.

The corruption scandal emerged in August when the newspaper La Nacion published detailed notebooks from the chauffeur of Fernandez's former planning minister detailing a multimillion dollar kickback scheme between officials and businesses for public works contracts.

'Collusion of officials and businessmen'

In his indictment on Monday, Bonadio wrote that there "was a collusion of officials and businessmen who made this scheme work, which took out with rigged proceedings money from the national state to the detriment of education, health, pensioners, which left the people poorer without sewage, services, safe transportation."

In order to win public works contracts, businesses "needed to deliver a percentage of the total amount paid by the state to civil servants designated by Nestor Kirchner and Cristina Kirchner," he added.

Fernandez also faces trial in a number of other corruption cases.

She has denied the allegations and accused Bonadio of working with conservative President Mauricio Macri to undermine her and distract from the ailing economy.

Fernandez remains popular and is expected to run for president in the 2019 election.

Former leader Cristina Fernandez is implicated in a huge corruption scheme that allegedly occurred during her presidency. Police have arrested 16 people, including former lawmakers and heads of construction companies. (24.08.2018)

Buenos Aires' security chief said the man attempted to bribe officers who performed the arrest. But the top official in ex-President Cristina Fernandez's government told nuns he wanted to "donate" the cash. (15.06.2016)