While terrorists continue their attacks in various European cities, ordinary people appear less and less fazed by the terror threat. Societies now have the chance to build up resilience to danger, experts told DW. 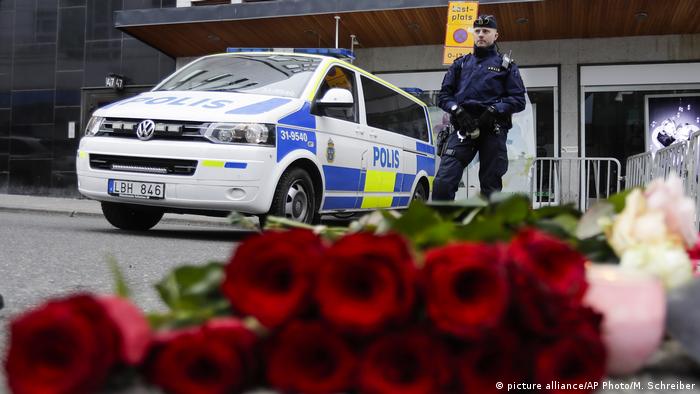 While some Germans fear more violence, the Berlin attack has prompted others to show they won't be intimidated. This attitude helps to build resilience in society, says renowned sociologist Frank Furedi.

Delegates at a barricaded congress in Cologne of Germany's right-wing populist AfD party have rejected a motion from leader Frauke Petry. Outside the venue are thousands of anti-AfD protestors and large police squads. (22.04.2017)

Russia's domestic security service says it has detained a suspect linked with last month's deadly bombing of the St Petersburg metro. The man, said to be from Central Asia, reportedly trained the suicide bomber. (17.04.2017)

The Tashkent government says it passed on information that linked Rakhmat Akilov to the "Islamic State" (IS) armed group. The 39-year-old is in custody on suspicion of mowing down a crowd in a Stockholm street.

The terror strikes in London, Stockholm, Dortmund, and Paris in recent months were relatively low on casualties compared to similar attacks in 2015 and 2016. Even after the more deadly tragedy in Manchester, everyday life seemed to resume pretty quickly. Are Europeans truly learning to keep their cool in the face of terror?

"Human beings are pretty good at habituating to anything," Dr. Anne Speckhard, Director of the International Center for the Study of Violent Extremism, told DW.

"People are getting used to monthly attacks in random cities around the world and just thank their stars that it wasn't them that was randomly targeted," she added. "Terrorists who run successful terror campaigns need to give the feeling that anyone, anywhere, at any time can be attacked. These attacks have been too sporadic, with too much time in between to create that sense and spread terror."

Instead, living through a terror strike can give people valuable experience to make them more resilient,more capable of "bouncing back" after a crisis, says Dr. Doron Pely from the University of Southern California.

"The Europeans are beginning to accumulate an unfortunate, but reasonably useful memory of dealing with situations like this," he told DW. "They know that life continues after the trauma, they have an experience of bouncing back. They actually see the Champs Elysees going back to what it was, they see people riding trains very soon after a terror attack, they see open air markets going back to operation, and that is a memory that is extremely valuable for a community."

This mechanism seems to also work at a local level - while the recent attack in St Petersburg came as a shock to Russia's second city, Muscovites have grown increasingly calloused after a number of terror strikes targeting the capital.

While witnessing a successful recovery after a terror attack is helpful, there is no way to develop complete resilience to such events. Individuals can also respond instinctively to trauma and fall back to their basic reactions such as fight, flight or freeze, Pely told DW. This same principle can be applied to whole societies and exploited by extremists for their own ends, adds Pely, who serves as a conflict management director at risk management firm TAL Global.

"Basically, the game is between fear and resilience," he told DW. "Terrorists would like us to react out of fear because it serves their purposes, people, of course, would much rather respond with resilience."

The challenge is to find leaders willing to commit resources to preparing people for an emergency, according to the expert.

"Leadership is something we are sorely missing. We have politicians, but it's not entirely clear that we have leaders," he said. "If you are a leader, you need to understand that the march to resilience is a long-term march, and you would need to work and deal with blowback from other political corners."

Terrorists and right-wingers locked in a loop

Unfortunately, the series of terror attacks across Europe has boosted support for far-right groups and political parties, which call for tough immigration laws and stricter security measures. According to Speckhard, every terror attack by the so- called "Islamic State" (IS) and other groups "plays right into the hands of the far right."

"This latest event in France may affect elections," she told DW.

"I think if the terrorists ramped it up we'd see more fear spreading, let's hope that doesn't happen," she said. The messages projected by the far-right parties "just inflame the situation and make it easier for groups like [the Islamic State] to recruit."

'You cannot stop us' from living our lives

Faced with terror threats and increased immigration, voters across the West are experiencing "democracy fatigue," Pely says. The tendency is to search for simple answers, and populists can easily exploit this situation as Europe heads for a series of key elections.

"Ultimately, it is the responsibility of mature political leadership to create a counterbalance, a response for this," he said. "They will have to take a pragmatic and a serious route, and dealing with it through a populist set of messages is not going to work."

Boosting resilience should include training and preparing people for a crisis and discussing risks and vulnerabilities, Pely says.  While politicians prefer staying away from these topics, such steps send an "essential" message to the voters and potential attackers, he told DW.

The message is that "we may suffer, but it would be a temporary setback. We will bounce back, continue our lives, and you cannot stop us."