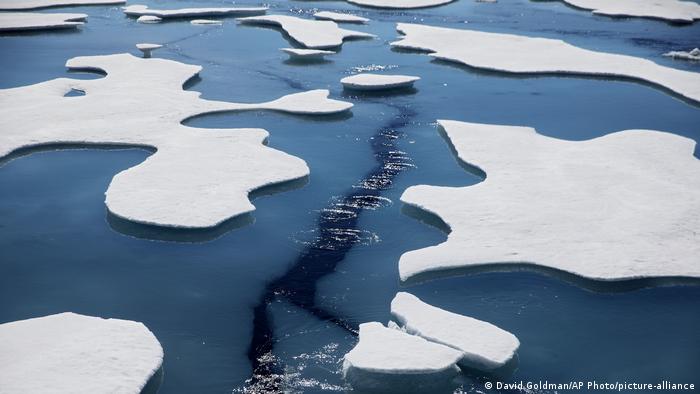 The ice extent is the second-lowest measured via satellite since records began in 1979.

The melt illustrated that "we are headed towards a seasonally ice-free Arctic Ocean," said Mark Serreze of the Colorado-based National Snow & Ice Center (NSIDC).

Serreze said a Siberian heat wave last spring and a natural Arctic climate phenomenon were at play as well as the warming from the burning of coal, oil and natural gas.

"This year is another nail in the coffin," said Serreze. "It's been a crazy year up north."

Last April, Hamburg university scientists calculated that by 2050 the North Pole would be ice-free in some Arctic summers.

Last month, large openings melted in the sea ice above Greenland enabled the ice breaker to reach the geographic North Pole, previously too difficult for shipping.

"At times we had open water as far as the eye could see," expedition leader Markus Rex said, referring to the area usually covered in thick sea ice.

"I'd never experienced that before so far north," added Polarstern captain Thomas Wunderlich.

The project called Mosaic involved scientists from 17 nations, including Russia, France, the USA and China. It delivered findings to 80 research institutes.

The Polarstern is due in its Alfred-Wegener-Institute home port, Bremerhaven, on October 12.

Serious consequences around the North Pole

In a study published last month, the institute said Greenland had lost a record 532 billion metric tons of ice during the Arctic summer of 2019.

Melted, that equated to California being 1.25 meters (four feet) deep in water.

"Not only is the Greenland ice sheet melting, but it's melting at a faster and faster pace, said Ingo Sasgen, lead author and Alfred-Wegner-Institute geoscientist.

In late July, according to the Canadian Ice Service, the Milne Ice Shelf at the fringe of Ellesmere Island in Canada's remote Nunavut territory had collapsed.

The Milne shelf had "disintegrated, basically," said Copland, highlighting that the 2020 Canadian Arctic summer was 5 degrees Celsius above the 30-year average.

The German Alfred Wegener Institute's Polarstern ship is set to return to the port on Monday, bringing home devastating proof of a "dying Arctic Ocean" and warnings of ice-free summers in just decades.