Francis Kéré, a renowned architect from Burkina Faso, is to repurpose a disused airplane hangar at Berlin's former Tempelhof airport. Meanwhile, his works - including his famous opera village - are on show in Munich.

Architect Francis Kéré comes from Burkina Faso, but has made his home in Berlin since 2005. Now he has plans to transform an old airplane hangar at the Tempelhof airport ramp in Berlin - which stopped being used as an airport in 2008 - into a "temporary mobile theater."

It was the future director of Berlin's Volksbühne theater, Chris Dercon, who commissioned Kéré. Dercon, former head of London's Tate Modern and Munich's Haus der Kunst museum, is set to replace Frank Castorf, the iconic theater's head for the past 25 years, in 2017. The Belgian theater director's appointment to the position was met with skepticism over his qualifications: Dercon's background is in art rather than theater. 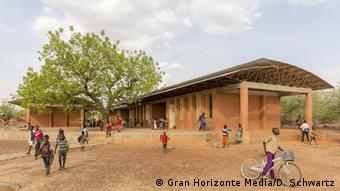 Kéré's project is indeed a mix of theater and architecture. He is planning a construction with a round, amphitheater-like stage with space for up to 1,000 people. While the stage will be positioned in the hangar, it will also be mobile so - like the airplanes at one time - it can be taken outside.

"The warning is there - Berlin doesn't work," said Kéré in reference to the never-ending construction of Berlin's newest BER airport. "But it will work with me," he promised.

In his home country of Burkina Faso, the architect has built schools. He is also known for his collaboration with the late German theater director Christoph Schlingensief on his so-called opera village.

Kéré's works are part of an exhibition starting Thursday at the Architecture Museum of Munich's Technical University, housed in the Pinakothek der Moderne. Titled "Radically Simple," the show runs through February 26, 2017.

The museum presents Kéré as an "extraordinary talent" who manages to combine his cultural roots with the training he received in Berlin.

Photographer and videographer Daniel Schartz has contributed impressive photos and videos of yet unpublished works to the exhibition, which offers a unique encounter with the oeuvre of Francis Kéré.

After what seemed like an endless stream of delays, budget transgressions and lawsuits, Hamburg's much-awaited Elbphilharmonie concert hall's plaza opens Saturday. The hall itself won't open until January 11, 2017. (04.11.2016)

Sustainability and quality of life are essential features of modern architecture. The International Highrise Award honors an innovative skyscraper that combines these aspects in an exemplary way. (03.11.2016)

Berlin boasts more than a dozen architectural and art works by Bauhaus founder Walter Gropius. They're now set to become more accessible to visitors with a new free app. (26.09.2016)