Celebrated late artistic duo Christo and Jeanne-Claude had first planned to wrap the Parisian landmark 60 years ago. Now, the project has finally been realized. 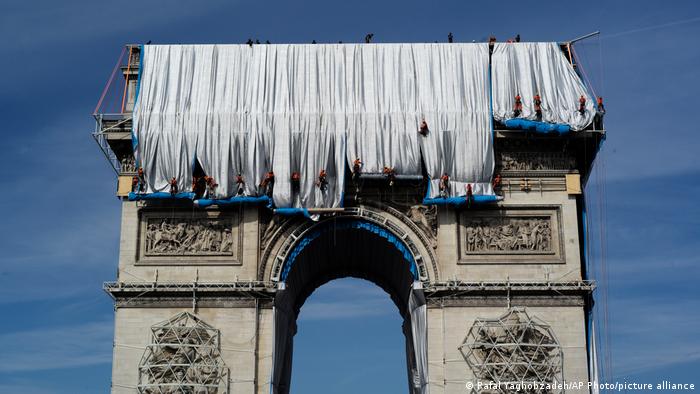 It's a wrap: The 'L'Arc de Triomphe, Wrapped' project by late artist Christo and Jeanne-Claude was realized posthumously

Early in the morning in Paris, there are few tourists on the Champs Elysees and almost no cars on the streets.

But at the Arc de Triomphe, dozens of journalists are milling about, some filming the numerous climbers who first peer down from the platform atop the landmark before slowly descending as they lower nearly 25,000 square meters (about 30,000 square yards) of silver-blue fabric down the sides of the monument.

The "L'Arc de Triomphe, Wrapped" project officially opens on September 18, and the Parisian monument will remain shrouded for about two weeks. Although the deceased artist who inspired this project, Christo Vladimirov Javacheff — or Christo for short — insisted that his works of art had no particular message, some passersby wonder if this latest project might just have a hidden meaning. 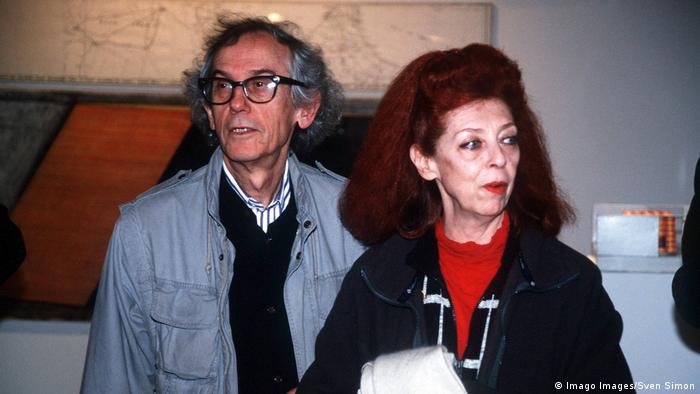 'The most impressive person I ever met'

Among the crowd in the square on that particular morning is Vladimir Yavachev, Christos' nephew who has overseen the Paris project since his uncle died in May 2020 at the age of 84.

He appears to be constantly in motion — running to the foot of the Arc de Triomphe to give instructions to the workers, then allowing passersby to take a photo with him, or making brief comments to journalists.

"How do I feel? I just miss him a lot — he was the most impressive person I ever met," he tells DW of his uncle. "I miss Christo's energy, his enthusiasm, his criticism, his curiosity."

Yavachev began working as his uncle's assistant in 1990 when he was only 17 years old.

"My uncle and his wife Jeanne-Claude had the idea for the Paris monument back in 1961, when he lived near the landmark," he explains, adding that they even created a photomontage of the project.

But it took more than half a century before it was realized. "They didn't take any concrete steps to make it happen, such as obtaining permits to implement the plan, until 2017 — that's why we're only carrying out the project now," Yavachev says.

The wrapping was supposed to be completed in the spring of 2020, but the team initially postponed the project, first because kestrels moved to the Arc to nest after the fire at Notre-Dame de Paris Cathedral in April 2019. Then came the COVID-19 pandemic.

In honor of his uncle and Jeanne-Claude, who passed away in 2009, Yavachev promised to complete the wrapping of the Arc de Triomphe — it was, after all, Christo's wish.

"That's quite a responsibility, of course, to oversee such a project. You either have to get used to the stress or have a heart attack," says Yavachev with a grin.

At €14 million ($16.5 million), the cost of the installation comes from the late artist's own funds, as well as the sale of sketches, photomontages and miniature versions of the artwork.

More than a thousand people have been employed on the project. Among them is 34-year-old Anne Burghartz from the Stuttgart-based structural engineering firm, Schlaich Bergermann Partner.

For the past two-and-a-half years, she and her colleagues have developed a cage structure based on Christos' drawings, which the artist worked on until the end of his life.

The structure protects the frescoes and reliefs on the monument as the fabric is then pulled over it. A total of 200 holes were drilled to install the structure, which will be resealed when the installation is demounted. The polypropylene fabric is recyclable.

At this point, Burghartz is making sure that everything goes smoothly. "I got less and less sleep over the past weeks, because there was a lot to prepare up to the last minute," she says. "But I'm glad that everything worked out. Today, I just get to watch as a tourist." 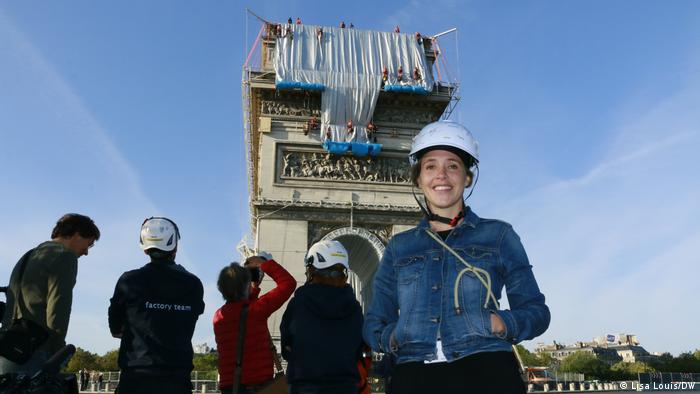 A few meters away from Burghartz, 73-year-old Wolfgang Volz takes photos of the works on the installation. He has been documenting Christo and Jeanne-Claude's artworks for 50 years.

"I am the custodian of their art and keep the photos well organized for future generations," he says. That's not easy at the moment.

"It's a catastrophe, of course, that they're no longer here. But we're trying to make the best of it." Volz added that "they invite the public to engage with art — even if their art had no message except that it's just art, good art."

Art without a message?

Stephane Lembert believes the wrapped monument does have a message. He, too, is taking a photo of the monument — but with his cell phone.

"I read about the project and came by specially," says the 58-year-old cab driver and contemporary art fan. "It's impressive to see this — just as impressive as Christo's covering of the Pont Neuf bridge in Paris in 1985.

"The artist manages to create a link between the past and present through his installations. It's as if he's telling us to continue to keep the past alive."

For Yavachev's nephew, the artworks of his Bulgarian-born uncle are above all an expression of the latter's search for freedom.

"He came from a communist country and fled from there as an illegal immigrant," he explains of Christo's flight to Austria in 1957.

Yavachev wants to keep this legacy alive, and hopes the wrapping of the Arc de Triomphe is not the last project he undertakes on behalf of Christo and Jeanne-Claude.

"The two of them also had plans to create the Mastaba, the largest sculpture in the world, in the United Arab Emirates near the capital Abu Dhabi. One day, we may carry that out as well — five years from now, or maybe in 20."

The artist was renowned for his wrapped large-scale art. Delayed due to COVID-19, the date for the posthumous realization of his project has been confirmed.