Part of Hamburg's Triennial of Photography, "Anton Corbijn: The Living and the Dead" showcases the Dutch photographer's timeless portraits of music idols — often deceased — from the last 40 years.

When does photography become art? This question lies at the heart of the exhibition, "Anton Corbijn: The Living and the Dead," a retrospective of a photographer who has skirted the line between art and commercialism throughout his storied career.

Born in 1955 in the Netherlands, the enigmatic Corbijn has made his name not only as a photographer, but as a music video and film director, having produced video clips for the likes of Depeche Mode, U2 and Nirvana in the 1990s before directing the renowned Ian Curtis biopic, Control, in 2007, and the George Clooney spy thriller The American in 2010.

But throughout his career, Corbijn has primarily remained a photographer who has instilled his commercial commissions with an original and deeply artistic eye.

"Photography was the only thing that mattered in my life and I gave it everything," he once said.

Read more: So many dead musicians? Rolling Stone editor-in-chief says it's 'quite natural'

The show at Hamburg's Bucerius Kunst Forum, part of the city's seventh Triennial of Photography, juxtaposes the dual tracks of a near 40-year photography career.

Corbijn's artistic and experimental side comes out in the "a. somebody" series from 2002. Here, Corbijn photographs himself in a grainy, family portrait style while posing as dead rock stars like John Lennon, Jimi Hendrix, Elvis Presley, Janis Joplin, Sid Vicious or Kurt Cobain in locations around his hometown — some of whom, like Cobain, he photographed before their untimely death.

"You see in the pictures not only me, but always sky," he told the Hamburger Abendblatt of the self-portraits. "The sky above has always played a big role for me, and you can see in the photos the desperation with which I try to portray someone, to be somebody under this sky. I always used to think that I was nobody. I later recognized myself."

Both these more personal works inform the artist's ongoing effort to play on the symbolism of the living and the dead — and to dwell on those rock music immortals who live on after death. 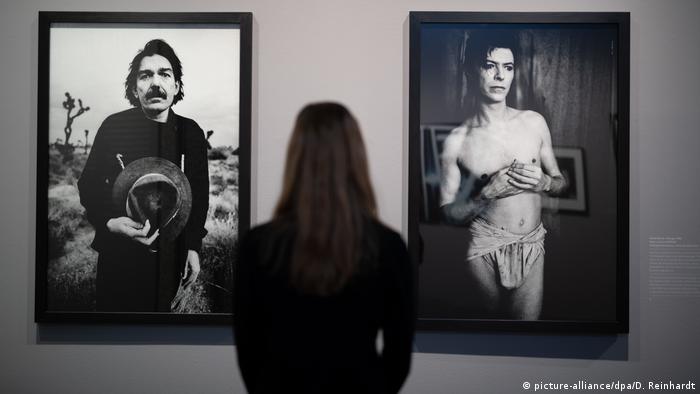 But among the 119 analogue works on show, the second part of the exhibition — which includes previously unpublished photos — comprises 77 of Corbijn's most iconic portraits of bands and musicians like Joy Division, Depeche Mode, Tom Waits, U2, PJ Harvey, Nick Cave and the Rolling Stones.

Many of the mostly black-and-white photographs were artworks that employ Corbijn's groundbreaking style: framed subjects in natural, unglamorous poses shot in black-and-white, an approach that was then very uncommon in the glitzy genre.

Corbijn fought early on for the creative freedom to realize his own vision when photographing such famous musicians. The result is a unique and often unexpected perspective on some of the world's most oft-photographed faces.

His creative impulse continues to this day. As he told the Hamburger Abendblatt on the eve of his latest retrospective, "I want my life to remain an adventure."

"Anton Corbijn: The Living and the Dead" runs June 7 through January 6, 2019 at Hamburg's Bucerius Kunst Forum and is part of the city's seventh Triennial of Photography.

As the second anniversary of David Bowie's death nears, Berlin commemorates the British musician with tours, parties and a TV documentary. Bowie lived in West Berlin in the late 1970s, in what was still a divided city. (05.01.2018)

Capturing the icons of music: Anton Corbijn retrospective in Berlin

From U2 to Metallica, The Rolling Stones to Johnny Cash, Dutch photographer and filmmaker Anton Corbijn has immortalized the world's top musicians. The Berlin gallery C/O presents a retrospective of his work. (06.11.2015)