Jewish groups in Britain are expressing their anger over alleged anti-Semitism in Jeremy Corbyn's Labour Party. They say Corbyn is "fixed within a far-left worldview" that is "hostile to mainstream Jewish communities." 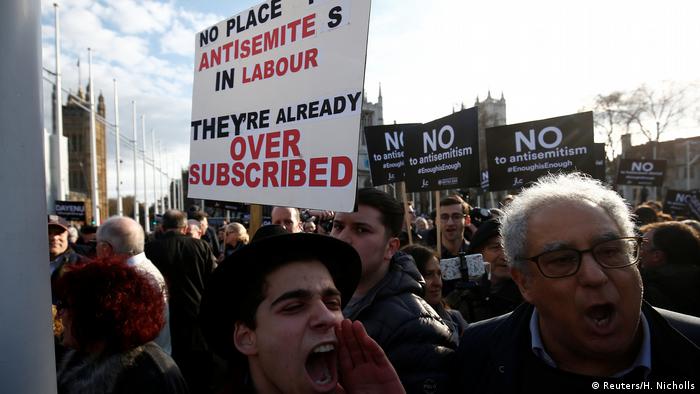 British Jewish groups protested outside parliament on Monday to demonstrate against opposition Labour Party leader Jeremy Corbyn, whom they say has failed to crack down on anti-Semitism in party ranks.

Before he unexpectedly became party leader in 2015, Corbyn had spent decades on the left-wing fringes, but now Jewish groups say he is ignoring the anti-Semitic views of both Labour party members and groups he supports.

Read more: What Brexit means for Jews and Israelis in the UK

A fresh wave of anger ensued last week after it was revealed that in 2012 Corbyn questioned a decision by London local authorities to remove a street mural depicting men in suits with large noses playing Monopoly on the backs of naked people.

"He is repeatedly found alongside people with blatantly anti-Semitic views, but claims never to hear or read them. Again and again, Jeremy Corbyn has sided with anti-Semites rather than Jews," the Board of Deputies of British Jews and the Jewish Leadership Council said in an open letter published late on Sunday.

"We conclude that he cannot seriously contemplate anti-Semitism, because he is so ideologically fixed within a far-left worldview that is instinctively hostile to mainstream Jewish communities," they said. 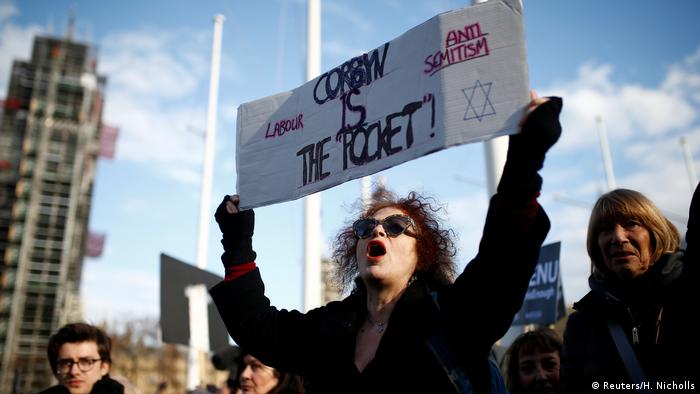 In a statement, Corbyn said he recognized anti-Semitism had occurred "in pockets within the Labour Party" and apologized for the hurt this had caused. He also condemned anti-Semitism and promised to stamp it out of Labour politics.

Corbyn said on Friday that while he had spoken out in 2012 against the removal of public art on grounds of freedom of speech, he regretted not looking more closely at the mural, which he has now said was "deeply disturbing and anti-Semitic."

A number of Labour's members of parliament were expected to join the protest on Monday, revealing an internal rift within Labour that had been somewhat hidden after Corbyn led the party to a stronger-than-expected showing in a general election last June.

The mural controversy did not seem to affect Corbyn's support among dedicated grassroots followers who believe it was only the most recent smear attempt from establishment figures.

Some supporters posted supportive messages on Twitter under the hashtag #PredictTheNextCorbynSmear.