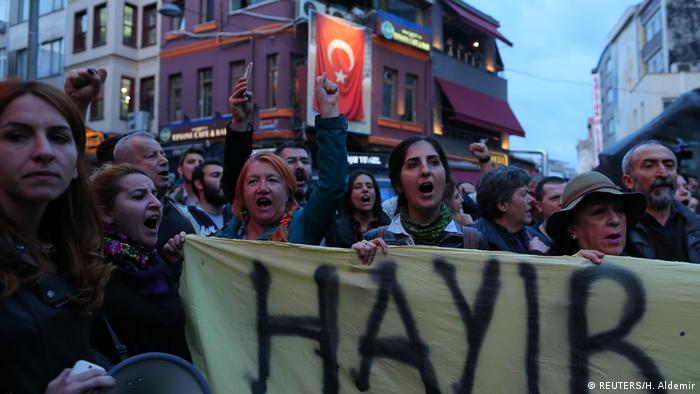 Protesters accused the Election Commission of partisanship over its decision to reject all opposition requests to annul Sunday's referendum result. By garnering the slimmest of majorities, with just over 51 percent of the vote, Erdogan has succeeded in consolidating his rule and granting sweeping powers to the presidency.

Read more: 'Worse than the referendum itself' is Turkey's tragic polarization

However, in Turkey's three largest cities - Istanbul, Ankara and Izmir - a majority voted "no." Although he basked in his referendum win, it's clear Erdogan would have preferred to consolidate his power with greater public support.

Opponents of the reforms claim there were irregularities and possible fraud on election day, pointing in particular to the Election Commission's decision allowing unsealed ballots to be counted.

"If the referendum hadn't been manipulated, the 'no' camp would have won," Cansu, a 23-year-old protester at Besiktas, told DW.

However, regardless of Sunday's referendum result, many young voters had already lost faith in the opposition posing a significant challenge to Erdogan's grip on power.

"The opposition is just too weak," said Dilek, a 30-year-old engineer. "That is why we are now taking matters into our own hands. We trust civil society more than politicians."

The arrested include Mesut Gecgel, the Istanbul Province chairman of the left-wing Freedom and Solidarity Party (ODP), who helped organize the demonstrations in Besiktas.

Gecgel reported his arrest on Twitter. "I am being detained for protesting against the 'legitimate Yes' votes. The horse thieves are never idle. The country is ours, we won!"