Trade unions have coordinated a general strike across Spain and Portugal to protest against austerity measures. Transport has been halted, flights grounded, and schools closed as protestors plan to take to the streets. 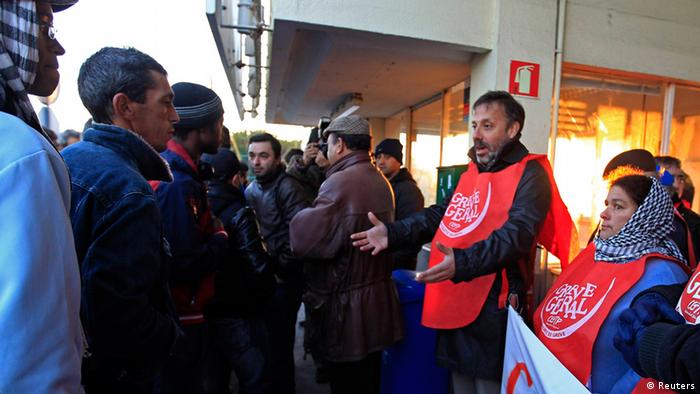 Workers in Spain and Portugal, along with supporters in Italy and Greece, were to demonstrate against austerity policies on Wednesday in what the European Trade Union Confederation (ETUC) has declared a "European Day of Action and Solidarity."

The international coordination shows "we are looking at a historic moment in the European Union movement," said Fernando Toxo, head of Spain's biggest union, Comisiones Obreras.

Spain in turmoil ahead of general strike

Spanish trade unions have called a general strike for Wednesday. Some Spaniards fear "Greek conditions;" others are convinced the country needs radical reforms. (12.11.2012)

In Portugal, which accepted an EU bailout last year, public and political opposition to austerity is mounting, threatening to overturn new measures sought by Prime Minister Pedro Passos Coelho. His policies were held up this week as a model by Germany's Angela Merkel, a figure of scorn in crisis-hit southern European countries.

Spain, where one in four workers is unemployed, is now on the brink of calling for a European bailout but the rescue could require even more EU-mandated budget cuts.

In Spain, 22 percent of the workforce are union members and in Portugal about one fourth of the 5.5 million strong workforce is unionized.

Unions have planned rallies and marches in cities throughout both countries, with a major demonstration beginning at 6:30 p.m. local time in Madrid.

Coming to a halt

Just 20 percent of Spain's long-distance trains and a third of its commuter trains are expected to run. Lisbon's Metro will be shut completely and only 10 percent of all trains will run under minimum service.

"The first ever Iberian strike" would be "a great signal of discontent and also a warning to European authorities," said Armenio Carlos, head of Portugal's CGTP union, which is organizing the action there.

Italy's biggest union, CGIL, has called for a work stoppage for several hours across the country on Wednesday. The transportation ministry expects trains and ferries to halt for several hours and students and teachers are expected to march.

Spain's economy, the euro zone's fourth biggest, will shrink by some 1.5 percent this year while Portugal's economy is expected to contract by 3 percent.