Millions of workers joined strikes across southern Europe on Wednesday to protest against spending cuts and tax hikes. In Spain, some fear "Greek conditions;" others are convinced the country needs radical reforms. 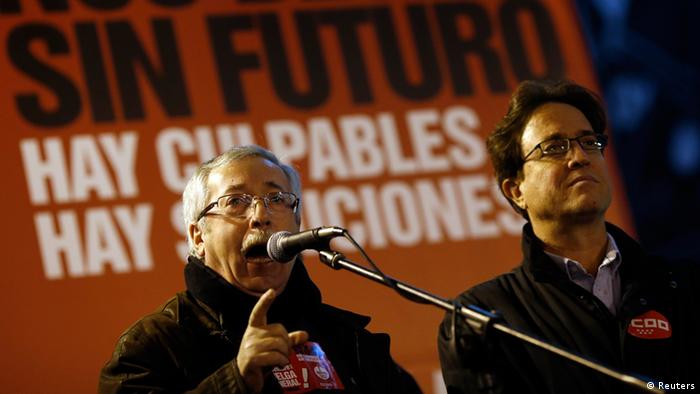 For 40 years, Alberto Lopez, a retired history teacher, has been trying to instill in his students the fragility of Spain's democracy as a result of the ongoing repercussions from the civil war and the long years of General Francisco Franco's dictatorship: "I think that deep down, we all knew the situation would explode some day."

The transition from a dictatorship to a democracy was no guarantee for prosperity and peace, Lopez told Deutsche Welle: peace came at a price. "We must completely reorganize our state and start anew," he says.

In Madrid, on Valencia's university campus and the squares of Barcelona, many thousands of people are braving wind, rain and cold weather almost daily as they protest and demand reforms. They include civil servants demanding more transparency, justice and secure jobs. Spain's public administration is under fire for having too many apparently useless foundations, universities, schools and overlapping authorities.

Oscar Vigiola, head of production at Spain's 529 film production company, is one of the few Spaniards at management level who support the mass protests. "Our government did not fulfill its election pledges - they lied," he says. The Spanish people did not legitimize the cuts and austerity measures at the ballot boxes: "They have a right to influence the government's course in this manner."

Prime Minister Mariano Rajoy's course includes a shake-up of the state health-care system. He plans to introduce reforms which are common in many parts of the world, including Germany: patients would have to pay additional fees to consult certain doctors and receive prescriptions, many drugs would no longer require prescriptions and hospital administrations would be privatized. The government also plans massive cuts in the education sector: almost 40,000 teachers would lose their jobs.

The EU has also been putting pressure on Rajoy's conservative People's Party (PP) to partially privatize many state-run firms, such as the Renfe rail company, to shed these companies' debt. Civil servants' wages and social benefits face cuts. Even more tax hikes are expected to add to the increase in VAT from 18 to 21 percent in September. "Many measures are right and necessary, even if they generate more unemployment for the time being," says Ignacio de Benito, manager of Crisbe consultancy. 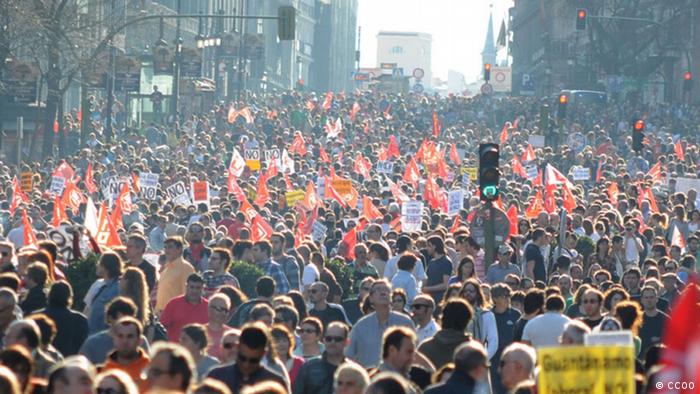 Spain's UGT and CCOO trade unions do not agree. In cooperation with unions in neighboring Portugal, they have organized their first joint general strike. They see this as an opportunity to win back credibility they've lost among Spain's workers. After years in which they have felt largely irrelevant, they are once again in demand. "Austerity and growth must go hand-in-hand to stimulate the economy and create jobs," says CCOO spokesman Fernando Lozcano.

The numbers are shocking: unemployment has reached a record of over 24 percent. In one out of ten Spanish households, both parents are currently jobless. Youth unemployment has passed the 50-percent mark.

Every one of the figures stands for a personal drama. Last Friday, a woman jumped to her death from a window as eviction loomed because she could no longer pay her mortgage. According to Spanish authorities, more than 500 people lose their homes every day for the same reason.

The suicide appears to have shaken politicians to the extent that Spain's major parties, the PP and PSOE, have pledged to do everything in their power to prevent such tragedies from happening again. "The very least we can do is to offer people who can not pay their debts a roof over their heads and force the banks to negotiate with their customers," Violeta Fernandez, an activist with the 15M citizens' group, says. 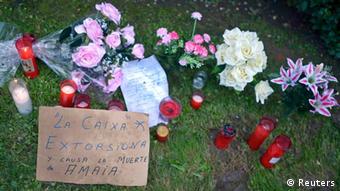 The suicide of a mortgage defaulter caused public anger

"In Spain, most mortgage contracts do not limit security to the house or apartment in question," Ana Sacristán, real estate expert at Roedl & Partner offices in Madrid, told Deutsche Welle. "People lose their homes, but they still have to go on paying their debt. It's a vicious circle."

"Everything appears to be in total chaos," says Roberto Centeno, a Spanish engineer and economics professor. The autonomous region of Catalonia is broke and wants money from the Spanish state - at the same time, Catalonia is demanding independence from Spain. "And now the Balearic Islands, Spain's most important tourist region, are insolvent - all of that is difficult to understand," Centeno says, adding help isn't likely to come from within Spain: "Everyone is too mired in this bog to allow for real reform."

Corruption on the rise

Jose María Gay, a Spanish economist, says the system is in trouble not "because of the austerity cuts but because corruption has gotten out of hand."

And according to entrepreneur Juan Vila, Spain's trade unions are part of the corrupt system. "They've been overfed and now they act in their own interest only, to make sure they are not abolished," he says. "They no longer really represent workers' interests."

Tired of trade unions and demonstrations, French teacher Aurora Gomez Arahal has lost all hope of change: "Even the EU bailout fund can not help us any more," she says, adding that wherever she looks, she just sees "cuts and confusion."

Spanish politicians have pledged bipartisan steps to halt evictions after a woman mortgagor's suicide caused widespread anguish. Previously, a newsstand owner in Granada hung himself in anticipation of losing his home. (10.11.2012)

Spanish airline Iberia is bracing for layoffs affecting thousands of workers. The carrier, which is part of the International Airlines Group (IAG), has been logging heavy losses over the past nine months. (09.11.2012)

Joblessness in Spain has risen as the recession in the country continues to bite. Spain already has the highest unemployment rate of all industrialized nations, and large-scale relief is not in sight. (05.11.2012)