Clashes between students from Bogazici University and Turkish police show no sign of abating. Many students have been arrested, while the interior minister has lashed out with homophobic hate speech over an artwork. 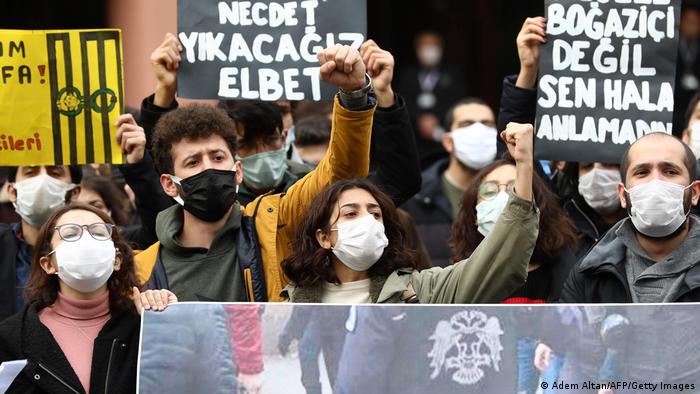 Turkish police have responded to protests by students at Istanbul's Bogazici University with an iron fist. On Monday alone, they arrested 159 students — 61 of them remain in custody, according to the Turkish news agency Anadolu.  Since early January, there have been regular police raids or arbitrary arrests of students who have been protesting against the appointment of Professor Melih Bulu, a supporter of Erdogan, as the rector of the prestigious university.

Over the last four weeks, there have been numerous clashes around the Bogazici University campus. But one incident has proved particularly polarizing in Turkey.

On Saturday the students organized an art exhibition on the campus. One work showed the Kaaba, considered one of the most sacred sites in Islam, alongside the rainbow flag, the symbol of the LGBTQI+ movements. The Istanbul prosecutor's office has launched an investigation, and four students were arrested, with two of them still in detention. 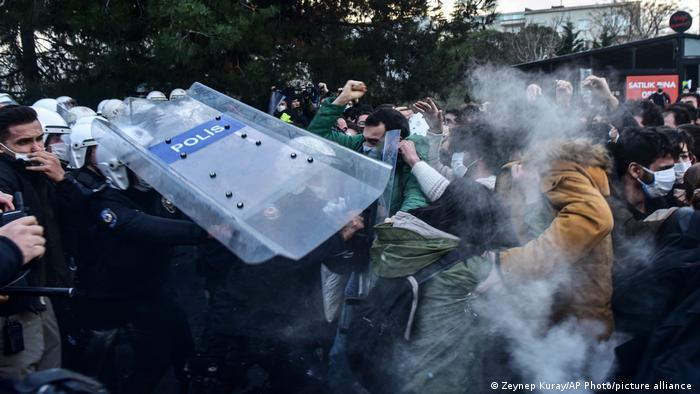 Afterward, Turkey's interior minister, Suleyman Soylu, condemned the students in a tweet: "Four LGBT perverts who denigrated the Kaaba at Bogazici University have been arrested." On Tuesday, the social media platform Twitter put a disclaimer on the post for inciting hatred.

Ali Erbas, Turkey's most senior cleric and the president of the top religious body, Diyanet, also used Twitter to censure the artwork, posting: "I condemn the attack on the Muslim's holy site, the Kaaba and on our Islamic values." He said that he would take legal measures against the people responsible.

His critics, however, see the state as the aggressor. "Interior Minister Soylu's statements are an example of hate speech," according to constitutional law expert Serkan Koybasi. He accused Erbas of violating the principle of secularism long enshrined in Turkey's constitution — a religion and its values, he said, could not be defended by court actions.

Sule Ozsoy Boyunsuz, a constitutional law expert at Galatasaray University, also sharply criticized the interior minister's statements. She said his comments were polarizing in a way that senior politicians with a lot of responsibility should avoid. She also sees the controversial comments as a violation of the personal rights of gay, lesbian, transgender and queer people.

Many legal experts and lawyers have also criticized the actions of the Istanbul police. Law professor Sule Ozsoy Boyunsuz said that the European Convention on Human Rights defended the freedom of artistic expression to a considerable degree: "The two students were arrested for 'incitement of hatred and ill will' and for 'insulting religious values.' But I do not see any criminal offense such as the incitement of hatred and ill will." 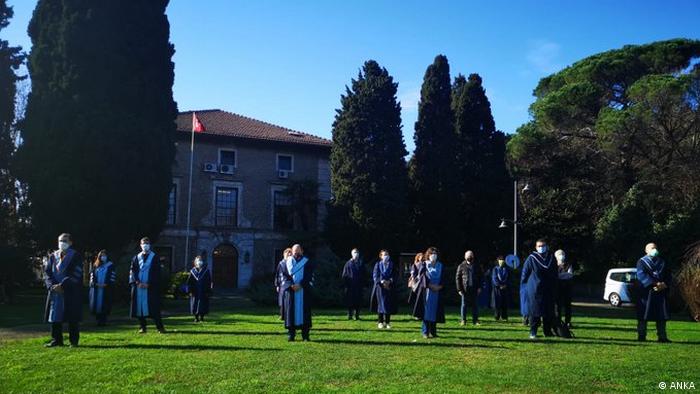 The students and many professors see the choice of Melih Bulu as university rector as interference with academic freedoms and a violation of the democratic values of the university. President Recep Tayyip Erdogan ordered the appointment of the 51-year-old by personal decree.

Bulu is a founding member of the AKP party in Istanbul's Sariyer district. He wanted to stand for the governing AKP in the 2015 parliamentary elections but was not nominated. Some students and university lecturers think that the professor, with his conservative background, is not a good fit for Bogazici University, which is seen one of the country's most eminent bastion of liberalism.

The demonstrators are also mobilizing support via social media platforms, as is now often the case. #AsagiBakmayacagiz (English: We won't keep our heads down) has gone viral on Twitter. The hashtag was sparked by an online video which showed police officers calling on protesting students to do just that.

The police later tried to frame the officers' words as an anti-coronavirus measure. Numerous videos are now circulating under the hashtag that reveal the police's tough actions against protesters — images that are rarely being shown by pro-government newspapers and TV stations.

The demonstrators are also trying to circumvent strict press censorship with the new Clubhouse app. Some 5,000 students, journalists and politicians have exchanged views using the tool. Their conclusion is that the Turkish government is trying to use the incident with the rainbow flag to portray the demonstrators as sinful blasphemers and criminalize their protests.

Turkish activists are sounding the alarm about inhumane conditions for those locked up "for political reasons." Reports of solitary confinement, physical and emotional abuse, and denial of medical services are common.

A Turkish police officer who identifies as homosexual has been suspended from duty in the city of Van. He was in the force for over 10 years. DW details his ordeal.