Ankara blasts US over soldiers' use of Kurdish emblem

Turkey expressed outrage at images that surfaced showing US soldiers in Syria wearing the emblem of the Kurdish YPG militia group on their uniforms. The issue has resulted in a diplomatic row between the two countries. 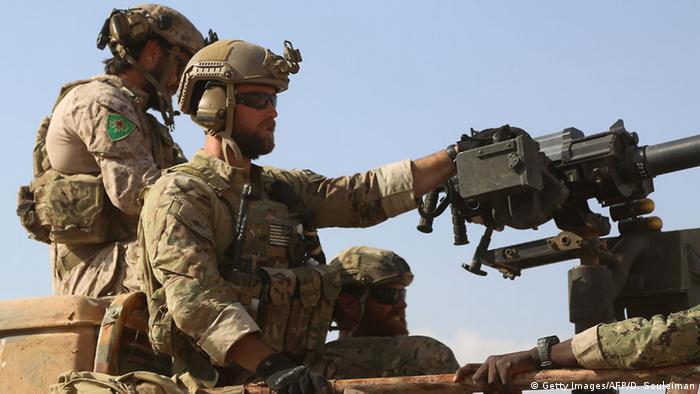 Turkish Foreign Minister Mevlut Cavusoglu said use of the emblem was "unacceptable," adding that US support of Kurdish fighters was "two-faced." Ankara classifies the YPG as a terrorist organization that wants to create an autonomous Kurdish state.

A US military spokesman responded by saying that the use of the patches had been "unauthorized and inappropriate," adding the soldiers had been asked to remove them. Army Colonel Steve Warren stressed, however, that the US would continue to support the group in the ongoing fight against the self-styled "Islamic State" (IS).

"Corrective action has been taken and we have communicated as much to our military partners and our military allies in the region," he told reporters.

Pentagon press secretary Peter Cook declined to comment on the photos but said that when Special Forces operate in some areas, they do what they can to blend in with the community - to enhance their own security.

Cavusoglu made a sarcastic remark, presumably in response to Cook's statement. He suggested that US soldiers wear the IS insignia when they venture out to other parts of Syria in order to blend in.

Turkey regards the YPG as an extension of the outlawed Kurdistan Workers' Party, or PKK, which has been fighting for autonomy in Turkey's largely Kurdish southeast since 1984. Washington also classifies the PKK as terrorists while backing the YPG Syrian Kurdish militia in the fight against Islamic State. Aided by US-led air strikes, the YPG has driven IS from wide areas of northern Syria in the past year.

The US has a small contingency of roughly 200 military personnel in Syria presently, with the main mission of training and consulting Kurdish fighters in their fight against IS.

The YPG is currently mounting a new offensive alongside other Syrian Democratic Forces (SDF) fighters heading for the de facto IS capital Raqqa after reportedly liberating a number of villages in northern Syria earlier in the week. Other reports, however, state that IS has been gaining ground despite the losses.

Details about the operations cannot, however, be independently verified due to ongoing fighting and limited reports coming from the area.

The women in the Syrian city of Raqqa suffer greatly under the oppression of the terrorist organization "Islamic State." DW had exclusive access to some of those women, who spoke about their daily lives. (06.04.2016)