On Thursday an elaborate military ceremony will bid Chancellor Angela Merkel farewell. One song chosen by Merkel for the occasion, by punk legend Nina Hagen, has surprised many. 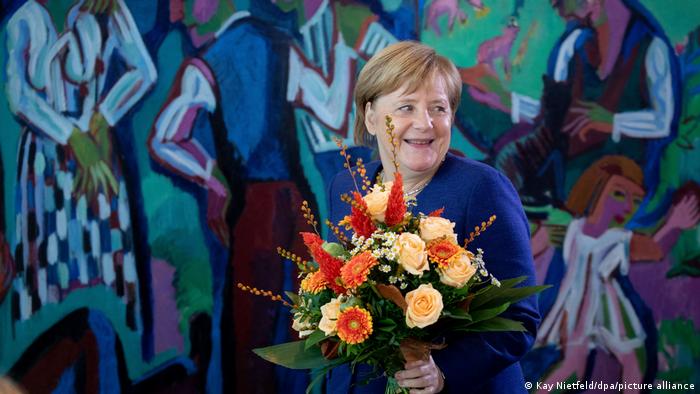 Angela Merkel is finally bidding farewell to the office of German chancellor after 16 years in the top job.

Although she will remain in office on an interim basis until the next chancellor is confirmed, Thursday evening will see her attend a military tattoo in her honour.

The so-called "Großer Zapfenstreich" is the highest military ceremony in Germany and comes complete with a torchlight procession, soldiers performing music and marching with clockwork precision.

Like her predecessors, Merkel has been allowed to request three songs for the military marching band to play.

Two are unlikely to raise eyebrows: The 18th-century Christian hymn "Großer Gott, wir loben dich" ("Holy God, We Praise Thy Name") — likely a nod to her political party's Christian roots and her upbringing with a Protestant pastor for a father.

The other is the popular song by German singer Hildegard Knef "Für mich, soll's rote Rosen regnen" ("It should rain red roses for me"). It's a wistful tune about teenage dreams and ambition, with lyrics such as "I want all or nothing."

Yet one song chosen by the chancellor may come as a surprise to many — the 1974 East German hit sung by punk rocker Nina Hagen, "Du hast den Farbfilm vergessen" ("You forgot the color film").

An iconoclastic pop star back in the German Democratic Republic, Nina Hagen became the punk icon of West Germany after the fall of the Berlin Wall.

It's a unique selection, not least because Merkel has rarely referred to her East German upbringing in Templin, a town in the region of Brandenburg in the former East. During her youth she listened to the song in which Hagen sings an angry lament to her boyfriend for only taking black and white film on a vacation.

It was such a hit at the time that many who lived in the former East still remember the lyrics, especially the famous line: "No one will believe how beautiful it was here."

Although it was not censored by the government, the song was widely understood as a criticism of the dark and drab German Democratic Republic, where color film was a rare commodity.

The choice could finally see Merkel revealing her "Ostalgie" — nostalgia for East Germany. Or perhaps the chancellor was showing her humorous side.

In fact, around 30 years ago, Angela Merkel, then federal minister for women and youth, met Nina Hagen on a TV talk show. During a discussion about drug addiction, Hagen blew up at her on camera: "I'm fed up with your lying, with your hypocrisy" she said. Merkel has likely since forgiven her.

A military farewell with a long history

Bidding farewell to German chancellors, presidents and defense ministers with a military tattoo is a tradition dating back to the 16th century. Back then the ceremony in military camps was marked by much drinking and gambling.

A routine had to be introduced to signal the end of the festivities: An officer or sergeant, accompanied by a drummer and a piper, walked through the camp and struck the taps of alcohol barrels with his saber or baton, meaning no more beer, schnapps or wine could be served. Those who did not comply were subject to severe punishment.

Down the years, the "Zapfenstreich" has developed into the ceremony it is today. However, some see it as an inappropriate adherence to symbolism that dates back to darker times.

For example, when German soldiers returning from Afghanistan this year were met by a torchlight military procession featuring hundreds of steel helmets gleaming in front of the Reichstag, some critics said it reminded them of Nazi marches.

Playlists of the past

In recent decades. the music requests have lightened up the ceremony. Former Defense Minister Thomas de Maiziere, for example, had 1985 euro dance hit "Life is Life" by the band Opus on his playlist — a song popular with German vacationers in the party hotspots of Mallorca.

When President Christian Wulff had to resign from his office after just 20 months following a scandal, he was met with the jarring sound of vuvuzelas played by spectators venting their displeasure. The Bundeswehr orchestra bravely played "Somewhere Over The Rainbow" in an attempt to drown out the noise.

Former Chancellor Gerhard Schröder challenged the orchestra with the 1920s ballad "Mack the Knife" from Bertolt Brecht and Kurt Weill's "The Threepenny Opera," and George Gershwin's "Summertime." Schröder was also ridiculed for his choice of the languorous Sinatra classic, "My Way".

Yet one song seems to be a favorite among outgoing politicians: The anthem "Ode to Joy" by Ludwig van Beethoven. It's been requested three times, including by former German Defense Minister and current President of the European Commission, Ursula von der Leyen.

The closing lyrics of Hildegard Knef's "It should rain red roses for me," chosen by Angela Merkel for this week's farewell ceremony, perhaps indicate something of the chancellor's hopes for the future: "I should submit, be content … I still want to win; want all or nothing."

Angela Merkel will retire from politics when she leaves office. But, if the song's lyrics are any clue, it's far from the end of the 67-year-old's journey.