Ancient Gilgamesh 'dream tablet' to go back to Iraq 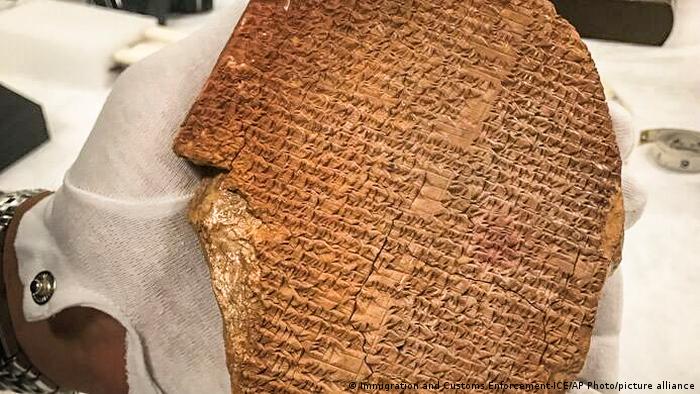 The 'dream tablet' is imprinted with cuneiform script

UNESCO officials will return a stone inscription bearing part of the Epic of Gilgamesh, one of the oldest known works of literature in the world, to Iraq, the UN agency has said in a statement.

They will hand the tablet to their counterparts from Iraq at a ceremony in Washington on Thursday, September 23, at the Smithsonian Institution, the statement said.

Some 17,000 other artifacts that were also looted following the US invasion of Iraq in 2003 will be returned to Baghdad at the event.

"By returning these illegally acquired objects, the authorities here in the United States and Iraq are allowing the Iraqi people to reconnect with a page in their history," UNESCO Director-General Audrey Azoulay said, adding that this restitution was a "major victory over those who mutilate heritage and then traffic it to finance violence and terrorism."

In July, the US Department of Justice announced it would be returning the artifacts to Iraq.

Calling the restitution "unprecedented," Iraqi Culture Minister Hassan Nazim said  in a press statement at the time that it was "the largest return of antiquities to Iraq" and a "result of months of efforts by the Iraqi authorities in conjunction with their embassy in Washington."

In 2018, the British government returned ancient objects that were similarly looted after the US invasion and then appeared in England.

Speaking to DW, Iraqi historian Abdullah Khorsheed Qader, who is an archaeologist and professor at the Salah-al-Din University in Erbil, northern Iraq, and director of the Iraqi Institute for the Conservation of Antiquities and Heritage, said he was elated the objects were being brought back to his country. "Feeling great and hopeful because of the positive responses from the United States of America," he told DW in an email in July.

"Most of these artifacts were part of the materials that were looted from the Iraq Museum in Baghdad during the US invasion," Elizabeth Stone, an archaeologist and professor of anthropology at the Stony Brook University in New York, told DW.

Stone has been a part of various archaeological expeditions to Iraq, including a notable one in 2012, where she and her team excavated close to the site of Ur, the home of the biblical figure of Abraham.

According to Stone, these objects left Iraq as part of an illegal trade in antiquities. "It was clear to everyone that these had been stolen from the Museum since they had catalog numbers on them and so could not have come from illegal excavations."

On July 27, a New York court ordered the forfeiture of the object, which was reportedly purchased from the family of a London coin dealer by an American antiquities dealer, the US Department of Justice said in a statement.

The Sumerian poem is considered one of the oldest works of literature, and together with several thousand other objects, comprises one of the largest caches of archaeologically important artifacts stolen from Iraq during its turbulent years in the past few decades.

According to UNESCO, the Gilgamesh tablet was stolen in the 1990s, following the Gulf War, emerging fraudulently in the US market in 2007.

Together with US organizations like the Smithsonian Institution and the University of Delaware, Qader is training young professionals and educating the community.

This article was updated from a previous version published on July 30, 2021.