The Africa Union has decided to send 7,500 troops into Nigeria to help fight the insurgency in the northeast. Analysts doubt that such a deployment will have a long-lasting effect. 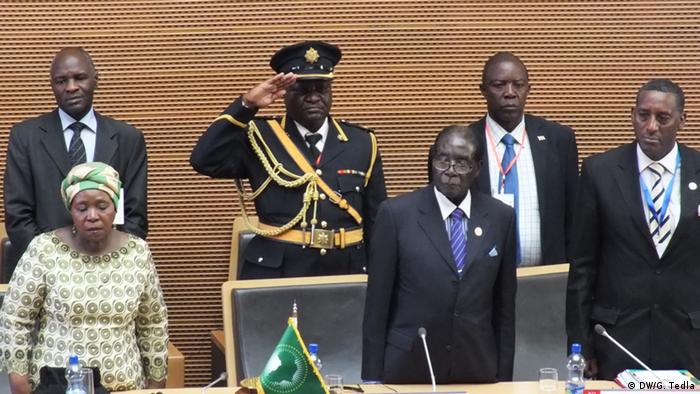 The Africa Union announced that 7,500 troops from five West African countries will be deployed to halt the militant group Boko Haram. DW talked to intelligence analyst Jesper Cullen of the security group Risk Advisory to find out what this deployment will mean for the conflict raging in northeastern Nigeria.

DW: African leaders have agreed to send 7,500 troops to fight the Boko Haram insurgency in northeastern Nigeria. Is that number of troops enough to take on the militants?

Jesper Cullen: No, I really don’t think so. In comparison AMISON, the AU force in Somalia, has over 22,000 troops. There are also questions about where exactly these AU forces are going to be deployed and whether the Nigerian military and the Nigerian government would actually allow them to operate inside Nigeria. Even if these 7,500 troops are deployed inside of Nigeria, it still looks unlikely that it would have a significant impact on the capabilities of Boko Haram.

The Nigerian government has insisted it can defeat the insurgents and has been reluctant to call for any foreign assistance. Realistically speaking, can the AU put troops on Nigerian soil?

The Nigerian government has; on several occasions in the past years; said it is willing to work with others countries in the region to fight Boko Haram. But when it actually comes down to it, they have resisted any cooperation. They have stopped working with other countries in operating on Nigeria territory. And that is a problem the Cameroonians have had. They are fighting Boko Haram in Northern Cameroon, but as soon as Boko Haram moves across the border into Nigeria, there is nothing really they can do.

If the AU does eventually manage to send an intervention force into Nigeria, what kind of mandate would the troops be coming with?

That remains unclear for now. The AU has not really put out much detail about what this force would be. They are planning to put out the final details in the next week or so. And it would still depend on a UN Security Council approval. But by comparison the AU has peacekeeping missions in Somalia where it has quite an offensive mandate and they actually take on al-Shabab. They have had troops deployed within THE Central African Republic, which is now a UN force. That was much more to protect civilians rather than actually fighting armed groups.

Is the AU overstretching itself by being into so many different conflicts in Africa?

There are certainly a lot of issues in various countries across the region that the AU is trying to deal with and a contribution of 7,500 is not going to be significant. It is also worth remembering that there are countries that have agreed to take part in this multinational AU force. Some of them are already contributing troops to fight Boko Haram. Cameroon and Chad have already deployed several thousand people to northern Cameroon to fight Boko Haram. It’s not clear whether 7,500 troops would be further troops or if they would just move their current deployment under an AU banner. AU is certainly stretched with trying to deal with a lot of problems. It is lacking resources, lacking troops from contributing countries.

The Boko Haram is notorious for its guerilla tactics in fighting the Nigerian forces, what kind of strategies should the AU forces use to fight the insurgents?

It’s not going to improve over night. There are a lot of changes needed to be made domestically in Nigeria, if this is going to be a lasting improvement. Both the government and the military need deep-rooted reforms addressing corruption, training, supply and equipment of the military. So very little suggest that this is going to change anytime soon. And then the long term causes of the insecurity in northeast Nigeria need to be addressed as well: The more socio-economic issues that are contributing to why many people are joining Boko Haram.

President Goodluck Jonathan has cancelled his campaign trip to the northern region of Nigeria. This insurgency in the region is thus having a big impact on the elections, isn’t it?

Definitely. It is almost certain that Nigeria won’t be able to hold elections in much of the three northeastern states; Borno in particular and also parts of Yobe and Adamawa. This would discredit the elections. There are quite a lot of accusations from the opposition that the government has allowed the insurgency to continue because it is affecting an area where the opposition is likely to perform strongly. So taking away votes from the opposition is an allegation which contributes to the civil unrest, which is probably the more pressing concern of the next few weeks around the election, rather than terrorism.

Jesper Cullen is an intelligence analyst with the security group Risk Advisory.

Opinion: The Africa Union is making progress - despite Mugabe's selection

At the African Union summit, the member states elected 90-year-old Robert Mugabe as their new chairman. Despite this, the union is making progress, writes DW's Ludger Schadomsky. (01.02.2015)

Hundreds of rebels were killed charging the key city of Maiduguri in northeast Nigeria, army sources have said. Several civilians also lost their lives to bombs and grenades during the five-hour battle. (01.02.2015)