Analysis: After Georgia, Will There Be Other Separatist Hotspots? | Europe| News and current affairs from around the continent | DW | 17.08.2008

As German Chancellor Angela Merkel heads to Georgia on Sunday, Aug. 17, to continue mediating in the ongoing conflict with Russia, Western experts mull the chances of escalations elsewhere in the former Soviet sphere. 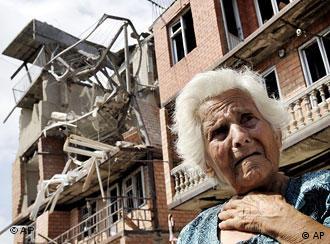 Will other former Soviet states suffer the same fate as Georgia and South Ossetia?

When Western powers in February gave their blessing to the independence of the Serbian province of Kosovo, opponents warned it would trigger separatist violence across Europe.

Now, with the fires of secessionist war still smoking in Georgia and its breakaway provinces of Abkhazia and South Ossetia, the West is wondering nervously whether other conflicts might be about to break out elsewhere in the former USSR.

Independence for the Georgian provinces "would undoubtedly give impetus to independence ambitions" in the breakaway Moldovan region of Transnistria, said Colonel Christopher Langton, security analyst at the Institute for International Strategic Studies in London.

Debate still rages as to the exact role played by Russia in the Georgian war, with Tbilisi accusing Moscow of aggression and Moscow insisting that it only intervened to protect civilian lives.

But Western analysts agree that before the conflict, Russia was the breakaway regions' main supporter -- especially once Georgia began to aim for NATO membership following its 2003 "Rose revolution."

And they say that Russia's intervention is a warning for Ukraine and Moldova -- two former-Soviet states who are also edging towards the West, but who have Russian military forces on their territory.

The conflict is "a stern warning to Ukraine that what can happen if it tries to move closer to NATO is the division of the country," said security expert Dusan Reljic of the SWP Institute for International and Security Affairs in Berlin.

It is also "the acceleration of Russia's ongoing effort to increase its influence" around its borders, Langton said.

Moscow has both a strong military presence and broad-based popular support in Transnistria and Ukraine's Crimean peninsula, which Russia ceded to its "Socialist brother" in 1954.

Ukraine monitoring its own separatist province 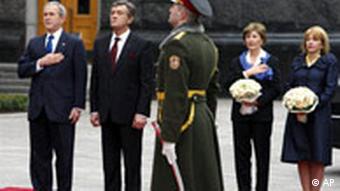 Bush and NATO have plans for Yushchenko's Ukraine

And analysts now say that, given NATO's refusal to rule out further Eastern expansions, Moscow might feel that the best way to stall that process would be to promote secession in the two areas.

"When there are Russian populations linked to Russia, then those territories could break away ... So if Ukraine insists on joining NATO, part of its territory could split away," Reljic said.

But is it really likely that Russia would call for full independence for the Crimea or Transnistria, given the international storm which its actions in Georgia have already provoked?

Observers say that the option cannot be ruled out in the long term, given that one of Russia's prime foreign-policy goals is to rebuild its own influence in Europe at NATO's expense.

Russian leaders have already said that they see NATO's offer of eventual membership for Georgia and Ukraine as a direct threat.

And that gives the Crimea and Transnistria immense strategic significance as two Russian-dominated areas on Ukraine's fringe.

Ukraine's desire for NATO membership "makes Transnistria strategically important for Russia," while any increase in tension between Moscow and Kiev will "resonate in the Crimea," Langton said.

In the short term, such fears are unlikely to materialize. 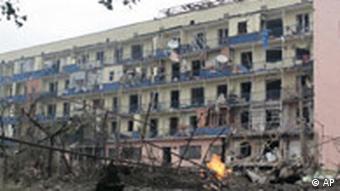 Russia's hands are full dealing with the aftermath of the Georgian war, and some NATO members say the conflict proves that Georgia is in any case not ready for membership.

But with key NATO members, especially the US, pressing for Ukraine and Georgia to join, there is a danger that Russia may end up feeling it has no choice but to weaken its neighbors before it is too late.

"In the past, the answer would have been no, this is not a proxy conflict between great powers. But increasingly the answer is becoming yes," Langton said.

Thousands of people participated in peaceful protests in Estonia, Latvia and Lithuania on Monday to show support for Georgia in its current conflict with Russia. (11.08.2008)