The Berlinale International Film Festival is Germany's most important film event. Every February it draws cinema celebrities and fans from around the world. DW's Hallie Rawlinson reports on her first time attending. 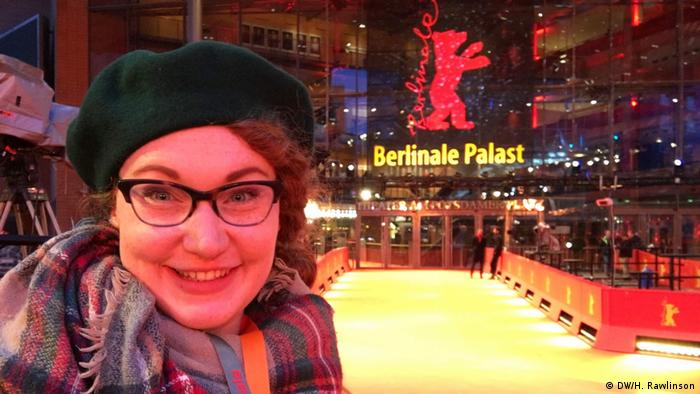 If you had told me a few years ago that I'd be standing on a red carpet in Germany, just an arm's length away from celebrities like Casey Affleck, Andie MacDowell and Juliette Binoche, I would have laughed. While I am from the USA — land of Hollywood, glitz and glamour — I am more specifically from Ohio, which rarely sees A-list celebrities (with the exception of the occasional Fast and Furious or Avengers movie being filmed in Cleveland). To be quite honest, I did not think that moving to Berlin, Germany would increase my chances of being star-struck. 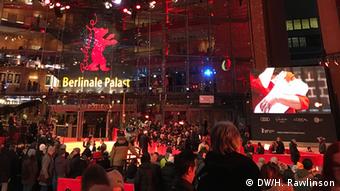 The Potsdamer Platz is the epicenter of the Berlinale Film Festival

In early February, my partner and I were mutually disappointed that Christian Bale's new film, VICE was still not in the cinemas in Germany, as it had been released in the US back in December. I jumped on the internet and, a few clicks later found that the film would actually be premiering in Germany a couple weeks early at Berlin's International Film Festival, known as the Berlinale! But how could I possibly get tickets to a movie premiere? The only film festivals I really knew of were Sundance, Cannes and Venice, which are notoriously star-studded, with big-name films and are often unreachable to the general public. In the midst of feeling uncertain about whether I had a chance of actually getting to see an Oscar-nominated film early, I found that there were several showings with tickets yet to be sold! It turns out the tickets for each film are sold about two days before, both online and at the theaters, and anyone can purchase them. Game on. 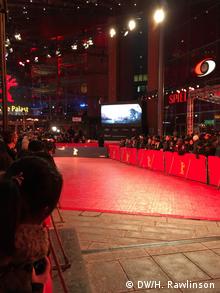 On the red carpet at the Berlinale Palast

Since the film wasn't for another week, I decided to fully immerse myself in the Berlinale as a cultural experience. Not knowing what to expect, I persuaded a colleague who was doing a news report to take me along to the red carpet at the Opening Ceremony. It's an event which promises to flood Berlin's Potsdamer Platz with stars and fans alike as those with an invite saunter into the glittering Berlinale Palast.

For those who want to experience the feel of a swanky European film festival without having to sell an organ to get an invite, I can't recommend the Berlinale enough. As soon as we stepped out onto Alte Potsdamer Strasse there were people buzzing all around us with an infectious electricity. From assistants dressed in black running by with their clipboards, to fans with glossy printed headshots for autographs of their favorite stars, it was clear that this was no normal day on Potsdamer Platz. 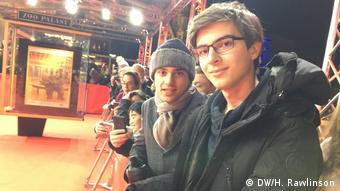 These boys came from the Ukraine to meet their hero, Casey Affleck

We quickly took our positions along the red carpet, eager to try to get a quote from a star when I realized you didn't have to have a press badge to do that. The fan area across from the press pool was every bit as close to the red carpet, and fans had the chance to get up close and personal with celebrities like the British star of that night's film, Bill Nighy (who couldn't help but give the paparazzi a taste of their own medicine by taking their picture with his cell phone). At the Berlinale, fans get to experience their heroes in a whole new light...that is, if they're willing to risk the cold.

The 'coolest' place to be

It's an unavoidable truth that Berlin in February does not feel like a balmy evening at the Venice Film Festival. On average, at this time of year Berlin floats around 1 degree Celsius (33° F) and the wind isn't what I would call forgiving. So, I came prepared with my knee-length wool coat, scarf and hat (I even put on tights under my jeans). If you ever want to ponder how the starlets are bearing to wear slinky little gowns from up close, you'll want to layer as well. After successfully getting a quote from German actress Heike Makatsch (of 'Love Actually' and 'The Book Thief'), I warmed up at the Berlinale Street Food Market just steps away from the red carpet. 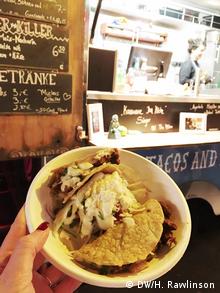 My delicious tacos from the Berlinale Street Food Market

I was struggling to decide between the juicy-looking cheeseburger or spicy Korean rice bowl when my little American heart grew three sizes at the sight of a Mexican street taco truck! My advice is to sample the culinary delights from as many of those trucks as you can. You might even find yourself passing the salsa spoon to Christian Bale or Tilda Swinton.

The light of my day

Invigorated by my experience the night before, I decided to head straight to the ticket office the next morning to see if there were any available for that day. Flipping through the program, I was amazed to see the quality of films offered at the Berlinale. The festival of over 400 films is not just showing indie flicks. Many anticipated movies from around the globe, not only play in Berlin, but even celebrate their world premiere in the German capital. This was the case with Oscar-winning actor Casey Affleck's new movie 'Light of My Life', which was scheduled to premiere in just a few hours. *Full disclosure: I was able to get access to a press showing ahead of the premiere that night. 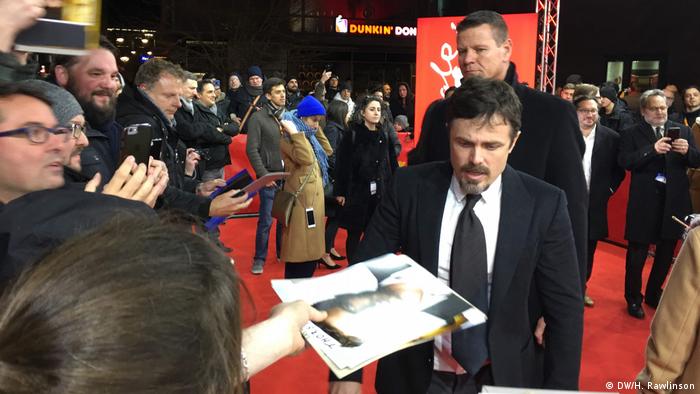 While I waited for the film to begin at the Cinestar Theater at the SONY Center on Potsdamer Platz, I couldn't help but stare at the incredible structure we were standing under. Potsdamer Platz is one of the few spots in Berlin that truly feel like a "skyscraper city" to me. The incredible glass roof was designed by Architect Helmut Jahn, and completed in 2000. Its funnel shaped glass and steel concept reflects both the daylight, and later the colored artificial lighting, in a way that makes the entire area sparkle in a futuristic manner. 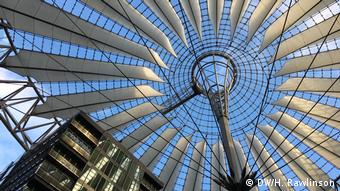 The incredible architecture of SONY Center at Potsdamer Platz

I had to peel my eyes away to head into the cinema for what I found to be an incredible film. After shedding a few tears as I watched the heart-tugging relationship between Casey Affleck's character and his daughter, played by the young Anna Pniowsky, I was thrilled to find that they would be walking the red carpet that night across town at the historical Zoo Palast theater. I decided to make sure to get a glimpse.

Perhaps the most exciting part of the Berlinale is how accessible it all is. Just the fact that I was able to see the world premiere of an incredible international film and then see its actors in the flesh just a few feet away from me was an experience I will never forget. I found the festival to be one that truly aims to bring film to the people, rather than coveting it as something only available to a select few deemed worthy. I think its accessibility is the reason the Berlinale has a way of weaving itself into the community. 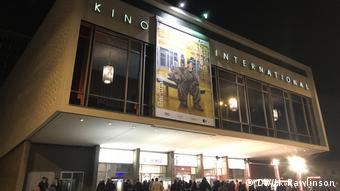 On Saturday morning, I dragged myself out of bed early to sit on the tile floor of the Kino International cinema in a long queue waiting for VICE tickets to be released. Still buzzing on the energy of the red carpet from the night before, I almost didn't hear the small voice of a woman behind me. She asked which film my partner and I were interested in, and then asked us kindly if we wouldn't mind helping her to purchase some extra tickets if she gave us the cash (the festival only allows a person to purchase two tickets per screening to avoid ticket scalping). We learned that her son is actually acting in one of the films and she wanted to invite the whole family. I could see just how proud she was, and I couldn't help but feel my heart beat a little stronger for the Berlinale: A festival that brings together international stars and lets a little boy make his entire family proud. I was still holding onto that thought as the lights were dimmed in the Kino International for our showing of VICE. I can't wait for next year. 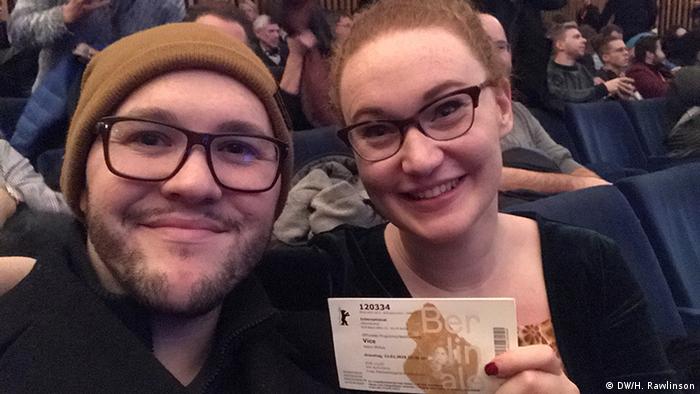 My partner and I ready to watch Christian Bale in VICE