The American aircraft maker has launched its Ampaire 337, the largest hybrid-electric aircraft ever flown. With commercial use beckoning for 2021, it's a step in the direction of reducing carbon footprints in the sky. 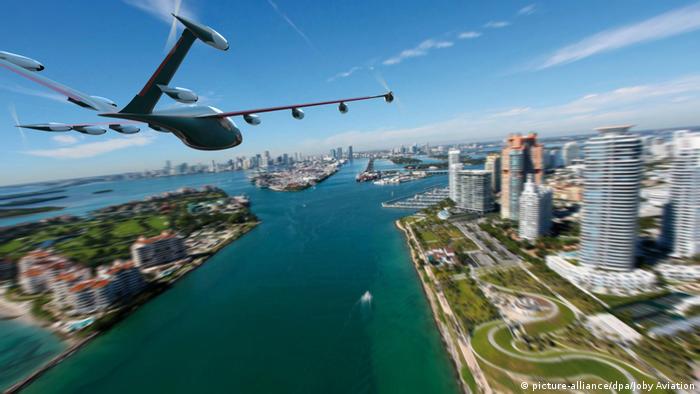 Los Angeles-based Ampaire unveiled its prototype electric-powered plane, the Ampaire 337, in a test flight above Camarillo Airport in California on June 6. Never before has a hybrid-electric aircraft this large actually taken off.

"Imagine that in just a few years you will be able to buy a ticket for a flight that is clean, quiet and inexpensive," says Kevin Noertker, the CEO of the startup, which was launched in March 2016.

The twin-engine plane will be able to carry seven to nine passengers and boasts a range of up to 100 miles (160 kilometers). It is based on the six-seat Cessna 337 Skymaster, which was retrofitted with Ampaire's proprietary electric propulsion system powered by a lightweight battery system.

The company said this is a "parallel hybrid," meaning the internal combustion engine and electric motor work to optimize power output as the plane flies.

Reducing aviation's impact on the environment is an industry-wide goal.

Facing pressure to reduce the impact of aviation on the environment, airlines and manufacturers are searching for green alternatives, from carbon offsetting schemes, to industry sustainability targets and alternative fuels.

Airlines have committed to achieving carbon-neutral growth from 2020 onwards and to cutting aviation's net emissions by 50% by 2050, compared with 2005 levels.

"Given the urgency of the climate crisis, today's historic flight not only signifies a huge step forward for aviation, it also shines a light on Los Angeles's leadership in transportation electrification," said Matt Petersen, CEO of the Los Angeles Cleantech Incubator (LACI). Ampaire belongs to the LA-based startup incubator's portfolio.

Ampaire also set out its path to commercial operations in 2021. Test flights would see the aircraft fly several times per week from June through August 2019 and would gather data about the electric propulsion performance characteristics, the company said in a statement. It announced it would start a pilot project on a commercial route on the Hawaiian island of Maui in late 2019.

The company is in collaboration with Vieques Air Link, a regional airline in Puerto Rico, to establish a pilot project in the region. Moreover, it has signed letters of interest with 14 other airlines across the world.

Airbus and SAS Scandinavian Airlines are also working together to explore the technology's potential, and have signed a memorandum of understanding this year for joint research into a hybrid and electric aircraft eco-system. In addition, the European aerospace giant has teamed up with its American rival Boeing to study alternative fuels, alternative propulsion systems and designing more fuel-efficient aircraft.

US aviation technology startup Zunum Aero, meanwhile, is working with Boeing and JetBlue since 2013 to develop an electric aircraft with a capacity of up to 50 passengers. The company started development in October 2017 of a 12-seat plane aiming to fly in 2020.

Other aviation companies working on electric planes include British startup Faradair, which hopes to certify its 18-seat plane by 2025, and US startup Wright Electric which plans to design a commercial airliner capable of flying distances of up to 300 miles. Joby Aviation — also an American startup — has spent the last decade developing its own electric motors and recently secured $100 million (€88 million) in financing to prepare for production and certification.

In Germany, a partnership between engineering giant Siemens, engine maker Rolls-Royce and Airbus is developing a plane called E-Fan X as a hybrid-electric airline demonstrator. 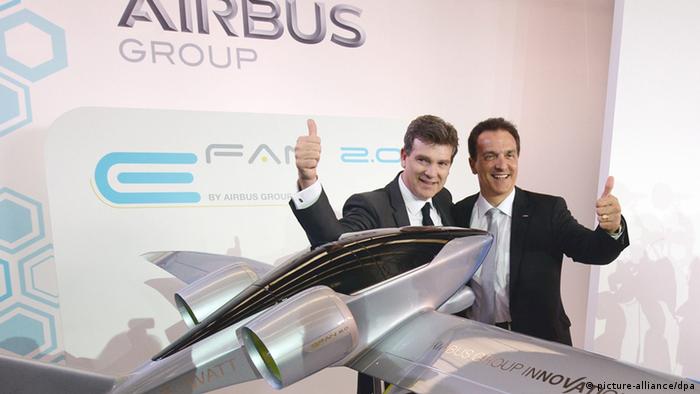 Arnaud Montebourg, then French Minister of Economy, and Jean Botti, Chief Technical Officer of Airbus Group, near the model of the electric aircraft E. Fan 2

Air travel is bad for the climate - but it doesn't have to be. Climate-friendly flight routes and renewable jet fuel could make flying in planes way more environmentally friendly - this would just need to be implemented. (05.07.2017)

Customers face a false choice between people or the planet when buying electric cars, according to a rights watchdog. Amnesty International has called for the industry to make "radical changes" in five years. (21.03.2019)