Amok is a typical Cambodian dish. It consists of steaming a curry in a banana leaf. In his restaurant Angkor Wat in Berlin, Dany Hok serves up Amok Trey - steamed fish.

Dany Hok has a fascinating life story. Born in Phnom Penh in 1969, he was there when the soldiers of the Khmer Rouge invaded the Cambodian capital in 1975. Under Pol Pot’s totalitarian regime, Hok's entire family was murdered, leaving him the sole survivor. 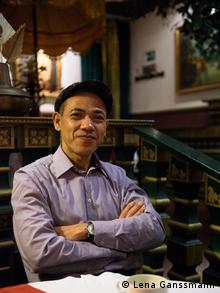 His mother died in his arms when he was only nine years old. He was lucky to escape, living alternately with foster parents and his uncle's family until he left Cambodia in 1988 for East Berlin. After the fall of the Berlin Wall, Hok met another Cambodian in West Berlin who was getting ready to open a new restaurant.

The restaurant where where Dany started working as a cook when it opened in 1990 was already named Angkor Wat. Located in Berlin's Moabit district, a former working class neighborhood, Angkor Wat was Germany's first Cambodian restaurant. Dany took it over in 2006.

Place two banana leaf circles into each steamer basket. Position so that the veins of the leaves cross in a 90-degree angle. Fill steamer baskets with the fish amok and steam for around ten minutes in a pot with a steamer insert or a food steamer. Serve with rice.