Amnesty International has called on the EU to put more resources into rescuing migrants trying to cross the Mediterranean Sea. It also called for safe and legal routes to the EU for people fleeing crisis zones. 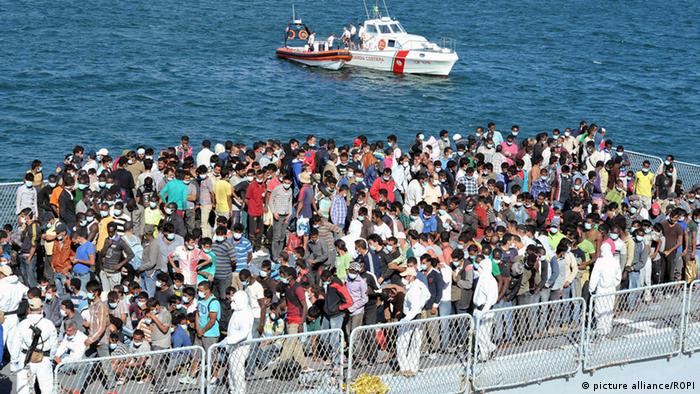 The report, released by the British-based non-governmental organization on Tuesday accused the European Union of "looking the other way" as an increasing number of migrants fleeing warzones and other crises in Africa and the Middle East sought refuge on the continent.

It also said that by fortifying its outer land borders in recent years, EU countries were forcing migrants to risk their lives by attempting to cross the Mediterranean.

"Placed on rickety boats by ruthless smugglers, every week hundreds of them sway between life and death, between hope and despair,"John Dalhuisen, Amnesty International's Europe and Central Asia program director said in a statement posted on the organization's website.

"More than 2,500 people have drowned or gone missing in the Mediterranean on their way from North Africa since the start of the year. Europe cannot ignore the tragedy unfolding on its doorstep," he added.

Amnesty called on the EU to commit an adequate number of ships to the Mediterranean Sea, tasked specifically with searching for and rescuing would-be migrants.

"That's what the EU and its members must urgently provide," Dalhuisen said.

Praise tempered by a warning

At the same time, Amnesty praised Italy for launching Operation Mare Nostrum in the wake of the Lampedusa shipwreck, in which more than 360 people died off the coast of the Italian island almost a year ago. It said the Italian navy had been responsible for rescuing most of the estimated 130,000 migrants who attempted the crossing in 2014; however, it warned that Italy could not continue to go it alone.

"Mare Nostrum has saved tens of thousands of lives at sea, but it is not a long-term solution. A concerted EU effort is needed to meet a shared EU responsibility,” Dalhuisen said.

Rome has threatened to end the operation, which reportedly costs Italy around 9 million euros ($11.4 million) monthly. Last month, the European Commission said the European border control agency Frontex would step in, but Amnesty warned that its success was dependent upon the willingness of member states to provide "adequate financial, naval and aerial resources" to the operation.

In the report, presented to the European Parliament, Amnesty also called on the EU to change its current policy, which makes the first member state in which a migrant arrives responsibly for processing their asylum claims. This policy, the report said, placed an unfair strain on a small number of member states, discouraging them from taking in migrants. It also said that in the long term the EU needed to establish safe paths across its borders.

"Ultimately, the death toll in the Mediterranean will decrease only if safe and regular routes in the the EU are opened," the report said.

While more and more people seek asylum in Europe, the EU's interior ministers are finding it hard to agree on how to divide responsibility for refugees between the EU member states. Italy has called for more solidarity. (08.07.2014)

President Joachim Gauck has urged Germany and the EU to take in more refugees and rethink policies. Speaking at a conference in Berlin, he called for more solidarity with refugees and among EU member states. (30.06.2014)