Italy has said it plans to triple its military deployment to the Mediterranean in a bid to stop migrant deaths. Over 400 migrants have died at sea in the past two weeks while trying to reach the Italian coast illegally. 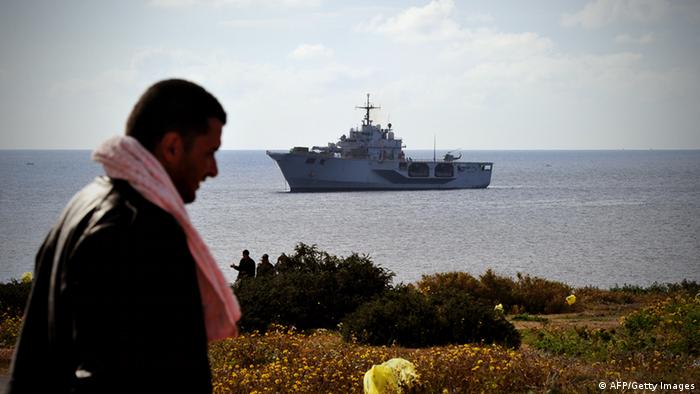 The Italian military is expected to launch a humanitarian mission in the Mediterranean Sea beginning Monday, according to the Italian government. A string of boat accidents involving hundreds of migrants prompted the move, which the Italian prime minister indicated was a only a temporary measure to prevent further deaths.

"We will triple the naval and air forces currently engaged in the Strait of Sicily," Prime Minister Enrico Letta said over the weekend, adding that his government intended to invest large sums of money in the mission.

The military deployment sought to "secure…the part of the Mediterranean which has turned into a grave over the past days," Letta added.

'Cemetery' in the Mediterranean

Migrants deaths have prompted calls from regional officials, including Maltese Prime Minister Joseph Muscat, whose coastguard has been working with Italian forces to rescue immigrants and recover bodies.

"The fact is that as things stand, we are just building a cemetery within our Mediterranean Sea," Muscat told the BBC in an interview.

Neither the Italian prime minister nor the defense minister provided a timeline for this week's operation. However, Letta indicated Italy would intervene only temporarily, pointing to hopes already expressed by other officials that the European Union would expand patrol operations by its border agency Frontex.

EU leaders are expected to discuss the crisis at the next European Council meeting, scheduled for October 24-5.

A string of shipwrecks since early October has claimed over 400 lives. Each of the accidents occurred within roughly 100 kilometers of the Italian island Lampedusa, which lies between Tunisia and Malta. Authorities continue to search for missing people and expect the death toll to rise.

On October 3, a boat carrying Eritreans and Somalis capsized off the Italian island of Lampedusa. At least 350 died in the incident.

A Little more than a week later, at least 34 migrants drowned within 50 nautical miles of the island when their boat overturned. Survivors from Friday's shipwreck have claimed that they had been shot at by Libyan military as they departed from the coast. The Libyan prime minister has denied these allegations, but has promised to launch an investigation.

According to the United Nations High Commissioner for Refugees, 32,000 people have arrived in southern Italy and Malta this year alone, around two thirds of whom have filed requests for asylum. Most migrants come from sub-Saharan Africa, but this year an increased number has arrived from Syria and Egypt.