American Peace Activists in Europe: United We Stand | Germany| News and in-depth reporting from Berlin and beyond | DW | 04.07.2003

Hundreds of Americans living in Europe are expected in Berlin for the first congress of a political group born out of recent anti-war protests. Founding member Isabel Cole explains why the movement is important. 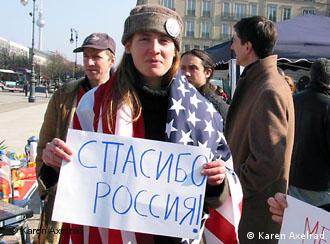 Isabel Cole at a peace demonstration in Berlin earlier this year.

It's mid-afternoon in Berlin and Isabel Cole orders herself a large, cold beer. For Cole, it's quitting time – she has been up since dawn. It has been yet another busy day: hanging up posters, answering emails, talking administration. Isabel Cole is initiator of the peace movement "American Voices Abroad". This weekend -- starting on America's Independence Day July 4 -- its first congress takes place in Berlin.

American Voices Abroad unites U.S. citizens living in Europe in their rejection of the Bush administration's foreign policy. What started off as the protest group "Americans against War" during the conflict in Iraq, now aims "to discuss strategies for opposing these destructive policies" and "to mend international ties which these have put under strain".

For the U.S. presidential election, which goes into full swing early next year, the group is currently preparing a voting bloc initiative. "We want to show that not all Americans stand behind the current government,“ Cole told Deutsche Welle.

When Cole talks about America, the emotions change in her face like clouds on a windy spring day. She speaks of pride, on seeing New York after a long period of absence, of anger, when she watches George W. Bush on television, of frustration when she reads about the ongoing situation in Iraq.

It was all of those emotions which eventually propelled the quiet 30-year-old to "take action“ and put up hand-written flyers in Berlin’s universities, looking for like-minded Americans and calling for them to unite against their government. "I couldn't bear thinking anymore, why doesn’t anyone do anything?" Cole says, referring to Bush‘s foreign policies and in particular U.S. action in Iraq. 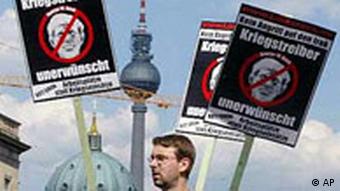 Standing amidst the huge crowds at this spring’s anti-war demonstrations in Germany, she felt more alone than ever. "I thought how much stronger the protest would be if the many protest groups had one voice," Cole said.

American Voices Abroad sees itself as the roof over an array of various groups and organizations in Europe. It has hundreds of members in several countries, 400 in Paris alone and 150 in Berlin.

From groups like "Americans against war in Munich" and "Peace Movement Prague" to numerous individuals, all members have one thing in common: Their nationality. "Since having joined the organization I think a lot more about what it means to be American," Cole said. And that, she admitted, is not always easy these days.

Americans are fat, Americans are stupid, Americans want to rule the world: Since the Iraq war, the list of prejudices and reproaches -- unfounded or not -- against America is long. When Cole’s parents visited their daughter two months ago, they made sure the peace sign on their jacket lapels was obviously visible, such was their fear of being made accountable for what was going on in Iraq and for the politics of the American government -- and not the American people.

"We want to close the gap which opened up between Europe and the U.S. during the Iraq conflict," Cole said. Accordingly, Germans and others are just as welcome to the movement's congress as Americans.

Hundreds of U.S. citizens living in Europe are expected at the conference - for Cole, it is the first time that she has ever organized anything like it before. But not only has she had to carry the burden of responsibility for an initiative which has taken on dimensions way beyond her imagination. She has also gotten to know, and has made friends with many people she would otherwise never have conversed with before.

"In a way, I always avoided going out with Americans," Cole says, adding that most of her friends in Berlin, where she has been living for eight years, are German. This was, until spring this year the case. "The movement has really changed my life."

Back to the founding fathers

After the congress Cole hopes things will quiet down a little. She would like to concentrate on her "proper" job, her work as a translator. She sees herself as less a peace activist and more as a person who would like to foster and promote intercultural dialogue. At the bottom of each email she writes, it says "she goes not out in search of monsters to destroy," taken from a famous speech made by John Quincy Adams –America’s sixth president - on Independence Day.

"I am sure that the founding fathers did not envision a place that throws its weight around in the world," Cole says, explaining her fondness for the quotation.

Can Americans in Europe make a difference? Cole laughs. "Well, it may not change the world. But it can definitely change something in people’s lives, if not least due to the feeling of community." And when the presidential election is over – what happens then? Even if the White House has an occupant more amenable to Cole, a move back to the States appears unlikely: "I have just received my unlimited residence permit!"

After thousands flocked to Florence, Italy, for the country’s largest anti-war demonstration on Saturday, organizers of the European Social Forum said they would plan a series of Europe-wide protests against an Iraq war. (November 10, 2002)

Americans in Berlin Protest for Peace

A group of Americans living in Berlin is agitating for a peaceful solution to the Iraq crisis. Recalling an American tradition, they will spend two days stalling for time by talking, singing and exorcising evil spirits. (March 14, 2003)

Traditional Easter marches are kicking off in cities across Germany under the motto, “Human rights instead of bombs.” Organizers hope that the urgency lent by the Iraq war will draw more pacifists than in recent years. (April 18, 2003)