Large Turnout Expected for Easter Marches in Germany | Germany| News and in-depth reporting from Berlin and beyond | DW | 18.04.2003

Traditional Easter marches are kicking off in cities across Germany under the motto, “Human rights instead of bombs.” Organizers hope that the urgency lent by the Iraq war will draw more pacifists than in recent years. 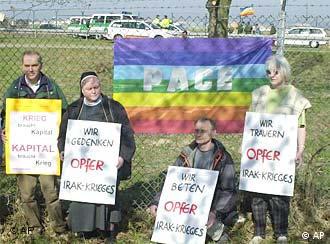 Good Friday protests -- members of "monks for peace" demonstrate against the war in Iraq at the Rhein-Main Air Base in Frankfurt.

Germany, which amply demonstrated its strong pacifist stance in the recent U.S-led war against Iraq, is gearing up for a series of demonstrations and church services to reinforce the message of peace over the Easter holidays. Rallies are expected to take place in over 100 German cities from Good Friday through to Easter Monday.

The denunciation of the war against Iraq is to take center stage in this year’s Easter marches in Germany, a tradition since 1960.

A speaker for the Federal German Information Center on Easter marches in Frankfurt, Willi van Ooyenm, told the news agency Associated Press that America’s violation of human rights with its war against Iraq should not be allowed to set a precedent for further U.S.-led wars.

He said that Easter protestors will also refuse a dominant role for the victors in the postwar rehabilitation of Iraq and demand a political strengthening of the United Nations. On the domestic level, the Easter marchers are also calling for an end to the rearmament and restructuring of the German army to turn it into an intervention force.

Though the organizers of the Easter marches -- a clutch of various independent groups strewn across Germany -- were basically satisfied with Chancellor Schröder’s tough anti-war stance during the Iraq war, van Ooyen said that some criticism is bound to erupt during the four days of demonstrations.

"The German government is actually in the process of putting together a European military force as a counterweight to American military might. And that’s a big danger, that the peace movement has always focused on: that war as a means of politics is really ineffectual to sensibly shape peaceful coexistence," he told DW-RADIO.

This idea is thought to be the origin of the first Easter marches, which started in Great Britain under the guidance of philosopher Bertrand Russell over Easter in 1958.

By the end of the 1960s, the ranks of Easter demonstrators in West Germany had swelled to about 150,000 people, with angry protests motivated by the Vietnam war. Over the years the marches evolved into a gathering point for various political leanings and convictions.

The German Communist Party (DKP), sponsored by communist East Germany, also played a dominant role in the marches, though it soon came in for strong criticism as its influence over the event grew. Things came to a head in 1968 after Warsaw Pact forces brutally crushed the Prague Spring reform movement in communist Czechoslovakia. For a while Easter marches in Germany came to a standstill.

More than a decade later Easter marches were revived in West Germany. The impetus was provided by the controversial NATO two-track decision to deploy Pershing II and ground launched cruise missiles in the country to counter Soviet-deployed SS-20 missiles in Eastern Europe that could reach targets in Western Europe.

Thousands of people took to the streets in West Germany to protest against a potential nuclear arms race. Both the German anti-war movement and the traditional Easter peace marches thrived.

Fewer people on the streets at Easter

After that momentous peak, the number of participants in Easter marches has fallen steadily since the early 1990s. From some 100,000 demonstrators in 1991 after the Gulf War, the number of peaceniks and pacifists has dwindled to about 10,000. Organizers blamed the decrease on fundamental changes in the political situation and the waning fear of a nuclear threat.

German participation in the Kosovo war in 1999 saw a brief increase rise in the number of Easter marchers, estimated at about 50,000.

Organizers are hoping that this year will attract large numbers too owing to the fresh U.S.-led offensive against Iraq, which has drawn strong condemnation worldwide.

But not everybody thinks so. Kristian Gollo of the peace organization Netzwerk Friedenskooperative told DW-RADIO the "people have to an extent been demonstrating since October." "The batteries will be empty sometime."

As Berlin prepares to host one of the biggest anti-war rallies in Germany of the past two decades, DW-WORLD takes a look behind the scenes of the groups organizing Saturday's protest. (Feb 14, 2003)