Americans in Berlin Protest for Peace | News and current affairs from Germany and around the world | DW | 14.03.2003

Americans in Berlin Protest for Peace

A group of Americans living in Berlin is agitating for a peaceful solution to the Iraq crisis. Recalling an American tradition, they will spend two days stalling for time by talking, singing and exorcising evil spirits. 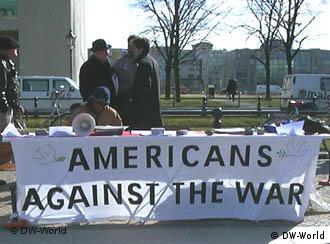 48 hours of song, dance and talk for peace

After days of rain, the sun struggled out on Thursday morning and shone over a small group of people gathered on the Pariser Platz in front of the historic Brandenburg Gate in the German capital.

It doesn't take much to figure out who they are: a banner emblazoned with the words "Vietnam Veterans against the War," and a table draped with another that says "Americans against the War" almost tell the whole story.

The action begins with a sound check intoning the U.S. Declaration of Independence: “Test, test... We hold these truths to be self-evident that all men are created equal ... test, test.” The group, which is calling itself Americans in Berlin against the War, begins its 48-hour "filibuster for peace" by unfurling a banner with the words "American Peace Embassy" in front of the plot of land that will house the U.S.' future diplomatic headquarters in Berlin.

The group's members -- a mix of academics, artists, translators and other expats -- have two things in common: They are American and they are against a war in Iraq. Similar events are being staged by expatriate Americans across Europe this week in cities like Amsterdam, London and Paris.

“The German media very much under-represent the American anti-war sentiment,” Isabel Cole, the main organizer behind the filibuster for peace, told DW-WORLD. “We want to bring across the point that this is not about Germany against America."

"There are many Americans who are opposed to the war and who think this war is precisely un-American," she said. "And we want the Germans to understand that. Because there are some opinions in Germany that criticize German opponents of the war as un-American. We want to provide a counter-balance to that and tell them that no, on the contrary, we need them, as old friends of America, to help us out of this mess that we’ve gotten ourselves into.”

Cole, a translator who has lived in Berlin for over seven years, established the loose-knit group in February. Inspired by Berlin's weekly Monday demonstration meetings, Cole sought out other Americans in Berlin who shared her anti-war stance. She said she was relieved to find that she wasn't the only American who found herself siding with Germany's anti-war stance.

Cole managed to organize around 30 of her countrymen and women to take part as a bloc in the Feb. 15 anti-war demonstration that attracted close to 600,000 people in Berlin. There, Cole learned of another group of Americans that had been formed. The two groups merged and membership swelled to 80 people.

The group has become a regular fixture at the Monday demonstrations, and last Saturday it held a vigil on the central Kurfürstendamm shopping boulevard. It was there that the idea for the two-day protest took shape.

“We thought it would be a good idea to have a filibuster where everyone can say their piece,” Cole explains.

A filibuster is an odd feature of the American political system by which a senator can obstruct passage of legislation by using up the Senate’s time making long speeches. Under congressional rules, a chamber can't vote on legislation until all members have said everything they want to about the issue.

“The longest filibuster in history was 1001 Nights,” Cole tells the assembled crowd.

But unlike the rambling speeches that usually characterize filibusters in U.S. political institutions, ABAW’s took a more cultural approach -- with speeches, readings, singing and even poetry. 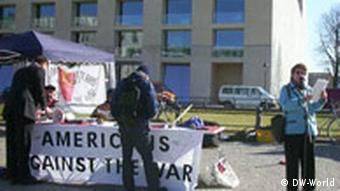 Expounding on men and war

One man belted out a song he wrote called “Gulf War Syndrome.” A Vietnam veteran rapped his anti-war message. A playwright read one of her scripts and then recites a Bob Dylan song. A French academic explained why the French are against a war, and a British-Austrian author expounded on the relationship between man and war.

On Friday night, other Americans against the war will hold an exorcism of war spirits from their place next to the future U.S. embassy.

"We're doing what we can to try and save our democracy," said David MacBryde, an American expat living in Berlin since 1981 who planned to participate in the filibuster.

As Berlin prepares to host one of the biggest anti-war rallies in Germany of the past two decades, DW-WORLD takes a look behind the scenes of the groups organizing Saturday's protest. (Feb. 14, 2003)

Taking It To The Streets

Germans have been demonstrating for the cause of peace since long before a U.S.-led war began to loom over Iraq. Kristian Golla of Bonn reflects on his two decades in the movement. (Feb. 14, 2003)

More than six million take to the streets from New Zealand to Syria to protest U.S. plans for a war against Iraq. In Berlin, a 600,000 strong protest is also attended by government ministers. (Feb. 16, 2003)

Americans in Berlin against the War