After thousands flocked to Florence, Italy, for the country’s largest anti-war demonstration on Saturday, organizers of the European Social Forum said they would plan a series of Europe-wide protests against an Iraq war. 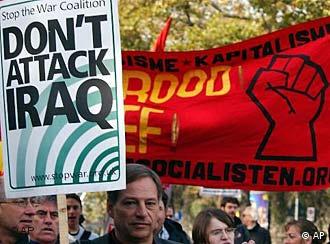 Half a million protested in Florence against a war on Iraq

Hundreds of thousands of peace activists and anti-globalization demonstrators gathered in Florence on Saturday to take part in one of the biggest anti-war marches Italy has ever seen. The city’s historic downtown center was transformed into a sea of balloons and banners protesting the prospect of U.S.-led military action against Iraq.

The peace rally, which was billed as the climax of the five-day European Social Forum, brought together people from across Europe in a massive show of support for a peaceful solution to the Iraq conflict. Germany’s Hans-Christian Ströbele, member of parliament and the Green Party’s most vocal peace activist, was in Florence for the forum’s series of workshops and seminars under the motto "a new Europe for a different world."

Ströbele told DW-TV that the half-a-million strong march on Saturday reflected a "combination of the anti-globalization movement and a new movement for peace." He said "the hundreds of thousands of young people from all over Europe are sending out a clear message to all governments, including the German government, not to go along with these plans [for a war on Iraq]."

A French spokesman for the anti-globalization network Attac, which helped organize the forum, told reporters that it planned to stage protest days in mid-December and January. These demonstrations would lead up to a European-wide anti-Iraq-war protest on February 15th.

"Our European network has agreed to organize on February 15 a European day – if possible international beginning with European capitals – to oppose the war in Iraq," Christophe Aguiton told AP wire reporters in Florence.

Germany’s Attac network is also working to organize upcoming demonstrations against a possible war in Iraq. Jan Siefers told DW-RADIO that Germany had a special role to play in peace rallies.

"The German peace movement is a little behind the other peace movements and must become much stronger," he said. "Germany now has a special role primarily because attention is focused on Germany after [anti-war] statements made by [Chancellor Gerhard] Schröder. That means we must put on a large demonstration in December and then work together with other peace movements to prepare the European anti-war-day in February."

In late September, peace activists in Washington and other world capitals staged protests against the U.S. government’s stance on Iraq, but the largest of the demonstrations – in London and Rome – only drew about 100,000 people each. The estimated 500,000 who attended the march in Florence was the biggest turnout for an anti-war protest yet.