American investor Warren Buffett sets his eyes on India′s fintech market | Asia | An in-depth look at news from across the continent | DW | 04.09.2018

US business magnate Warren Buffett has made a surprise entry into India's digital payment market, with his Berkshire Hathaway reportedly injecting some $360 million into Paytm, India's largest digital payments platform. 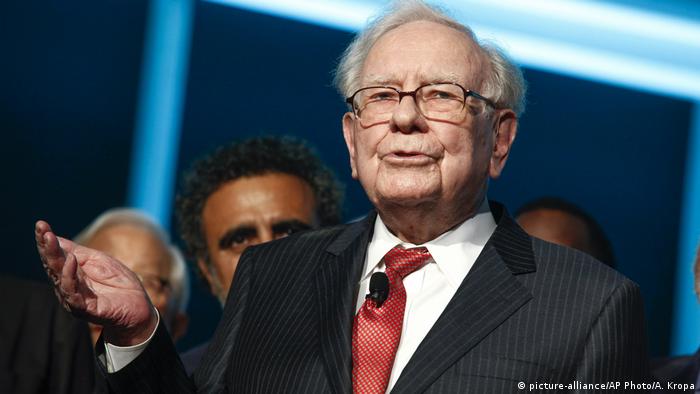 Warren Buffett's investment would not only give Berkshire Hathaway a three to four percent stake in One97 Communications Ltd, the parent company of Paytm, but also allow one of Buffett's close aides, Todd Combs, to join the board.

Buffett, nicknamed the "Oracle of Omaha," is considered to be one of the most successful investors and the third-richest person in the world.

Berkshire's investment means the Indian mobile payment company is now valued between $10 billion (€8.65 billion) and $12 billion. It has also allowed Paytm to join a coveted league of companies such as Apple, Coca-Cola, American Express, Walmart and Procter & Gamble — all backed by Berkshire.

"I have been impressed by Paytm and am excited about being a part of its growth story, as it looks to transform payments and financial services in India," said Combs, Berkshire's investment manager.

"Berkshire's experience in financial services and long-term investment horizon is going to be a huge advantage in Paytm's journey of bringing 500 million Indians to the mainstream economy through financial inclusion," Vijay Shekar Sharma, CEO and founder of the Indian firm, said in a press statement.

When contacted by DW, Paytm officials refused to divulge the exact amount of Berkshire's investment in the company.

Buffett's investment in Paytm marks Berkshire's first formal foray into an attractive Indian market. The 87-year-old billionaire has been generally reluctant to invest in internet firms but India's rapidly growing digital payments market, which will be worth $1 trillion by 2023 from the current value of $200 billion, according to Credit Suisse, is hard to ignore. Also, Paytm holds a near-monopoly status in the crowded digital payments sector in India despite the presence of Google Pay, Amazon Pay, state-backed BHIM and local rival PhonePe.

What started just as a payment solution to customers for transactions through money wallets, Paytm now has its own e-commerce market space called Paytm Mall.

"This [Buffett's investment] shows the international confidence in the future of digital payments in India, which are certainly growing," DD Mishra, a research director at Gartner, a global financial advisory firm, told DW.

"The market is evolving rapidly. Investors want to be part of this journey and rake in the benefits," Mishra added.

Paytm is one of the few incidental beneficiaries of Prime Minister Narendra Modi's 2016 demonetization drive. In a year since demonetization, Paytm's users have grown from 125 million to 280 million.

Although a vast majority of transactions in India — nearly 70 percent by value, according to Credit Suisse — still takes place through cash, digital payments have also seen a massive growth in the past few years.

"In the fintech (financial technology) market, the intersection between payment and e-commerce is clearly one business area that attracts a lot of attention," Vivek Belgavi, a fintech expert with the PwC firm, told DW, adding that the present fintech scenario indicates that the market is moving toward more consolidation.

Read more: Show me the money: India staring at a cash crunch

Belgavi underlined that although the Indian fintech market is highly competitive, there are still many untapped opportunities for global players.

"The different parts of the economy are fairly interconnected. As parts of the economy get formalized, fintech players or broader financial services players will have a way to access a segment and a number of government-led initiatives that also dovetail into the market," Belgavi said, adding that the incumbent Indian government is digital-friendly.

Peter Bendor-Samuel, the CEO of the management consultancy and research firm Everest Group, is of the view that more than Berkshire's financial capital, other factors such as Buffett's global connections and the company's expertise in the business would be even more beneficial for Paytm.

"It doesn't get any smarter than this," Bendor-Samuel told DW. "The connections and the board that they've assembled would go a long way for Paytm," he added.

"In the area of financial technology, companies don't exist in isolation, hence connections are important. So when Warren Buffett gives you a call, you listen," said Bendor-Samual.