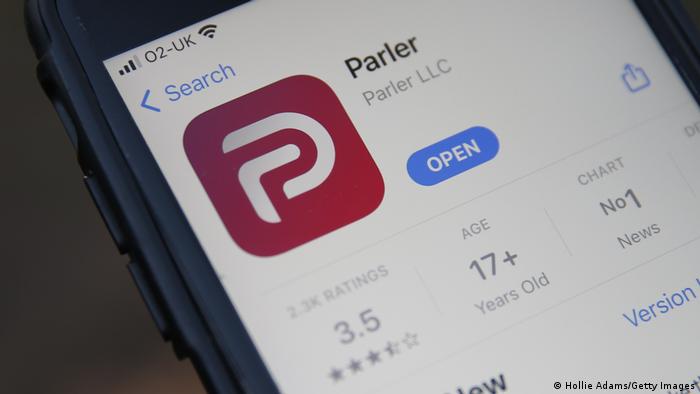 Parler is facing eviction from more and more tech platforms

Amazon has become the latest tech giant to clamp down on microblogging and social network service Parler, notifying it of plans to suspend its web hosting service on Sunday.

The suspension will come into effect on Sunday, at 11:59 p.m. PST (0759 UTC Monday). It effectively takes the service offline unless it can find a new company to host its services.

Parler is seen as a haven for people banned or censored by other social media platforms, including right-wing extremists.

Users took to the platform to coordinate the storming of the Capitol buildings in Washington D.C.last Wednesday.

The move follows Apple Inc and Google banning Parler from their app stores on Saturday.

Why are Amazon, Apple, Google targeting the app?

In a letter to Parler first published by Buzzfeed, Amazon told Parler it was suspending its Amazon Web Services (AWS) because it was not acting quickly enough against violent content on the platform.

"We've seen a steady increase in this violent content on your website, all of which violates our terms of service," the letter stated – the contents of which were confirmed to news agencies by Amazon.

Apple Inc accused Parler of not taking "adequate measures to address the proliferation of these threats to people's safety," in a statement, pointing to participants' using the service to coordinate Wednesday's siege of the US Capitol.

It has suspended Parler from the App Store until the platform resolves these issues.

Apple had given Parler 24 hours to submit a detailed moderation plan.

Google pulled Parler from its app store for allowing "egregious content" that could incite deadly violence like that seen at the Capitol.

Parler Chief Executive John Matze lashed out at the moves by Amazon, Google and Apple.

"There is the possibility Parler will be unavailable on internet for up to a week as we rebuild from scratch," he said in a post on Parler.

"This was a coordinated attack by the tech giants to kill competition in the market place... You can expect the war on competition and free speech to continue, but don't count us out."

Parler was suspended by the major tech companies, afterTwitter permanently suspended US President Donald Trump's accounton Friday for his role in inciting violence at the Capitol.

Trump responded, saying he will look at building his own social media platform.