′Alliance between banks and governments at the heart of eurozone crisis′ | Transatlantic Voices | DW | 16.12.2011

The 'monstrous irresponsibility' of European banks contributed to the current euro crisis, says Edmund Phelps. But at its core lies a fatal collusion between governments and banks, argues the Nobel Winner in Economics. 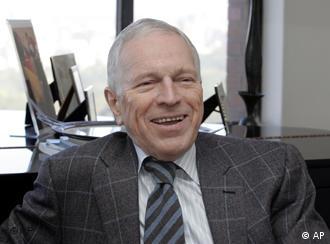 Banks can't be allowed to calculate their own risks, says Phelps

Edmund S. Phelps is the 2006 winner of the Nobel Prize for Economics. Phelps is McVickar Professor of Political Economy at Columbia University in New York and Director of Columbia's Center on Capitalism and Society.

Deutsche Welle: There has been criticism of last week's EU summit that it didn't address the immediate crisis enough. And that under the leadership of German Chancellor Merkel European leaders didn't allow the European Central Bank to act as a lender of last resort, didn't implement eurobonds or grant a banking license for the stability mechanism. Many say that the crisis can be only be solved by implementing some or all of those measures. Do you agree?

Edmund Phelps: I guess I was a little surprised that there wasn't more attention paid to the immediate crisis. But the explanation I suppose is that the leaders had not yet reached an adequate agreement as to how to proceed with the immediate crisis. And we are still wondering whether the European Central Bank (ECB) is going to be empowered to buy up a whole boatload of Greek debt and I suppose the willingness of the ECB to do so is another element in the equation. I think there is still some uncertainty about how much money the IMF would be able to bring to this task.

It may take a month or even several months before a full agreement is reached how to deal with the Greek problem. Of course the problem is that meanwhile the clock is ticking and Italy is exposed to a speculative attack on Italian bonds. So Europe is in very dangerous territory at the present time.

With the clock ticking for Greece and Italy, but also for Spain and Portugal which are also seen as increasingly shaky creditors by the markets, how do you assess their ability to acquire loans at affordable rates going into 2012?

The Italians I talk to are very optimistic that this can be done. But of course if participants in the bond market decide that it can't be done then they are going to be unwilling to lend to Italy even at very elevated interest rates. The higher the interest rates the Italian government is willing to offer the more nervous the bond buyers will be. So it is a possibility that there could be breakdown of Italy's ability to roll over its public debt and move forward.

What is your sense then of the eurozone? Will it continue to exist in its current form with all 17 members or do expect that Greece or others might drop out?

I think we have to entertain the possibility that Greece will want to drop out and the possibility that the other members of the eurozone would push Greece out. That could help the euro as a currency. It wouldn't help the solvency of the European banks. I find it very hard to imagine that the eurozone as a monetary zone would close down. All the countries in the eurozone have benefitted from the arrangement, so I think there will be determined effort by all concerned to reach an agreement that will preserve the euro.

Britain has chosen to go it alone and not join the planned stability union. Is that smart move in your opinion?

It's understandable that the British didn't want to put themselves in a position where they would be forced to hand out big bailouts to Greece, Italy and Spain and others.

But that decision is now being criticized by people who say that Britain now won't be part of the discussions about reforming the fiscal, monetary and financial system. And Britain is very dependent on the eurozone countries and the way the eurozone works. While it fled the scene because of the risks it saw, it may have jumped from the frying pan into the fire.

If Chancellor Merkel, widely regarded as the central figure in solving the euro crisis, were to ask you for your economic advice how to solve this crisis what would you tell her?

I think she is proceeding in a way that looks to be the right way for Germany. I think what she wants to do is nail down a reconstruction of the eurozone so that the Greek behavior can never be repeated. If she can get agreement on that then maybe she can get support of the German public for a bailout of Greece and everyone can understand as far as we can foresee that this bailout is the last in the eurozone.

But I don't think that right now there would be much support in Germany of jumping ahead in the next weeks and months with a bailout of Greece or even using the ECB for that purpose because there would be feeling that there would be a moral hazard in doing so, because that would only encourage countries to believe that if they are in fiscal difficulties they would be bailed out.

It looks like we are seeing the beginning of a second banking crisis in Europe. France's second-largest bank as well as four other European banks have just been downgraded. Does history repeat itself after all?

And so soon (laughing)? I think even two or three years ago a lot of economists were wondering about the solvency of the French banks. I have to say as an American I find it a little strange that whatever happens in Europe is a problem of the eurozone. What's happened to the national governments? Why isn't the French government ensuring that its banks have a very comfortable margin of solvency. And why didn't they do that two or three years ago?

What does that say about the various international banking stress tests that were conducted in the last couple of years?

I think there was a sizeable opinion among experts that the stress tests of last year were rather loose and not stringent tests. The stress tests were a way of boosting confidence and assuring markets that collapse was not around the corner. But in a way they ended up being costly because governments didn't see the urgency and importance of addressing the balance sheets of the banks.

But aren't the banks at the heart of this whole mess? We wouldn't be worried about Greece if the European banks had not overpurchased Greek debt. If the banks had been more prudent in buying all this sovereign debt the problem could have been solved a long time ago by just giving the bond holders a haircut. The whole trouble is that the bond holders are the banks or at least were until they were trying to divest themselves of bonds in recent weeks. To give a haircut to the banks might bring down the banking system.

I think the political story here is there has been an alliance for mutual gain between the governments and the banks. In this alliance for mutual gain the banks would buy up immense quantities of sovereign debt instead of lending to small businesses for innovation. They were not required to hold any capital against such assets and pressure was no doubt put on the ratings agencies to give all this sovereign debt a triple AAA rating. And this was also great for the governments and lots of governments took advantage that they didn't have to pay as high interest rates as they would otherwise have to pay. And they began borrowing a great deal. I think this alliance between the banks and the governments lies at the heart of the eurozone crisis.

The huge bank bailout just a few years back for those who according to the view of many in the US and Europe were responsible for the crisis in the first place was harshly criticized by the public. How would another massive bank bailout be received and what would this do for people's perception of capitalism?

I certainly agree with the public that the European banks as well as the American banks - but now we are talking about Europe - behaved with monstrous irresponsibility. Going forward, there have to fundamental reforms. Europe has to get back to banks that lend to businesses the way they used to do in the last decades of the 19th century and for some years afterwards. It's no good if the banks don't support the business sector and instead are in bed with the governments. This is corporatism, it's not capitalism.

Maybe we shouldn't have a bailout, because a bailout would just permit them to do what they have been doing.

Are you hopeful that this reform of the financial system which has to take place at least on a European, but preferably a global level, will take place because many people feel that the reforms so far have been mostly cosmetic?

Here in the United States there is a feeling that all these regulations coming out of the Dodd-Frank bill (Wall Street Reform and Consumer Protection Act signed into law in 2010 - the ed.) are going to be evaded by the banks. The banks are largely left to calculate the riskiness of the assets. Can you imagine after showing they don't know the first thing about the risks of assets they are the ones being asked to calculate the risks of the assets that they will have to hold capital against? This is incredible. It's like asking a motorist to calculate his speed before he is given a speeding ticket.

Do you think the Occupy Wall Street movement has run its course?

I think they were quite right to point to the poor performance of the economic system in recent years. Here were the bankers on Wall Street with already very high bonuses again while these young people in Zuccotti Park in the heart of the financial district couldn't get jobs and had almost no income at all. It was a very effective and silent protest. All they had to do was stand there and say look at this contrast between us and them. They didn't have much of an idea what should be done. Unfortunately, I think the occupiers have fallen under the influence of people who want to attack globalization.

I think that the Occupy Wall Street movement has served to heighten people's consciousness that something has to be done to improve the effectiveness of American economy and to address the disparity in opportunity that exists in this country. So many people have lush opportunities for making money, having fun and achieving high positions while a lot of people at the bottom these days seem to have very poor opportunities in the private sector. So I would commend the occupiers for bringing this to the attention of Americans, but probably they have outlived their usefulness and done their job. We have to get busy with reforms of the system.

Last year's Nobel laureate for economics tells Deutsche Welle that Germany must accept that the ECB has to act as a lender of last resort. But Dale Mortensen also supports Berlin's quest for fiscal unity. (09.12.2011)

IMF head Christine Lagarde, speaking in Washington, said the world economic outlook is "quite gloomy" and warned that failure to act collectively could lead to a 1930s-style slump. (16.12.2011)

Merkel calls for a sustainable solution to Europe's problems

German Chancellor Angela Merkel has given a speech to the German parliament explaining the decisions taken at last weekend's EU summit. She sees Germany taking a leadership role in resolving the bloc's debt crisis. (15.12.2011)