Adnan Oktar is one of the most well-known advocates of Islamic creationism and has long been accused by critics of running a sex cult. More than 100 of his followers, including his "kittens," have also been arrested. 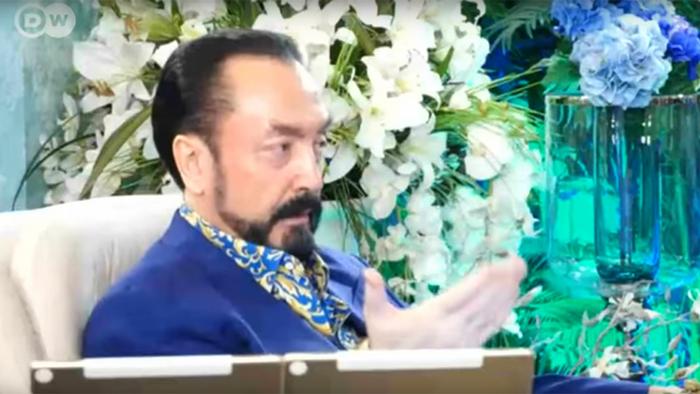 Turkish authorities formally arrested a bizarre Islamic televangelist cult leader and more than 100 of his followers on Thursday for charges including forming a criminal gang, blackmail and sexual abuse of minors, state-run Anatolia Agency reported.

Adnan Oktar, known commonly by his pen name Harun Yahya, was taken into custody last week in multiple raids that also rounded up 235 people. Oktar's property was confiscated in the operation, which yielded guns and ammunition.

Oktar is a self-described Islamic scholar known for wild conspiracy theories and his numerous writings promoting creationism against Darwin's theory of evolution.

When he was arrested last week, he told journalists it was a "game of the British deep state," a reference to one of many of conspiracies he peddles.

Oktar is notorious for appearing on his television program besides scantily-clad women known as "kittens," and has a group of ripped men known as "lions."

In February, Turkey's media watchdog fined Oktar's TV channel and suspended broadcasts after he got into a row with the top Turkish religious body.

Nearly 140 of Oktar's followers have been formally arrested up to this point after 27 more formal arrest orders were issued on Thursday. Many of those arrested have been females.

Turkish media reports in recent days have been full of accounts of the inside workings of the cult from those who escaped.

They have described among other things brainwashing, child sexual abuse, strict control over members and Oktar being married to multiple women.

After prolonging the state of emergency seven times, Ankara finally ended the measure introduced after the 2016 coup attempt. However, the state now aims to keep many emergency powers in place with a new anti-terror law. (19.07.2018)

US Congress and President Trump are outraged over pastor Andrew Brunson's detention in Turkey. US President Donald Trump urged Recep Tayyip Erdogan to "do something" for the clergyman's release on Twitter. (18.07.2018)