Alitalia on the precipice as workers reject rescue plan | Business| Economy and finance news from a German perspective | DW | 25.04.2017

Alitalia on the precipice as workers reject rescue plan

Alitalia workers have rejected a management restructuring plan to cut jobs and salaries, betting that the government will be asked to step in to save the loss-making Italian airline with an alternative plan. 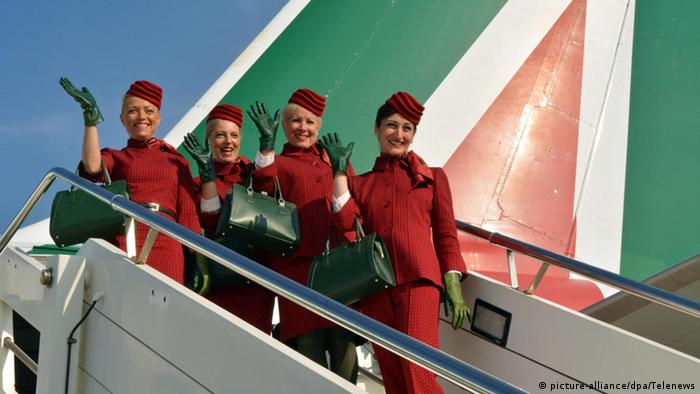 In the vote on Monday, almost 90 percent of the airline's 12,500 employees had participated, with a clear majority of them opposed to management's proposals.

Under the rescue plan, some 1,700 jobs would be cut at the Italian flagship carrier and the remaining staff would have to endure a salary cut by 8 percent.

"The workers' anger won out," said Antonio Piras, general secretary of the Fit-Cisl union, explaining why workers had rejected a plan that had been agreed with unions.

Alitalia - owned 49 percent by Abu Dhabi-based Etihad Airways - has been bailed out repeatedly by Italian governments and private investors, though Rome says it will not renationalize Alitalia if creditors are losing patience.

Etihad and the Italian banks Intesa Sanpaolo and UniCredit have said they would only inject new funds if the unions agree to the new collective labor agreement and cuts.

The Italian government, which acted as a mediator in negotiations, warned on April 18 that a "no" victory would not only be costly but potentially fatal for the company.

Italian press reports said Alitalia directors would meet on Tuesday to ask the state to establish a "special administration" for a possible takeover or liquidation.

The administrator might seek to prepare industrial and financial plans for a rapid revamp of Alitalia, either as a standalone company or through a partial or total sale, or else put it on course for liquidation.

The pressure to find a solution is intense, with the airline's liquidity expected to run out this month without emergency funding, leaving its fleet grounded.

Alitalia said last month it would cut 1 billion euros in costs over three years and revamp its business model for short and medium-haul flights in order to return to profit by the end of 2019.

The carrier also plans to increase flights on higher-margin long-haul routes, but workers have remained skeptical over its plans, given a string of failed restructurings in the past.

After buying into the airline in 2014, Etihad pledged to return it to profit by 2017 but the turnaround faltered in the face of competition from low-cost airlines and high-speed rail services.