The Grand Ayatollah is not only the spiritual leader of Iraqi Shiites, but also an important political figure. Here is a portrait of the man who will receive a visit from Pope Francis in the Iraqi city of Najaf. 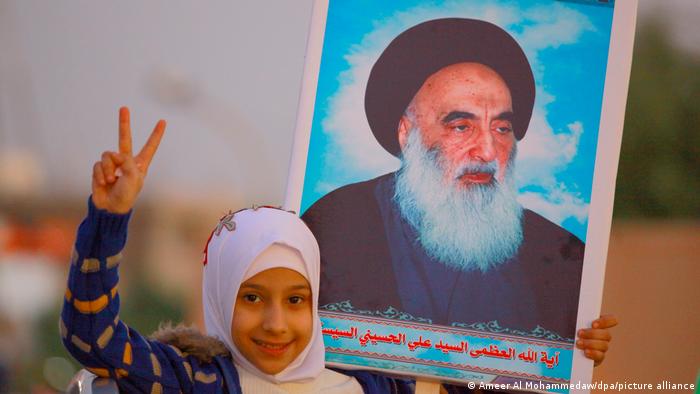 Ali al-Sistani, Iraq's most important Shiite cleric, was born in 1931 in the Iranian city of Mashhad, but in 1951 he moved to Iraq, where he has lived for the past 70 years. He is a highly esteemed theologian, who first headed the famous Hawza (religious seminary) in the Iraqi city of Najaf, and went on to become the Grand Ayatollah, the country's most senior Shiite dignitary. Over the past 20 years, because of the office he holds, he has gradually become one of Iraq's most influential political figures. 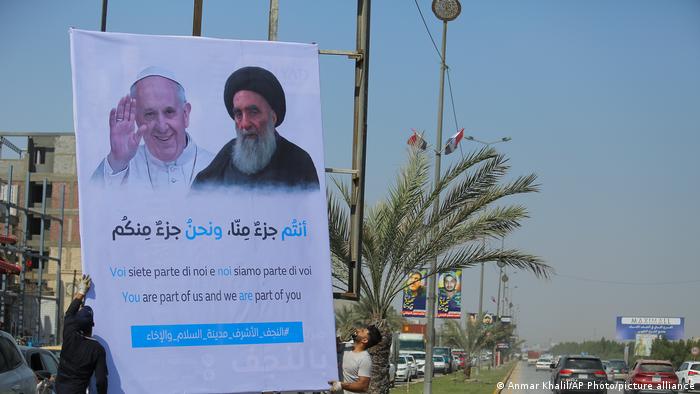 Al-Sistani's involvement in politics was not inevitable. It was not something he sought; rather, he submitted to the requirements of the times. Before this, especially until 2003, when the United States invaded Iraq, he had maintained a low profile — and with good reason. Shiite Muslims constitute the largest denominational group in Iraq, with around 60% of the population, but they were singled out for particular persecution under Saddam Hussein, the ruler of Iraq from 1979 to 2003.

Saddam consolidated his power by systematically playing off Shiite and Sunni Muslims against each other — the dictator himself belonging to the latter group.

Eckart Wörtz, the director of the Institute of Middle East Studies at the GIGA Institute in Hamburg, is a political scientist and scholar of Islam. "Under these circumstances, al-Sistani had hardly expressed himself politically," he explains to DW. "On the one hand, this was consistent with his upbringing: He was born into a traditional Shiite family, and was more committed to a quietist worldview that keeps its distance from politics."

When he came to Iraq, al-Sistani initially maintained this course, especially as he was under house arrest for a long time under Saddam. In doing so, al-Sistani was considering not only his own situation, but that of all Shiite clerics in Iraq, many of whom were persecuted or killed under Saddam's rule. 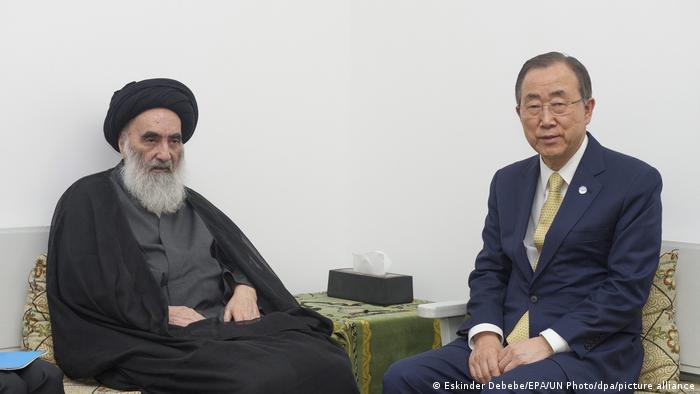 Theologically, al-Sistani represents a conservative Islam. On his website, he discusses religious issues facing devout Muslims in an age of globalization. One example is travel to non-Muslim countries. This is permissible in principle, al-Sistani writes, especially if it serves the purpose of spreading Islam and its teachings — "provided the traveler is able to protect himself and his children against the dangers of losing their faith."

This is also the fundamental line taken by al-Sistani as a theologian: He is definitely in favor of openness to the world — but on the clear condition that it does not lead religious Muslims away from the right path. 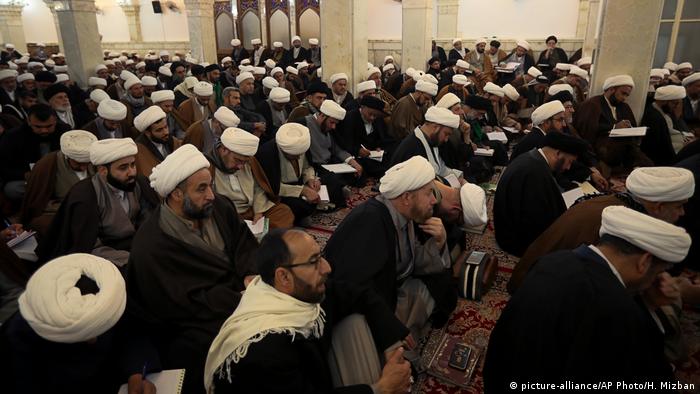 Students during a seminar at the "Hawza" seminary in Najaf, in February 2020

"Thanks to Sistani's tolerance and respect for the freedom of thought and debate, Najaf, as a religious center, is witnessing the most tolerant era in its entire history," political scientists Abbas Kadhim and Barbara Slavin wrote in spring 2020 in a study for the American think-tank Atlantic Council.

However, it is also true that al-Sistani issued a fatwa in 2005 calling for gay people to face the death penalty — a call he retracted in 2011. 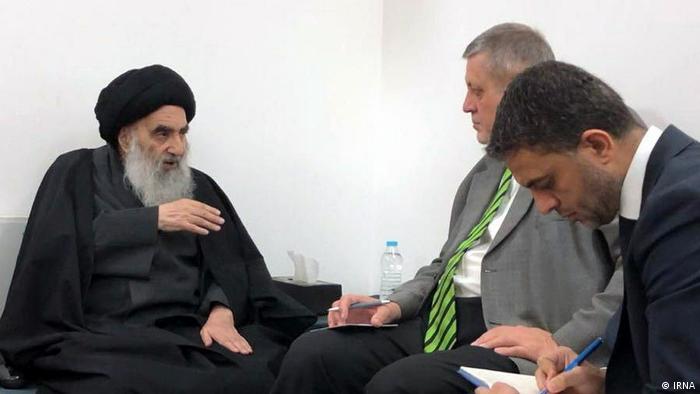 Al-Sistani is fundamentally inclined toward moderate positions. "Politically, he comes across as moderate and pragmatic," says Eckart Woertz. "This is precisely what his reputation and authority are based on."

Al-Sistani first saw a reason to take political action in August 2004. At that time, the forces of influential Shiite leader Muqtada al-Sadr were engaged in fierce fighting with the US military in Najaf. During the conflict, they barricaded themselves inside the Imam Ali Mosque.

When the Iraqi government issued an ultimatum to al-Sadr's troops, al-Sistani had his own followers march outside the mosque. As a result, al-Sadr's troops left the building. Al-Sistani made clear to Iraqi Shiites, even then, that it was unnecessary to fight the Americans. Rather, they could cooperate with them.

"In doing this, al-Sistani contributed significantly to preventing the violence in Iraq from escalating even further," says Woertz. "This commitment earned him considerable respect not only in Iraq, but also in the United States."

He acted even more decisively in June 2014, when he issued a fatwa — strictly limited to the principle of self-defense — against the Sunni jihadi organization calling itself "Islamic State" (IS). Citizens should take up arms and "defend their country, their people, and their holy sites," a spokesman for al-Sistani had explained in the Shiite stronghold of Karbala. 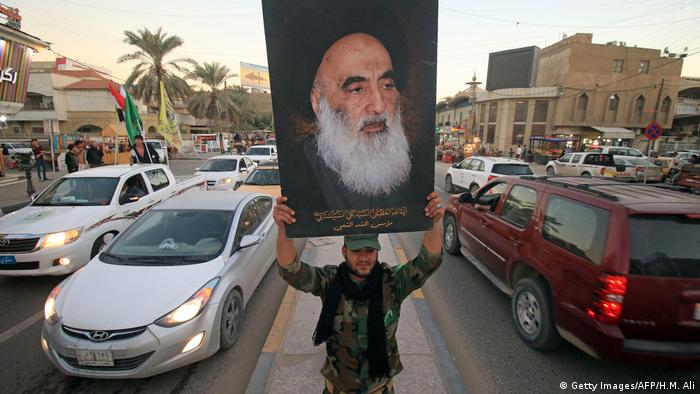 Before tensions: A member of the "Popular Mobilization Units" with a poster of al-Sistani, in Basra, Iraq, in 2017

The force with which the strictly anti-Shiite IS overran Iraq and Syria also caused considerable unease in Tehran — and led to a significant increase in Iranian involvement in neighboring Iraq once more. To influence the political scene in Iraq, Iran had long been supporting Shiite militias there, civilian members of which were also members of parliament in Baghdad.

However, as Iran's influence continued to grow, al-Sistani increasingly put distance between himself and Tehran. In 2014, he initially supported the units of Shiite militias known as the "Popular Mobilization Forces" (PMF) in the fight against IS. However, over the following years he increasingly distanced himself from them, as he felt they stood too much under Iranian influence.

In 2020, he prompted the withdrawal of four major militias from the PMF. At the time, an analysis by the Middle Eastern Internet magazine Al-Monitor described this as "a clear message that Sistani is not content with the pro-Iran organization."

The reaction of the Shiite militias showed just how threatened they were by al-Sistani's stance. The cleric's followers were threatened with death if they did not stop "splitting" the Popular Mobilization Forces still further. 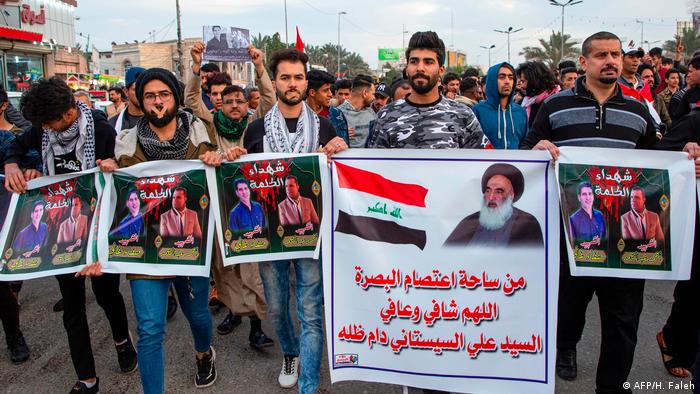 Young Iraqis protest for press freedom after the murder of two journalists (pictured on placards). Grand Ayatollah al-Sistani is also seen on placards

Against corruption and illegal weapons

But the Shiite leader was not intimidated. Last September, he voiced his support for Mustafa al-Kadhimi, the prime minister elected a few months earlier. Like al-Sistani, Al-Kadhimi is also keen for Iraq to be as independent as possible from Iran. In this respect, both men are, in the wider sense, Iraqi patriots and nationalists.

Al-Sistani also called for laws to be enforced, for more to be done to fight corruption, and for illegal weapons to be confiscated. And, without naming names, he condemned all attempts to divide Iraq up into different zones of influence. This was another point that was clearly directed at the militias with links to Iran.

Similarly, al-Sistani has called for an investigation into the bloody crackdown on demonstrations in the fall of 2019. Iraqis from various denominations, most of them young, came out to protest against corruption and an administration they regarded as inefficient, and called for strict independence for Iraq from all external powers. The demonstrators were attacked by militias with ties to Iran. Many of them were killed or abducted.

Eighteen years after the US invasion, Iraq continues to suffer from political instability. Al-Sistani has played a significant role in keeping the country on track. If, at some point, the now 90-year-old should no longer be able to do this, the country will lose a figure who is not only a religious authority — but also a political one.