Algerians will head to the polls to vote for a new president on July 4. It comes after former President Abdelaziz Bouteflika ended his 20-year reign following mass protests. 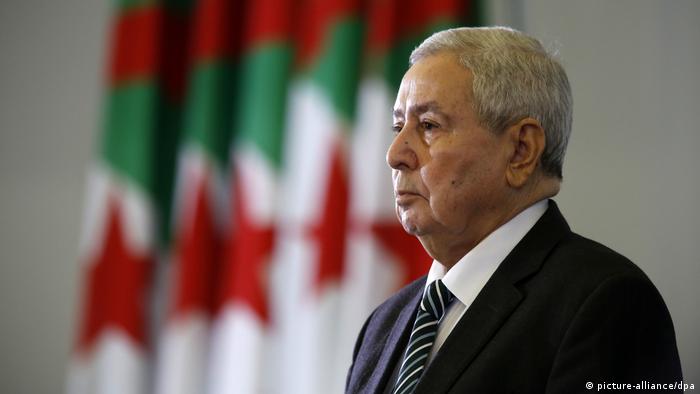 Algeria's newly appointed interim President Abdelkader Bensalah on Wednesday announced the country would head to polls on July 4 to vote for a new president.

Bensalah was appointed president for a three-month transitional period after weeks of mass protests led to the resignation of long-serving leader Abdelaziz Bouteflika on April 2.

Since Bouteflika's resignation, thousands of Algerians have taken to the country's streets, opposing his succession by Bensalah, who they see as a loyalist of the former president.

However, the 77-year-old Bensalah is barred under the constitution from running in the upcoming election.

Most opposition politicians abstained from the parliamentary vote that awarded Bensalah the interim presidency.

'Army will meet the people's demands'

Earlier on Wednesday, Algeria's army chief said he expected to see members of the ruling elite in the major oil and natural gas-producing country prosecuted for corruption and that he would support a transition towards elections.

Lieutenant General Gaid Salah's comments were the strongest sign yet that the military would play its usual role as kingmaker.

"The army will meet the people's demands," said Salah, addressing officers and soldiers at a military base. "The judiciary has recovered its prerogative and can work freely."

"I want to assure you that the transitional period of preparation for presidential elections will be overseen by the army which will stay up for watching this stage in the view of mutual trust ... and in the framework of strict respect for the rules of transparency and integrity," Salah said.

Salah urged the judiciary to reopen a corruption case against oil and gas giant Sonatrach, a company resented by many Algerians who accuse their leaders of stealing the North African nation's wealth.

In 2012, a series of scandals shook Sonatrach, which was tightly controlled by Bouteflika loyalists. Its CEO and other executives were imprisoned for graft offences.

More than one in four people under the age of 30 — some 70% of the population — are unemployed, a  one of the central grievances of protesters who want the economy liberalised and diversified to reduce its reliance on energy.