Algeria are champions of Africa thanks to an early goal and an enormous deflection. As with so many major finals, it wasn't a match to remember. But surely it was a night the Algerian squad will never forget. 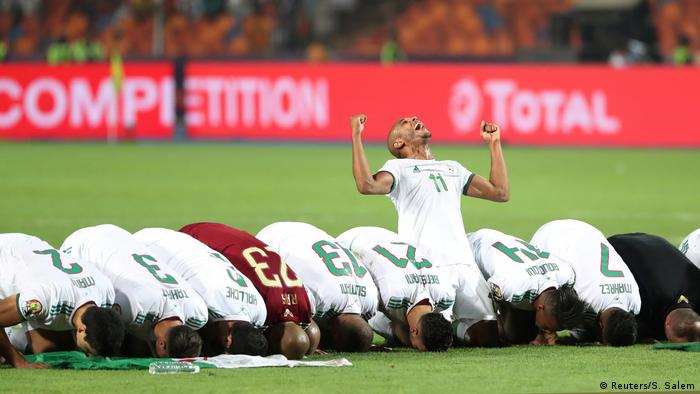 Algeria's first — and only — shot of the entire final came after just over a minute of play. Baghdad Bounedjah's strike looked fairly innocuous and bound for the bottom left corner, until it clattered against Senegal defender Salif Sane. The deflection off Sane could scarcely have been more cruel. The ball looped up and over Senegal's goalkeeper and came back down again just in time to nestle in the opposite corner of the net.

Schalke's Sane was starting his first match of the entire tournament, deputizing for suspended star defender Kalidou Koulibaly. It was the only goal Senegal conceded in the entire knockout phase.

For Algeria, a team lauded for some fine football en route to the final, the early goal did untold damage to their game. They never seriously threatened Senegal's goal again, and committed more than 30 fouls in a rough and not-so-refined final. 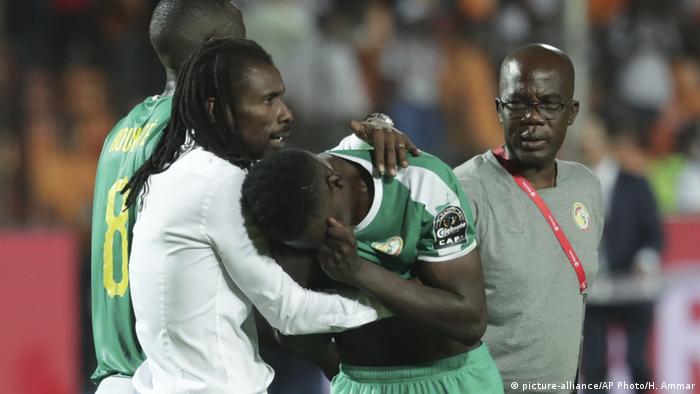 Coach Aliou Cisse consoles Ismaila Sarr, one of the Senegal players to have had a decent chance to level the score late in the game

Senegal carved out several chances for an equalizer, but none that were clear-cut. Striker M'Baye Niang came closest in the 38th minute with a superbly struck left-footed volley from range which went just millimeters over the crossbar. Niang would also round the goalie only to fire off target from a tight angle later in the second half.

Senegal's potentially best chance to draw level never materialized. After around an hour, they were briefly awarded a penalty for handball when a cross from the right was blocked by a defender. However, the call appeared borderline at best, with Adlene Guedioura's arm down by his side as the ball struck it. The call went to VAR for a video review, and the ref's initial penalty verdict was overturned. 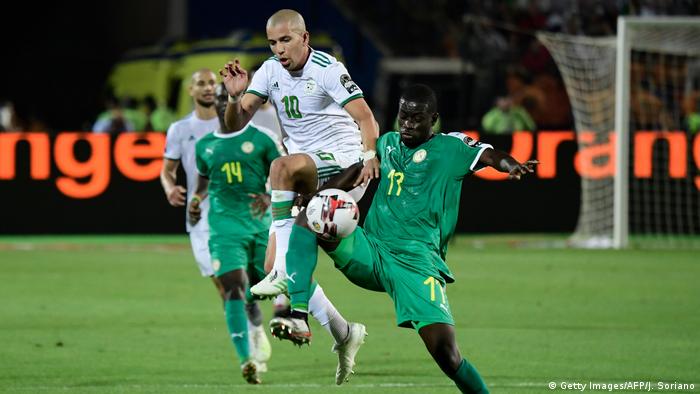 The match was a tense and hard-fought affair, but hardly a thriller for the neutrals

90+4' Salif Sane, the unlucky soul with the deflected goal, drives the free kick into the wall. And the ref immediately calls full time!

90+4' One last free kick. This one might be in shooting range. A flagrant and unnecessary handball conceded it.

90+3' Another set piece goes begging for Senegal. A better delivery than the last attempts, but M'Bohli gets his gloves on the loose ball and clears the danger.

90' Senegal are camped in Algeria's half as desperation sets in. But a series of free kicks have been wasted with poor attempted deliveries into the box. There will be four additional minutes before it's all over.

83' Sarr fires a volley high over the Algerian crossbar from around 15 meters out. Difficult shot to take first time, but still a decent look at goal.

81' Algeria are still yet to dip into their bench, though there's activity there now.

74' Another political protest in the stands in a highly divided Egypt. Fans light up their smartphones in unison, in tribute to the 74 people killed in the Port Said stadium riot in 2012.

74' Head-on-head collision between Mane and Benlamri. Benlamri comes off much worse and has a nasty bleeding wound.

69' Long-range shot from Mane forces M'Bohli into a sharp save at the near post. He might have been playing for the cameras just a little though with a flashy dive and punch over the bar.

68' Sound the Riyadh Mahrez claxon! We just spied him, committing a minor foul in midfield.

67' Cameras cut to a familiar face, Franck Ribery, in the crowd. His wife is Wahiba Algerian.

66' Another big chance for Senegal's Niang! Breaking clear on the right, he takes the ball past the keeper, but the angle's too tight for the finish. In hindsight, looking for Mane in the middle might have been the better option — but time was very short.

61' Hold up, folks. We're checking in with VAR to see if there is a penalty at all.

60' Penalty for Senegal! Handball for blocking a cross, with the defenders arms down by his side. Can Mane make up for his misses earlier in the tournament? He's missed two for three, while Saivet also missed one. Will Mane even take it?

58' Chance for Sadio Mane! He picks up the ball in the box and fires with his left. The shot's well blocked by the last man in the box. Mane's left boot, which made a bid for freedom as he shot, ended up closer to the goal than the ball.

46' The second half begins.

HT analysis: Traditionally, the 0-0 scoreline is the curse of these often tense AfCON finals, and a common result after 90 minutes. And yet curiously, the early goal doesn't seem to have done tonight's match very much good at all. Algeria's attacking game has been all but absent since taking the lead — the goal was their only shot so far — while Senegal have only managed to create five shots with more than 60% of possession. M'Baye Niang's volley was the standout moment besides that cruel early opener. Just a couple of centimeters lower, and he would have been celebrating possibly the best and the most important goal of his career. It's also been quite a rambunctious affair on both sides, but we go into the break with just one player on a yellow card.

45' Confusion over a potential VAR review. At first it appeared that a corner would be reviewed for a possible penalty. But the decision stands: just a corner for Senegal.

42' The question "where's Mahrez?" has been asked more than once in the office. We're reliably informed that he is on the pitch, all evidence to the contrary.

38' What a strike from M'Baye Niang! Senegal's number 9 rifles a left-footed volley towards the top corner from long range. Replays show that it could scarcely have been closer.

36' Key players Sadio Mane and Sofiane Feghouli engage in an immaturity contest before a corner. First Mane needlessly jabs at Feghouli's torso with his forearm, then Feghouli realizes what's happened and drops to the ground like he's been shot, presumably hoping to cause trouble for Mane. Behave, please, children.

33' The tackles are flying in thick, fast and hard at the moment. Ramy Bensebaini booked for a very tough challenge.

31' Senegal's Kouyate is on the ground after a nasty collision in the middle of the park.

25' Algerian fans in a show of political solidarity with the Egyptian crowd — if not the authorities — as they shout out "Allahu akbar, Aboutrika" in acknowledgement of superstar Egyptian striker Mohamed Aboutrika. He's now living in exile in Qatar, because of his ties to the Muslim Brotherhood, an organization that has been rendered illegal once again by the military government after its brief stint in elected office in Egypt.

Observers in the stadium suggest that some who chanted this in earshot of the wrong people are being ushered out of the ground.

23' Just one shot for each side, half way through the first half. Senegal have had a little more of the ball, but the possession margins remain fine. A rather low pass success rate (68%) stands out for Algeria, a team that has played attractive football for the most part at this competition. The early goal might even be affecting their rhythm.

12' DW's African football expert Ali Farhat is singing the praises of the creator of the opening goal Ismael Bennacer in our offices. Already voted man of the match twice in the competition, the 21-year-old Empoli midfielder has played a huge role in his country's success.

10' Both sides have settled after that improbable opener. Senegal do appear to have regained their composure and have built a few promising moves. But Algeria's keeper Rais M'Bolhi has only had crosses to handle thus far.

2' GOAL! Algeria lead, and in the most unusual and early fashion.
Baghdad Bounedjah will go down as the scorer. But his shot took a huge deflection off Salif Sane of Schalke, starting his first match of the competition to replace suspended Senegal star Kalidou Koulibaly. The ball looped high into the air, over the keeper and landed in the net. Very little either defender or goalkeeper could have done there.

It's a candidate for the quickest ever goal in an AfCON final, but in 1980 Segun Odegbami also scored in the second minute for Nigeria — against Algeria no less. Egypt's Ad-Diba bagged a second-minute goal in the 1957 final as well. 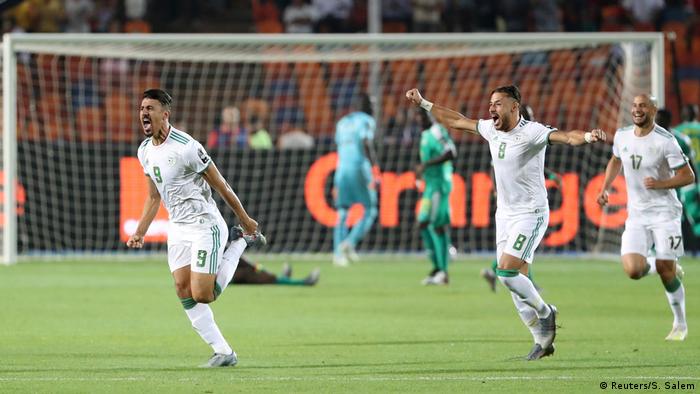 — Players in the tunnel, about to take to the pitch for the anthems. It's (very nearly) showtime.

— The closing ceremony is in full flow, with some impressive pyramids and pyrotechnics on show in Cairo:

— The team sheets are out:

On the Sengal side, the yellow-card suspension for key defender Kalidou Koulibaly is a major blow. Schalke's Salif Sane will start for the first time in the entire competition in the final.

— A crazy fact or two ahead of tonight. Senegal's head coach Aliou Cisse and Algeria's head coach Djamel Belmadi played against each other in youth competitions in a small town outside of Paris years ago. Both played for clubs in England, and both grew up in Champigny. Now, they both have a chance to win it all. Quite the story.

— Kick off is still over an hour away, but the atmosphere is already electric. Imagine what it's going to be like when a team scores!

— It seems that those organizing the event in Cairo tonight, might have underestimated the number of Algeria fans making their way to the stadium.

— A reminder that Senegal will be without star defender Kalidou Koulibaly after the Napoli man was booked in the semifinals, suspending him from the final. That's a huge boost to Algeria's chances, and something that will ultimately put even more pressure on Sadio Mane's shoulders.

— Here's a look at how both teams got here, with Algeria's run looking perhaps a bit more convincing, especially as it includes a win over Senegal. That being said, Senegal marched all the way to the final without conceding in the knockouts, winning each game by just the one goal.

— The time has finally arrived. Will Riyad Mahrez's Algeria claim their first title in nearly 20 years, or will Sadio Mane help Senegal lift their first ever Africa Cup of Nations, banishing the demons of the 2002 final defeat. Cairo is packed full of fans from both nations, both dreaming of what might be later on this evening.

Calls for equal pay have increased after South Africa won their first Women's Africa Cup of Nations title in Morocco. The victory comes after years of planning and investing in the game.

Nigeria are once again favored to win the Africa Cup of Nations. But with the field increasing to 12 teams, some will like their chances to unseat the perennial champions.