After a six-month stint on the International Space Station (ISS) that ended this past November, it's high time for another high point: Alexander Gerst has been honored with the Federal Cross of Merit.

It's a great moment for Germany's favorite astronaut, Alexander Gerst: German President Joachim Gauck has awarded him the Federal Cross of Merit.

He's not the only one who is happy about it -about 200,000 people follow 38-year-old Alexander Gerst on Twitter, wherever he goes. But a great deal of work lies behind his fame.

Under Gerst's Twitter handle @Astro-Alex - by which he is perhaps better known than his real name - he tweeted before, during and after his stint on the ISS. The account has registered nearly 3,000 Tweets since its inception.

Mission within a mission 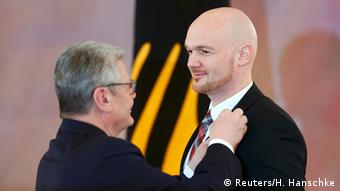 To Gerst, being an astronaut seemed to be an affair of the heart. His enthusiasm and social media savvy generated excitement and interest where there was none before for space travel, astronauts and the ISS.

Now, his hard work and outstanding spirit has been awarded with a Federal Cross of Merit: one of the highest honors that the Federal Republic of Germany can confer.

"I'll soon be with President Gauck," Gerst tweeted. "I must admit, I am a bit nervous. I somehow feel better prepared for going out into space!"

Gerst was the 11th German to travel into space. Originally a geophysicist, he was selected to become an astronaut by the European Space Agency (ESA) in 2009, and left for the ISS on May 28, 2014.

The German astronaut quickly became a social media darling. He shared not only interesting insights into his work, but personal information as well. Those who followed Gerst's Blue Dot mission came to know that Gerst missed beer and pizza the most while in space. #

But they also learned detailed information on the experiments he conducted - and could even watch him on his spacewalk, along with his colleague Reid Wiseman from the United States.

During those six hours in open space, Gerst and Wiseman managed cleanup, replacement and installation tasks on the exterior of the station. Before Gerst, only two other Germans had ever "walked" in space: Thomas Reiter and Hans Schlegel.

Gerst also followed current events down on earth, calling a picture he took of rockets exploding over Israel and Gaza "his saddest photo yet."

The astronaut shared pictures of himself wearing a team jersey of the German national football team after they won the World Cup. A photo of Berlin on the 20th anniversary of the fall of the Berlin Wall, was captioned saying that no borders are visible from so far away.

While on the ISS, Gerst also fielded questions from schoolchildren, and maintained a blog detailing the progress of his experiments.

Germany's Gerst, Russian and US astronauts back on earth

German astronaut Alexander Gerst and his US and Russian colleagues have landed safely in Kazakhstan. The three astronauts had spent 165 days on the International Space Station. (10.11.2014)

Alexander Gerst has become the third German to venture into open space, obviously with the assistance of a protective suit. The ISS resident teamed up with Reid Wiseman to conduct equipment repairs and maintenance. (07.10.2014)

The German astronaut, Alexander Gerst, will live and work on the International Space Station for six months. He leaves Earth this Wednesday. We look back at how he has preparation for the trip. (27.05.2014)

Training for the space station