Tirana has accused Tehran of launching a cyberattack. Iranian diplomats and embassy staff have been ordered to leave within 24 hours. 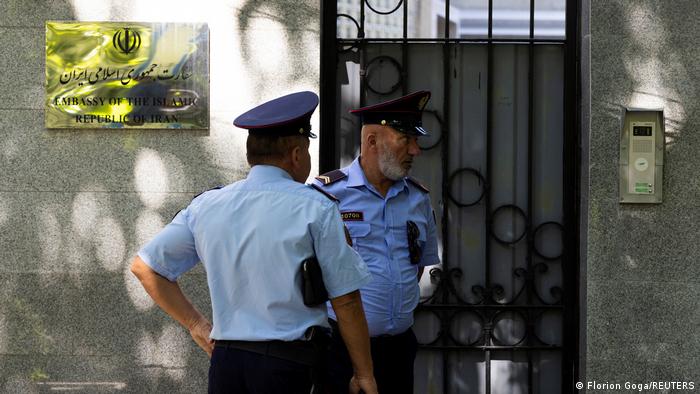 Albania ordered Iranian diplomats and embassy staff to leave within 24 hours. Pictured are Albanian police standing in front of the Iranian embassy in Tirana.

Rama accused Iran of launching a massive cyberattack against Albania.

What did Albania's prime minister say?

"The Council of Ministers has decided on the severance of diplomatic relations with the Islamic Republic of Iran with immediate effect," said Rama.

Tirana says that the attack on Albanian institutions occurred on July 15.

Albania's prime minister said that the "extreme" response was "fully proportionate to the gravity and risk of the cyberattack."

Tirana has ordered Iranian diplomats and embassy staff to leave within 24 hours.

The White House said that it strongly condemned the cyberattack on NATO ally Albania, and that it had concluded that Iran was behind the attack.

Strained relations between Albania and Iran

Relations between Tirana and Tehran have been under strain for a number of years.

In 2013, Albania resettled members of the People's Mujahedin of Iran (MEK) miltiant group, which advocates for the overthrow of the Iranian government. The MEK regularly hold summits in Albania.

After Tirana welcomed the assassination of Iranian General Qassem Soleimani in a US drone strike in 2020, Iran's supreme leader called Albania a "small but evil European country" which harbors "Americans and traitors against Iran."

Tirana has expelled two Iranian diplomats for "violating their diplomatic status." The two countries have been at loggerheads after Albania took in thousands of members of an Iranian opposition group in 2016.