An overnight blaze at a plant in Germany will almost certainly affect the assembly of all Airbus models, according to the factory's owner. The plant in Augsburg produces the fuselages for some 600 planes annually. 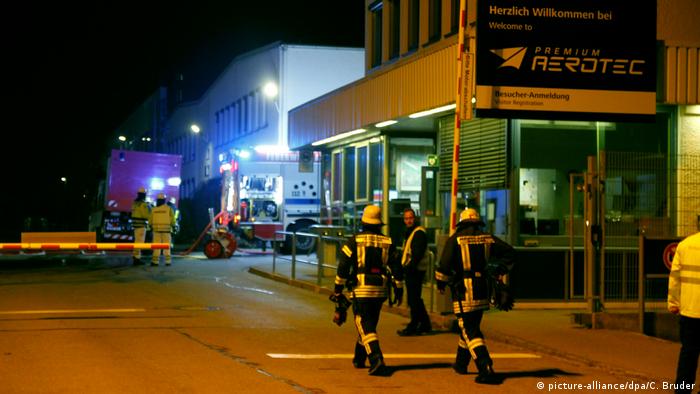 A major fire at Airbus subsidiary Premium Aerotec in southern Germany overnight into Friday has left several million euros worth of damage, a company spokesperson said.

According to media reports, the fire broke out in an surface treatment area of the factory in Augsburg, 30 kilometers (19 miles) northwest of Munich.

No one was in the building when the fire broke out; the cause of the blaze is still unknown.

According to regional newspaper Mercur, it took firefighters several hours to bring the blaze under control.

The plant primarily delivers fuselages for civil and military aircraft to Airbus, and the company said it believes "virtually all Airbus models" will now be delayed.

Airbus, meanwhile, said it would take several months until parts produced in Augsburg could be finished and added to airplanes.

Premium Aerotec has around 10,000 employees; almost half of them work at the Augsburg headquarters. Four other German factories, along with one in Romania, help produce whole sections of fuselage for more than 600 new Airbus aircraft annually.

Production at Airbus has already been plagued by delays at its engine suppliers, impacting deliveries of its new generations of passenger jets, and a series of technical problems with its A400m military transport plane.

Airbus's spurned A380 superjumbos to be stripped for parts

Once dubbed as symbols of European aerospace prowess, two of Airbus's unwanted A380 superjumbos face the ignominy of being broken up for spare parts after failing to find an airline willing to keep flying them. (05.06.2018)

Airbus to axe thousands of jobs in Europe

The aerospace giant plans to cut more than three thousand jobs as it aims to scale back production of its troubled A380 superjumbo and A400M military transporter — Europe's biggest civil and military plane projects. (07.03.2018)