AIDS expert Brockmeyer: ″We have to take prevention much more seriously″ | Science | In-depth reporting on science and technology | DW | 01.12.2017

AIDS expert Brockmeyer: "We have to take prevention much more seriously"

By 2030 the AIDS epidemic should be overcome – that's the goal of the United Nations. Already today 15 million patients have access to anti-retroviral drugs, which is something to celebrate on this World AIDS Day. DW: Worldwide there are about 36.5 million people infected with HIV. Now almost half of them have access to anti-retroviral therapies. Those drugs enable patients to grow old with HIV. The World Health Organization is hopeful that more and more people can get access to such drugs and that the AIDS epidemic can be brought under control by 2030. Germany is already on the right path, even though there are 85,000 people with HIV.

Professor Brockmeyer, how many more people get infected every year in Germany? 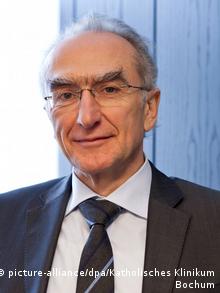 Norbert Brockmeyer: In 2016, there was a decline in new infections which stood at around 3,200. The situation has stabilized, in fact newly diagnosed cases are even less, now. However, we are seeing a slight increase among heterosexual people. But this could still be in the margins of statistical variability.

The overall trend concerning HIV infections is very good. One reason for that is the very good therapeutic options we now have. In Germany, a lot of patients are being successfully treated with the result that they are not infecting others anymore.

What does that mean for the psyche of those patients?

It means a lot for their psychological health. If they are not infectious anymore, it is like a liberation. Some have described it like this: "Since I know that I am not infectious anymore, I have become another person. I can behave and move around like everyone else and don't have to hide anymore or be afraid of infecting someone." This is a huge success and strengthens those who are HIV positive.

Which other positive changes have you noticed in recent years?

There are wonderful perspectives we have now – which were unthinkable 10 years ago: The possibility that the patients can have a life expectancy like anybody else. It is great that we have achieved that. But we still have to take prevention much more seriously. Here in Bochum – at the Centre for Sexual Health and Medicine – we have developed a system in the last six months, which enables HIV-positive people [that often change sexual partners] to anonymously inform sexual partners about the need to get tested.

And you have developed a risk test. How does that work?

With the risk test people can check several things: With whom did I have sexual contact? What are my sexual preferences? And then they can get advice about what to do about prevention and other aspects. It also deals with the question of whether someone should get tested and which possibilities there are to get tested and receive therapy. And finally, there is the question of "pre-exposure prophylaxis" (PrEP).

For people, who do not like to go to a doctor, we offer a self testing kit. People who have received a consultation in our center can then test themselves at home by taking some blood from their finger and sending it to a lab.

Practically, it is a possibility to test yourself at home. For people who are inhibited and cannot go to a doctor this opens up new possibilities. This is another offer for people to get themselves tested – for people who really need it.

What kind of prevention measures can people take?

Besides condoms people with a high risk of getting infected with HIV do have additional options. For people who do not manage to use condoms, because it leads to erectile dysfunction or they have allergies, there is the PrEP medication. This means, that people, who do not have HIV take two kinds of substances, which were originally developed for HIV therapy. Then, they are protected against an infection. While health insurance companies in Germany do not pay for the medication, the price has gone down dramatically. Currently you can get it for roughly €50.

In the past, these substances cost anywhere from €500 to €800. What happened?

We are talking about medicine that was originally called Truvada. The patent for it has run out. Since then, five or six companies started producing it as a generic drug. That led to an initial decrease in the price to about half the original. In addition there were PrEP campaigns which drove the price down even farther. This is a huge success. It also shows that with tough negotiations it is possible to drive down the costs for life-saving therapies and medications.

What are the main preconditions to further reduce the number of new infections?

Most important is informing people about how to protect themselves, and about how to talk to their sexual partners about the issue. Many people are afraid to even address the issue. Sexuality is still a big taboo. Those with HIV are stigmatized. You don't talk about it. Therefore, the question is: How can I talk to my partner about HIV and other sexually transmittable infections – in a way that sex is actually still possible?

Professor Norbert Brockmeyer is the director of the Centre for Sexual Health and Medicine at the University Clinic of Bochum.

Italian man sentenced to jail for infecting 30 women with HIV

An HIV-positive man has been sentenced to 24 years in jail for infecting at least 30 women despite knowing his status. The Italian man convinced women to have unprotected sex with him by saying he'd recently been tested. (28.10.2017)