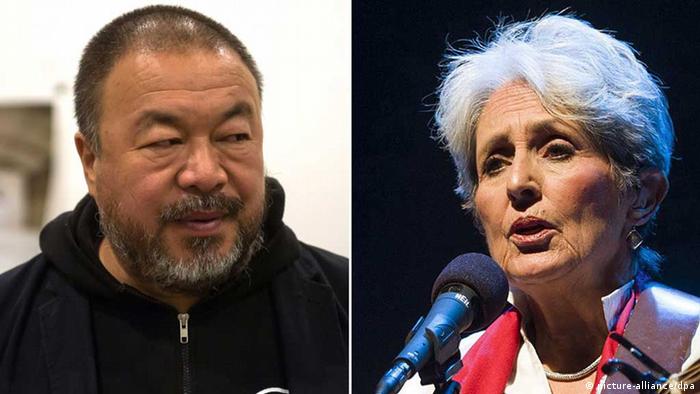 In a statement released Tuesday, Amnesty said the award recognized people who showed exceptional leadership in the fight for human rights.

"Through his work Ai Weiwei reminds us that the right of every individual to express their self must be protected, not just for the sake of society, but also for art and humanity," Amnesty's Secretary General Salil Shetty said in a statement.

The 57-year-old internationally renowned Chinese artist is an outspoken critic of his country's ruling Communist Party. In 2011, he was jailed for 81 days without charge and remains banned from leaving China. However, that hasn't stopped him from creatively continuing his work.

Joan Baez, 74, has for decades been involved in the United States civil rights movement, taking part in the 1963 March on Washington alongside Martin Luther King. She has campaigned against the death penalty and in support of pacifism and gay and lesbian rights.

Of Baez, Shetty said "With her mesmerizing voice and unwavering commitment to peaceful protest and human rights for all, Joan Baez has been a formidable force for good over more than five decades."

The joint award is due to be presented in Berlin on May 21, however Ai is not expected to be able to collect it as he is still under close surveillance and unable to leave China.