The cause of Nepal's recent corn crop failure remains a major mystery. A government investigation is focusing on the possibilities of bad GM seeds or extreme weather, but it is struggling to find proof. 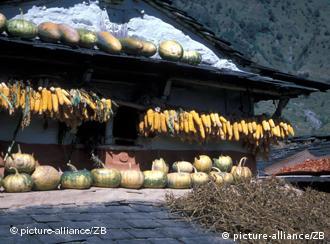 Corn has become a major staple in Nepal, so crop failures are a painful blow

In late 2009 and early this year Nepal suffered a massive corn crop failure.

Thousands of peasants were ruined financially, and they blocked roads and blockaded government buildings in protest. 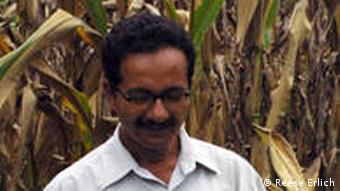 According to one peasant farmer, who tends goats and raises subsistence crops – including corn – in southern Nepal, last year's crop failure devastated farmers in her region.

"I heard all of the corn grew, but none of the cobs had kernels in them," she said.

Some farmers blame multinational companies who sold the seed. A government investigation is examining that theory, but it has also focused on another potential culprit: extreme weather.

Chitra Kunwar, a government agronomist, has been examining test corn to determine what caused the seeds to go bad.

"These are the problem varieties, right here in these three rows," he said, pointing to corn that has grown four meters tall.

Indian and US manufacturers said unusually cold weather was to blame for the crop's failure, but South African farmers reported a similar incident two years ago with Monsanto's genetically modified corn.

But Kunwar faces additional obstacles: He has been unable to conduct his tests properly without the original samples, and the local suppliers – called agrovets – aren’t providing them.

"But they would ask the multinational companies that sold them the seeds for more seeds. And if they got more seeds, they would give them to us."

Even asking the multinational companies to produce samples of the seeds is complicated, which meant Kunwar did not have access to every type of corn that was sold.

"We don’t exactly know because the multinational companies have agents we have to talk to, like a middleman," he said.

Seeds from three Indian companies, as well as American manufacturers DuPont and Monsanto, have been found in Nepal. Contacted at their US headquarters, a Monsanto spokesperson said the crop failure was caused by unusually cold weather, not by any problems with the seeds.

But Nirval Gadal, a Nepali agronomist working at an international agricultural NGO, said smuggling seeds by middlemen is a huge problem.

"According to the Seed Act, these seeds must be registered with the National Seed Board and before the farmers do planting, it should be tested by the laboratory," Gadal said. "And the public organizations should keep that seed lot as a sample so that if there are problems, we can test it later." 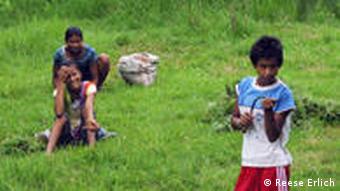 Subsistence farmers in southern Nepal are highly dependent upon their harvests

Foreign companies know that farming regulations are not well enforced in Nepal, and Gadal said it poses a major challenge there: "They come directly to the farmers, the staff of the multinational companies. They do demonstrations for them. They give training to them. They sell the seed without giving information to government offices."

Four years ago, Nepalis overthrew a dictatorial government, but forming a new and effective administration has been difficult.

"Our regulatory mechanism is very weak," Gadal said, noting an open border with India that allows easy entry. "By taking advantage of this weak regulatory system, they can come directly to the farmers to sell the seeds," Gadal added.

Scientists working at an agricultural testing station have been trying to duplicate last season’s conditions. They know that peasants planted foreign hybrid seeds, but they do not know whether they were genetically modified organisms, known as GMOs, or conventional hybrids.

Dilip Paudel, who has been working at the testing station, said all foreign hybrid seeds are unsuitable for Nepal because they have not been bred for local conditions.

"Here at the National Maize Research Program…we have good varieties of maize that have been tested here," Paudel said. "They’re open pollinated varieties, not hybrids."

Paudel said those types have proved successful in Nepal, "whereas GMOs can be dangerous because they’re brought from the outside and they’re a risk."

In Kathmandu, agronomist Gadal thinks the massive corn crop failure is likely due to a mixture of bad hybrid seeds and extreme weather, but without proof, he can't be sure.

"If we see the climate conditions that happened between October and February, 2009 to 2010, the temperature has gone down," Gadal said. "This is very true – it is beyond this problem, beyond climate change, because we saw there were other deformities in the maize crops."

Gadal said those deformities were likely caused by sterile or otherwise altered seeds.

Government scientists are expected to announce the results of their tests soon. But without seed samples, agronomists may never know the full story.

Ongoing tensions between former Maoist guerrillas and the Royal Nepalese Army – which enjoys traditional parties' support – stand to hamper efforts to elect a prime minister and write a new constitution. (02.09.2010)

Nepalese refugees from Bhutan and their resettlement in third countries

In the early nineties, a conflict between the Bhutanese and the ethnic Nepalese minority shattered the image of Bhutan as an isolated but idyllic country. More than 100,000 Nepalese were expelled from the country. (21.07.2010)

Madhav Kumar Nepal has resigned in a bid to resolve the ongoing political crisis and save the peace process. He had been under pressure to resign since his party made a power-sharing deal with the Maoists last month. (30.06.2010)