Auction house Sotheby's has completed the two-day sale of artworks and design items belonging to the late musician and collector David Bowie. The proceeds, which will go to Bowie's estate, totaled $41.1 million. 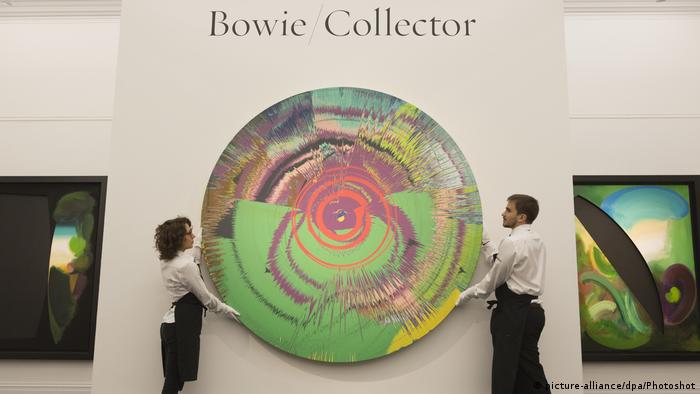 Following the first day of the sale in London, a further 300 art and design items were sold on the second day of the auction on Friday.

Fifty-six records were set over the course of the two-day sale, which totaled $41.1 million (37.8 million euros).

The sale attracted attention both in the sale room and online after exhibitions of the works were organized in New York, Los Angeles, Hong Kong and London. Interest in Bowie's life and work had attracted huge interest, even before his death. The "David Bowie Is" exhibition, which opened at the Victoria and Albert Museum in 2013 before moving to eight other locations around the world, was seen by 1.5 million people.

During the two-day London sale, the soundtrack from "Ziggy Stardust: The Motion Picture" played in Sotheby's auction rooms as the late musician's artworks were sold. The items on sale represented about 65 percent of the work Bowie acquired in the 1990s and 2000s, according to Sotheby’s.

The pieces were chosen by Bowie's family from his vast collection with more than 200 works by many of the most important British artists of the 20th century, including Damien Hirst, William Tillyer, Frank Auerbach, Harold Gilman, Peter Lanyon, Henry Moore and Graham Sutherland.

In an interview printed in the catalog, Hirst recalled Bowie turning up in a designer suit at his studio: "I remember telling him to come to the studio in old clothes, but he turned up in brand-new expensive clothes; he said he didn't have any old clothes."

There were also sales well above the expected price for designer collections owned by the late musician, including for salt and pepper shakers.

On a wall outside the auction room there was a quote from a 1998 interview Bowie had given, referring to Marcel Duchamp, the French artist known along with Picasso and Matisse as one of the three men to have defined the revolutionary developments in the plastic arts at the start of the 20th century: "Sometimes I wish that I could put myself in Duchamp's place to feel what he felt when he put those things on show and said: 'I wonder if they'll go for this. I wonder what's going to happen tomorrow morning.'"

The first part of David Bowie's art collection has made more than 27 million euros at auction in London, well above the estimate. A further 300 works are to be sold on the second day of the auction. (11.11.2016)

It's the house David Bowie shared with Iggy Pop. Bowie also wrote his Berlin trilogy of albums there. Now the address in Schöneberg is more attractive for fans and tourists: It's been decked out with a plaque. (22.08.2016)