The first part of David Bowie's art collection has made more than 27 million euros at auction in London, well above the estimate. A further 300 works are to be sold on the second day of the auction. 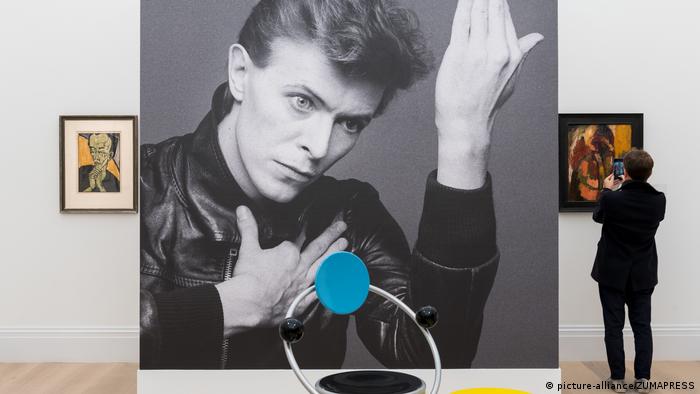 The highest-selling item on the first day of the sale of David Bowie's mainly modern art collection at Sotheby's in London was the graffiti-inspired "Air Power" canvas by modernist Jean-Michel Basquiat, which sold for 7.09 million pounds ($8.9 million, 8.2 million euros). It was expected to sell for between 2.5 and 3.5 million pounds. Another work by Basquiat, "Untitled" sold for 2.4 million pounds, well above the estimate of 500,000 to 700,000 pounds. The American artist died in 1988, aged 27 years.

The second-highest sale on Thursday was for the 1965 "Head of Gerda Boehm" oil painting by Frank Auerbach, which was bought for 3.8 million pounds after a pre-auction estimate of 300,000 to 500,000 pounds. Bowie had said of the painting "I think there are some mornings that if we hit each other a certain way, myself and a portrait by Auerbach, the work can magnify the kind of depression I'm going through," Bowie told the New York Times. "It will give spiritual weight to my angst."

The paintings were among the 47 art works auctioned on Thursday for a total of 24.3 million pounds. The proceeds will go to the estate of the British rock musician who died in January.

"It's a remarkable collection, and it's an eclectic collection," said Frances Christie, the Senior Director of Sotheby's Modern and Post-War British Art department. "It gives you a different insight into his creative mind. People aren't very aware of this aspect of David Bowie's life, but his interest in art was certainly known in the art world in London in the 1990s. And I think what he collected really gives a window into how intellectual he was as a collector."

Three works by Damien Hirst were also sold, including a collaborative work with Bowie "Beautiful, hallo space-boy," which went for 785,000 pounds.

A further 300 works are to be sold at Sotheby's on Friday.

The Sotheby's sale was previewed with exhibitions in New York, Los Angeles, Hong Kong, and then London. The pieces were chosen by Bowie's family from his vast collection with more than 200 works by many of the most important British artists of the 20th Century, including Damien Hirst, William Tillyer, Frank Auerbach, Harold Gilman, Peter Lanyon, Henry Moore, and Graham Sutherland.

Two tribute concerts dedicated to music legend David Bowie are taking place in New York. With a star-studded line-up, the gigs sold out within hours of being announced. (01.04.2016)

Following the death of British music legend David Bowie, an online petition has been launched to name a street after him in the German capital. Bowie lived in Berlin's Schöneberg area in the 1970s. (12.01.2016)