After COVID, EU will be 'stronger,' says Spanish health minister

Spain's Health Minister Salvador Illa explains how the EU is fighting the coronavirus second wave together. And why he is "worried" about the pandemic during Christmas holidays. 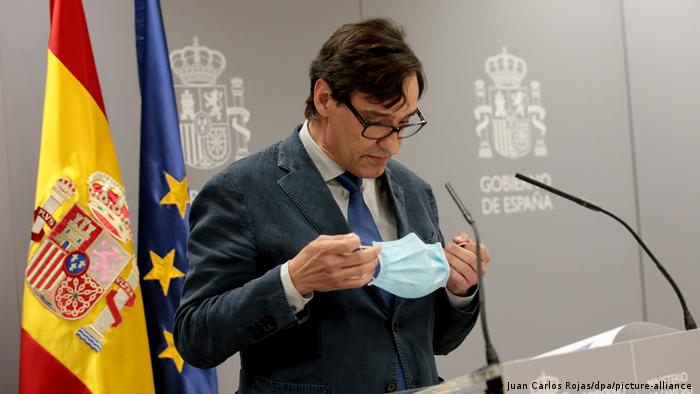 Spain's health minister said that the European bloc will emerge from the coronavirus pandemic as "a stronger union," in comments to DW on Tuesday.

The EU's vaccine strategy was an example of this, Salvador Illa told DW, adding: "This has been a success for Europe: a common policy to reach the advanced purchase agreements of a minimum of seven vaccines and to distribute them in an equitable way among European citizens."

His comments come as Italy, Belgium, France, Germany, Italy, Luxembourg, the Netherlands, Spain and Switzerland, confirmed on Tuesday they willcoordinate the start of their vaccination campaigns against the novel coronavirus.

Spain was one of the countries hit hardest by the first wave of COVID-19 in Europe. The government imposed an extremely restrictive lockdown – at the time one of the toughest in the world.

The government declared a second state of emergency in October with new restrictions such as night-time curfews to stem resurgent infections. This helped reduce new cases to less than 200 per 100,000 people this month, reported news agency Reuters.

Illa defended Spain's internal travel restrictions, saying "restricting mobility" was "a way to combat this virus" and did not threaten EU unity.

'This should be a very special Christmas'

While Spain was managing the virus second wave in an "acceptable way," Illa said he was particularly "worried" about the Christmas period. This was due to the "very unstable" health situation. "We have seen whole situation change in some countries in a very quick way — in a sudden way."

"This is why we have agreed with all the regional governments of Spain [to a] Christmas plan — telling people to remain at home, not to travel [or to carry out] only essential travel or indispensable travel, and to limit to restrict the social contact to the closest members of the family."

Spain's health minister said he was confident that Spanish citizens understood "that this should be a very special Christmas."

Additionally, Illa responded to claims that Spain had turned people away while prioritizing others for coronavirus treatment during the early stages of the pandemic.

At the end of March and April there were "clear reports of the bioethics consultancy body of the health ministry of Spain saying that there should not be any discrimination based on sex, religion, age in order to access COVID-19 treatment. And I have no evidence of such discrimination," Illa told DW.